The company is looking to develop an underground mine at the former open-pit mine site about 55km east of Adelaide and is approaching a Final Investment Decision with production potentially re-commencing as early as next year,

The underground technology is being developed in Australia by global manufacturer Komatsu, which says the MC51 continuous mining machine has the potential to revolutionise underground mine development by making underground operations safer, faster and more cost-effective, in addition to reducing operational emissions for mine sites.

The electric driller will be used to develop a portal and 500m underground decline at the Kanmantoo Mine.

The trial will focus on demonstrating the commercial viability of the machine and trial new materials handling and ground support processes that will potentially bring forward first copper production and reduce development costs.

Hillgrove says the use of commercial machines also has the potential to remove blasting from mining development, improving safety and community outcomes, as well as reducing blast-related operational delays.

CEO and Managing Director Lachlan Wallace said the trial at Kanmantoo was an important collaboration between the State Government, Komatsu and Hillgrove.

“The development of an underground decline and drill platforms represents an exciting milestone for the Kanmantoo Underground which ultimately brings forward the potential restart of copper production and further reduces what is already a relatively low-cost mine development,” he said. 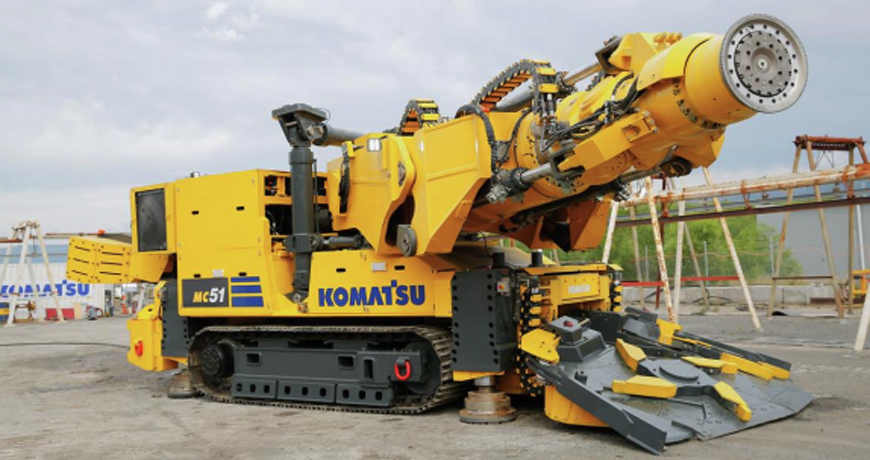 The Komatsu MC51 will be trialled at Kanmantoo.

Hillgrove ceased large-scale mining at the open pit copper-gold mine in May 2019 and completed processing ore stockpiles there in March last year.

It entered an agreement with energy retailer AGL in April 2019 to sell the right to develop, own and operate a pumped hydro energy storage project at the site but that deal was terminated in February 2020 after conditions could not be agreed to by both parties.

The Kanmantoo site was then mothballed to preserve the processing assets, and a small core group retained to focus on growth through the advancement of the Kavanagh underground studies and the continuation of a measured exploration and development program.

The $2 million Jobs and Economic Growth Fund grant from the South Australian Government grant is awarded in two tranches in arrears and based on the achievement of milestones.

Hillgrove has agreed to repay half of the grant proceeds received via a 0.25 per cent royalty 12 months after first copper sales from the Kanmantoo Underground if the trial is deemed successful.

Success is measured by the machine demonstrating a range of technical requirements and meeting a minimum production rate over at least 350m of decline development, and the subsequent development and production from the Kanmantoo underground mine.

“This has attracted widespread interest from Industry, which will observe the trial first-hand. I’m optimistic this trial will help develop ways of mining underground more safely, quickly and sustainably – all that would mean more copper, which means more jobs, more growth and more royalties back to taxpayers.”

The grant announcement coincides with the State Government’s Copper to the World Conference today at the Adelaide Convention Centre where Wallace is speaking about Kanmantoo, which Hillgrove is touting as Australia’s next copper mine.

South Australia produces more than a quarter of Australia’s mined copper and includes a number of long-life deposits, including Prominent Hill, Carrapateena and Olympic Dam, which is the fourth largest copper resource in the world.