Australian wine exports during 2020–21 declined by 10 per cent in value to $2.56 billion, compared with the previous financial year, while export volume declined by 5 per cent to 695 million litres.

Since the imposition of import tariffs in late November, exports of Australian wine to mainland China have dropped dramatically.

However, the losses have been partly offset by a booming UK market, which was up in value by 23 per cent for the year to $472 million and also up 16 per cent in volume to 269 million litres.

Wine Australia General Manager Corporate Affairs and Regulation Rachel Triggs said the downturn in exports to mainland China and the cumulative effects of three consecutive lower vintages in 2018, 2019 and 2020, which meant there was less wine available to export, were key factors in the decline.

Triggs said exports to the UK were at their highest level in a decade, making the UK the biggest destination for exports by volume and the second by value.

“Exports increased to the UK, Singapore, South Korea, Malaysia, Taiwan and Hong Kong by a combined $240 million, but they did not offset the decline in exports to mainland China,” she said. 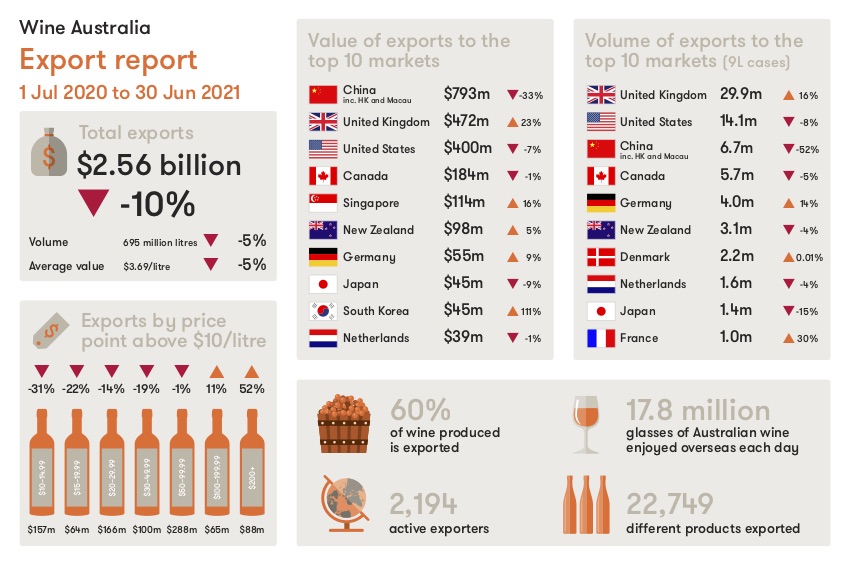 The growth in exports to the UK was much stronger in the first half of the year, due to the surge in retail wine sales spurred by the COVD-19 related lockdown as well as some exporters sending wine into the market ahead of Brexit.

South Australia produces 50 per cent of the nation’s wine and about 40 per cent of Australia’s wine production is typically sold domestically and 60 per cent exported.

Over the past decade, exports to China had grown steadily, peaking at $1.28 billion in 2019, about 44 per cent of all wine exports by value.

The tariffs were extended for a further five years on March 28 this year.

While the tariffs are virtually putting an end to Australian exports to the mainland, Chinese drinkers in Hong Kong still have a taste for Aussie wine with exports to Hong Kong up 111 per cent for the year to $187 million.

This translated to a 3 per cent increase in the average value of bottled exports to $7.26 per litre.