The PointData Lay of the Land Winter Edition, released last week, found that 13 of Adelaide’s 18 metropolitan councils would experience gains in land value from potential subdivisions as a result of the new planning and design code, which came into effect in March.

The new laws aim to streamline the planning process to improve consistency in decision-making and assessment across Adelaide.

Previously, councils could largely set their own rules around subdivisions, leading to often confusing fluctuations in what was allowed in different jurisdictions.

The report found that every subdivision would result in an average land value increase of $187,000 per subdivided block.

The Adelaide-wide rules mean land parcels in Gawler, Adelaide and Salisbury LGAs can now be automatically assessed for subdivision potential for the first time. Previously they were dealt with on a case-by-case basis.

PointData analysis of the new laws found there were now 68,000 more potential subdivision sites in the metropolitan area.

However, some councils including Mitcham, Tea Tree Gully, Campbelltown, Unley and Walkerville have a reduced capacity for subdivision. 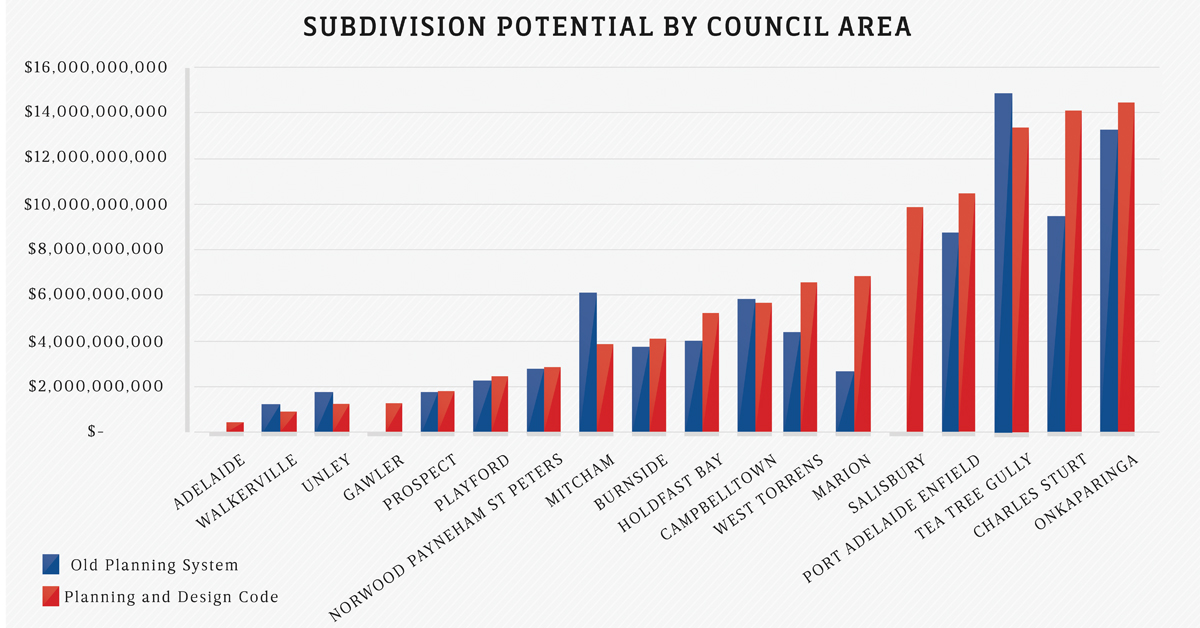 PointData lead data analyst James Edwards said while the actual impact of the planning law changes on subdivisions would likely take a few more months to flow through, the standardisation of the process should make the assessment and application process simpler for councils and developers.

“I think that is really part of the motivation from the Planning Commission to make the process simpler and to also make more sites available across metro Adelaide to increase the rate of infill subdivision,” he said.

“Traditionally what we’ve found is developers have been very location specific – they’ve got to know a certain council area and they’ve learnt what works there.

“What you end up with then is a concentration of development, which is not always a good thing. But this means a developer who has traditionally worked in Campbelltown can now look for land in Charles Sturt or Onkaparinga and the same principles and process will apply.

“Hopefully it increases opportunities for homebuyers across the state as well in terms of having a broader range of offerings.”

Eleven of the top 20 growth suburbs were in the leafy eastern suburbs. Postcodes south of the city from Brighton to Aldinga also performed well.

Poor performers were mainly city apartments and parts of Glenelg North and Prospect where there had been a number of subdivisions and there had been a market correction after several previous months of strong performance.

“The eastern suburbs is where the strength in the property market has sat for a long time – they’re desirable areas and they will always lead the market to some degree,” Edwards said.

The continuing development of the South Rd corridor is probably assisting the southern suburbs to some degree but also I suspect that in the past 12 months with a lot more people being able to work from home, the attraction of a larger suburban home has increased as travel time to the city becomes a reduced disincentive.”

In the week leading into the June long weekend, 86 per cent of auctions in SA resulted in a sale, which was the highest clearance rate across the capital cities.

Edwards said this was more evidence of strong demand in Adelaide.

“On top of that we’re seeing a large number of houses that are selling prior to auction because the competition is that strong.

“The number of properties we are seeing going to auction is far higher than we’ve seen in recent years and that indicates confidence among sellers that they will get the interest and they will get competitive bidding.”