The Australian Energy Market Operator last month predicted that growth in renewable energy generation and reduction in gas use across the state would drive down tariffs and reduce future wholesale prices.

According to the energy body’s first-quarter energy dynamics report, South Australia is expected to have the lowest average wholesale prices in the country by the start of 2022, with future prices expected to continue to drop.

This is a sharp turnaround from just six months ago when SA had the second-highest future wholesale price behind New South Wales.

South Australian households and businesses have been plagued by high energy prices for several years with the state earning the tag of having the most expensive electricity in the world in 2017.

Although the rise of renewables has helped the state shrug that tag, material savings are yet to be passed on to consumers.

Keith Kikkert, adjunct associate professor in electrical and electronic engineering at both James Cook University and the University of Adelaide, said AEMO’s futures market reflected low wholesale prices across the first quarter of 2021.

“The prices, particularly in South Australia are falling, and South Australia for the first time ever had negative average prices during daylight hours for the whole quarter,” he said.

“That’s the first time in any quarter in any region that there have been negative prices on average, because the solar has been increasing.”

Kikkert said wholesale prices were being driven by low spot prices across the mainland and less reliance on coal power, coinciding with a reduction in the fixed-price contract between generators and retailers known as swap prices.

Despite the falling wholesale prices – and a retail price decrease of close to 10 per cent over the past 12 months – Kikkert said South Australian households should not expect to have the lowest household bills in the near future.

Wholesale prices make up about 30 to 40 per cent of retail bills while the cost of poles and wires and transporting electricity accounts for about 45 per cent. The direct cost of government schemes, such as the renewable energy target, is a further 15 per cent and retailers services are the remaining costs.

“South Australia used to have the highest wholesale prices, but for the last couple of years because we’ve got more renewables we’ve had the lowest renewable prices,” he said.

“But the wholesale price is only about a quarter to a third of the retail price.

“The price depends on the population density, how much your poles and wires cost per person, how many retailers you have and how much profit they have etc.”

“I’ve ended up putting the cost of different retailers in a spreadsheet and adding up all of my imports and exports in order to find out the best contract for me,” he said.

The largest price reductions occurred in Victoria and South Australia, with both states dropping below Queensland for first time since 2014.

AEMO said South Australia’s swap prices had dropped $8 per megawatt-hour, making it the lowest price in the region for the quarter.

The market operator’s report also found South Australia’s average daytime prices consistently fell below zero for the first time in the market’s history across the first quarter, helping to drive down wholesale prices. 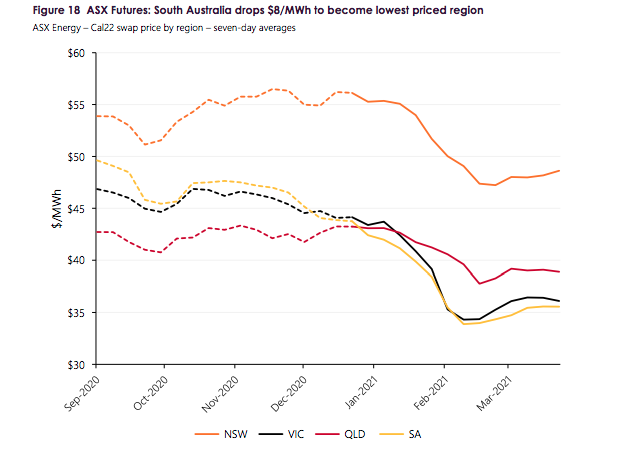 But a cable fire that caused the Torrens Island Power Station and Barker Inlet to be cut off on March 12 slightly increased the average price and highlighted generation vulnerability, according to Kikkert.

He said trading prices spiked to hit a high of $14,348 as a result of the fault.

“It shows the importance of interconnectors,” he said.

High-voltage transmission network owner ElectraNet last week announced it had given its commitment to proceed with the proposed SA-NSW interconnector to the Australian Energy Regulator, clearing the path for the regulator’s final approval stage.

ElectraNet is responsible for the South Australian section of the project, subject to the AER awarding incremental regulated revenue commensurate with the capital and operating costs of the project.

TransGrid has also lodged its final costings for its NSW section of the project.

ElectraNet says it is continuing to work proactively with the AER to progress the project through its last regulatory approval, with a final determination anticipated in the coming weeks. Following the AER’s determination, ElectraNet would then enter its Final Investment Decision phase for the $2.4 billion project.