However, mild conditions have prolonged the growing season, allowing wine producers to extend the vintage to help combat the worker shortage.

SA Wine Industry Association chief executive Brian Smedley said while backpackers had traditionally filled short-term grape picking and cellar hand type roles, there was also usually an influx of more skilled workers such as winemakers heading to Australia from the northern hemisphere who were simply not here this year.

“It’s everywhere – we’ve got jobs vacant in a whole range of occupations right through our supply chain,” he said.

Smedley said he was aware of double-figure shortages in most regions.

He said the knowledge transfer to visiting winemakers and the skills normally gained by SA winemakers who headed to Europe and the United States for their vintages in the Australian spring would also be lost this year.

However, he said the relatively mild temperatures and cooler nights experienced across SA’s wine regions in recent weeks were a “blessing in disguise”.

“We’re actually having some stop/starts, which means it’s just going to take longer to do vintage than previous years and means our labour issues are being somewhat managed but it’s not ideal,” Smedley said.

On the hunt for new markets

China’s Ministry of Commerce (MOFCOM) announced the final determination in its anti-dumping and countervailing investigations into bottled Australian wine exports to China late last month with the extended time frame beginning on March 28.

Interim tariffs of between 116 and 218 per cent were introduced in November and are now in place for at least five more years.

The new tariff blow coincided with the ending of the JobKeeper subsidy but Smedley said this had been partially offset by the busy vintage period on the production side and the recent easing of restrictions on cellar doors.

“In terms of the tourism side of businesses, we have now moved from 50 per cent to 75 per cent capacity and we know that generally speaking weekends have been very busy and although weekdays are not as busy that tends to suggest that businesses are doing OK,” he said.

“Some businesses that have a model where they are exposed to the China market would obviously be facing more difficulty if they don’t have a diversification of income streams.”

Wine Australia export figures for the first quarter of 2021 are due to be released in late April or early May and will give the strongest indication yet of the impact of the Chinese tariffs, which came into force on November 28 last year.

The Australian Wine: Production, Sales and Inventory report released on March 30 shows national wine production from the 2020 vintage was just under 1.1 billion litres, 10 per cent below the 10-year average and the lowest since 2007.

The total volume of Australian wine sales in 2019–20 was just over 1.2 billion litres, of which 40 per cent was sold on the domestic market and 60 per cent was exported.

As a result, Wine Australia estimates that stocks of Australian wine and other grape products have fallen by approximately 70 million litres (4 per cent) to 1.7 billion litres, the lowest level since 2011–12. 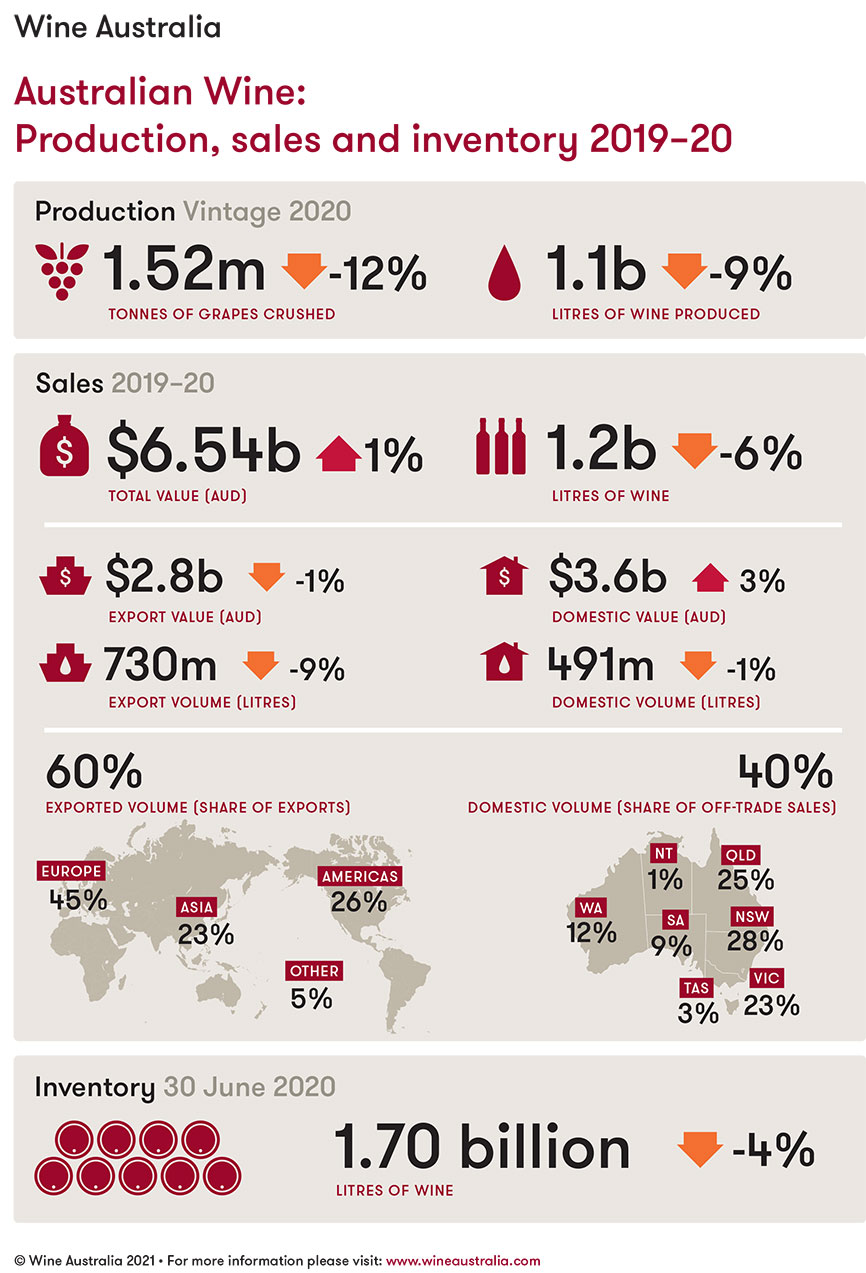 South Australia is typically responsible for about 50 per cent of Australia’s annual wine production.

Smedley said the state’s vintage was this year indicating a larger crush volume than 2019 or 2020 and was more in line with the 10-year average.

“For the upcoming vintage that means we’ve got room to store wine that’s going to be made and sold on for whites and put down for longer periods for reds,” he said.

“It’s certainly better than the opposite scenario where you’ve got high inventory levels, a strong vintage and going into a period where a major country (China)  is not being supplied.

“There are probably going to be some grapes that won’t find a home this year so while we say it is consistent with the long-term average, what’s actually made into wine will be an important consideration and that won’t be visible until at least a few months’ time.”

Despite the falls in Chinese exports, the value of Australia’s wine exports to its next four largest overseas markets – The United Kingdom, United States, Canada and New Zealand – all increased in the 2020 calendar year.

It is these markets and smaller emerging ones that wine companies are being encouraged to target to help make up the shortfall in Chinese orders.

Smedley said the inability to fly to new markets in person due to coronavirus border closures was hampering efforts to establish relationships with new buyers.

“Looking for new markets has started but it’s not going to be a quick fix to place all of the wine that would have gone to China in other markets – it will take one, two or three years depending on a whole range of factors,” he said.

“If you’ve got an existing relationship with distributors in other countries it may be easier for you to place additional products but if you are looking to go to new markets, given the lack of travel options, it’s going to be challenging.”

A number of vineyards have been put on the market in recent months but Smedley said at this stage it was nothing above normal levels.

He said there had already been some softening of red grape prices this vintage but white grapes had held up.

“Long term, when the GFC hit in 2007-08 we didn’t see some of those issues flow through to our industry for two or three years afterwards. I think the China situation will make it a little bit quicker but that will depend on how we are able to adapt and place product in other markets.”

Adelaide-based DMAW Lawyers has advised on a number of vineyard and wine business sales in the first quarter of 2021.

She said the law firm was yet to see distressed sales occurring in the wine sector, however, uncertainty as a result of the Chinese tariffs had created a buyer’s market.

“The impact of China’s tariff and the end of JobKeeper has many businesses assessing what their future looks like, whether that is exporting to other markets, bringing forward their succession plan, or exiting the wine business altogether.”

Foreign investment restrictions implemented last March as a result of COVID-19, which required all foreign investments to obtain approval from the FIRB (Foreign Investments Review Board), have now been relaxed.

Monetary screening thresholds were reduced to zero, requiring all foreign investments to obtain approval from the FIRB with the intent to prevent predatory behaviour by international buyers acquiring businesses in distress.

Surmei said foreign investment had slowly started to return following the lifting of the restrictions.

“For example, our firm is waiting for a response from FIRB for a small vineyard sale in the Barossa from September last year,” he said.

Strachan said although the outlook for the wine sector was challenging, Langley & Co was yet to see an escalation of vineyards or win businesses for sale.

“It is early days, and this will potentially change, however, I suspect that most owners will choose to ride out the current challenging environment,” he said.

“It is possible that the end of vintage will signal more sales, but again, this is fairly typical – we would expect to see vineyards coming onto the market after vintage.”