SA Venture Capital Fund Portfolio Manager David Rohrsheim led an assessment panel which analysed the applications of more than 200 award nominees and recognised the creativity, personal determination and philanthropic pursuits of some of the state’s best business people under the age of 40.

The nominees represented a plethora of industries including medicine, technology, finance, hospitality and more.

From more than 600 referrals and 200 completed nominations, a panel of 12 judges from across sectors came up with a shortlist of finalists, which were narrowed down to InDaily’s 40 Under 40.

The achievements, energy and innovation of the 40 winners (scroll down to see the full list) were celebrated at a scaled-back and socially distanced event at the National Wine Centre last night which, like events across the country, was postponed due to restrictions.

Rohrsheim told the audience that shortlisting the final 40 entrepreneurs was incredibly challenging.

“I note that these 40 individuals are all risk takers. Virtually every story we read had a moment where their venture or career could have gone bad,” he said.

“For every success story celebrated here tonight, I am mindful that there is another entrepreneur for whom it didn’t quite work out.

“Those folks aren’t in the room tonight, but we have to make an effort to celebrate everybody who is ‘having a crack’. Our State won’t get better if everything stays the same.”

He said each of the final 40 were highly innovative.

“The key question the judges asked when reviewing applications was: ‘Is our State better off with this person?’ For the 40 winners, the answer was a strong yes. If we could clone them into 400 people, we would,” Rohrsheim said.

“The future of South Australia is in good hands with them.

“Time is on their side, and it will be exciting to see what they do with the rest of their careers.”

SA Minister for Trade, Tourism and Investment Simon Birmingham said with the world facing the “biggest economic crisis” since the Great Depression, it would be through the State’s innovators that South Australia would make its way out of the global pandemic.

“That’s what tonight’s ceremony really is celebrating. It’s recognising that across South Australia we have such a breadth of talent driving new businesses, new concepts and in doing so driving new jobs for South Australians today and hopefully long into the future,” he said over video.

“Some of you will be working in exciting new areas of technology like defence and space tech, others will be driving, no doubt in the services sector.

“All of you are striving in ambitious ways to a stronger, brighter future for our state.

“Some may well be working in crucial parts of community services in support, and your roles, particularly in these trying and tough times is ensuring we have the leadership, the support and the services available for those doing it a little bit tougher than the rest of us.”

“Congratulations to those who are being recognised at tonight’s awards,” he said.

“You go on to join an incredible alumnus of South Australians who’ve done amazing things over the years and whose work we all rely upon to see us through the tough times and to give us the confidence that the better times, which we know can lie ahead, will be delivered.”

To coincide with the event, for the first time, InDaily’s sister publication CityMag has produced a special 40 Under 40 edition of the magazine profiling each of the winners.

As part of their awards prize, each winner will receive an invitation to a series of workshops providing key insights into business growth, business development and governance, and commercial legal issues. They will also be highlighted from Monday, starting with the First Among Equals winner in InDaily’s Business Insight email, and then profiles each day for the next two weeks.

These included an emerging industry award sponsored by Piper Alderman, the creative thinker award chosen by KWP! and the first among equals award, which is selected by the Australian Institute of Company Directors. 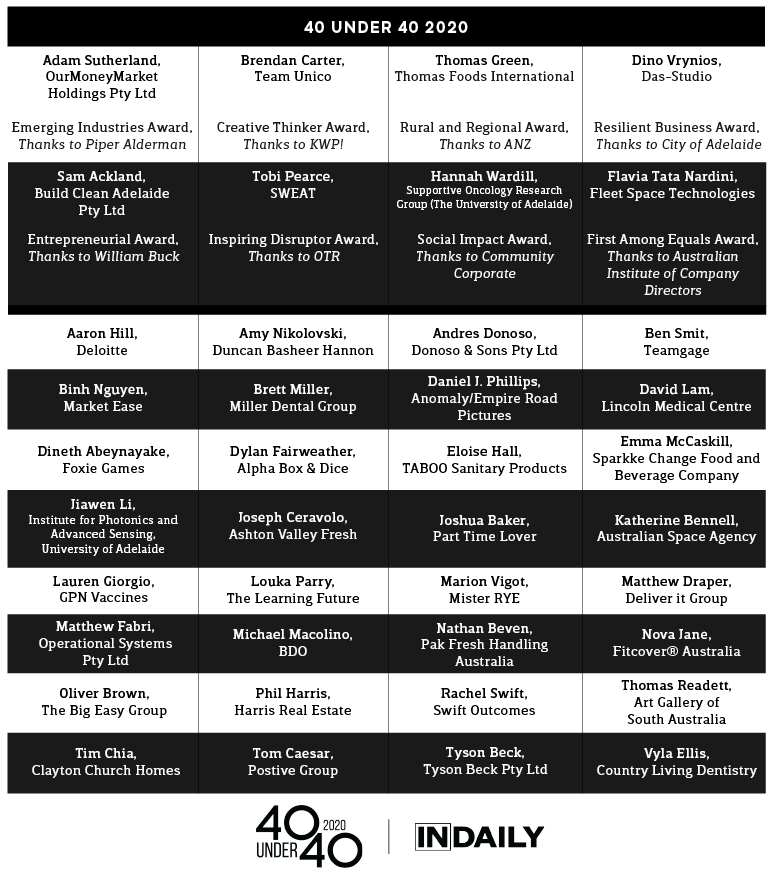 Keep in touch with the State’s talented young business leaders by joining South Australia’s 40 Under 40 on LinkedIn here.