The survey at the end of July and start of August found that the overall confidence of South Australian’s toward travel has softened as Melbourne goes into lockdown and other states increase restrictions.

However, Square Holes founder Jason Dunstone said they found that the intention to travel locally has remained, particularly among younger respondents.

“One in three South Australians have booked accommodation or travel locally since COVID-19 restrictions have eased, with this level highest for 18 to 34-year-olds and lower for those aged over 50,” Dunstone said.

At an overall level, Adelaide, Adelaide Hills, Yorke Peninsula, Barossa and Kangaroo Island were the most popular regions, particularly for 18-34-year-olds.

The most popular accommodation type booked or most likely to use was hotel/motel/apartment (32 per cent of those who had booked), followed by caravan park/powered camping site (24 per cent) and BnB, Air BnB/Rent Holiday Home (18 per cent).

“It is interesting that camping on a powered site was now significantly more popular for younger South Australians aged 18 to 34 to other age groups,” Dunstone said.

This was good news for Airbnb, which released findings on Friday it had commissioned from Oxford Economics arguing that “the platform’s community will play a key role in driving a long-term recovery in tourism and jobs growth” in South Australia.

According to the report, Airbnb contributed $350 million to Gross State Product and supported 3600 jobs for South Australians in 2019.

James Lambert, Oxford Economics’ Director of Economic Consulting in Asia, said Airbnb could help bring tourists back to the regions.

Dunstone said that half the respondents who indicated they were unlikely to travel in South Australia cited safety concerns surrounding COVID-19.

“I have no wish to travel while the outlook is still doubtful with COVID-19,” answered a typical respondent.

“Lack of finances was the next strongest reason at 16 per cent,” Dunstone said.

“The balance of reasons ranged from being housebound, saving for overseas travel for when it is possible, busy lives and a general preference to stay home.”

It found that travel trepidation remains across age groups because of restrictions increasing in Melbourne and elsewhere and signs that the impact of COVID-19 is far from at its end.

The Flinders survey also found South Australians are more inclined to holiday at home in the wake of the COVID-19 pandemic.

Conducted by senior lecturer in tourism management Dr Gareth Butler and geography lecturer Dr Gerti Szili, the poll of 810 adults is intended as a snapshot of what the future holds for local tourism businesses.

Butler said one surprise outcome of the survey was the number of people wanting to engage in planned exercise as a reason for travel, which he attributed to respondents living in high-density areas.

“Lots of people we surveyed have been based in urban settings,” Butler said.

“I think we are going to see a bit of a drive in terms of people wanting to get outside and back into nature, which is a good thing from a South Australia perspective because we are trying to position ourselves as a nature-based destination.” 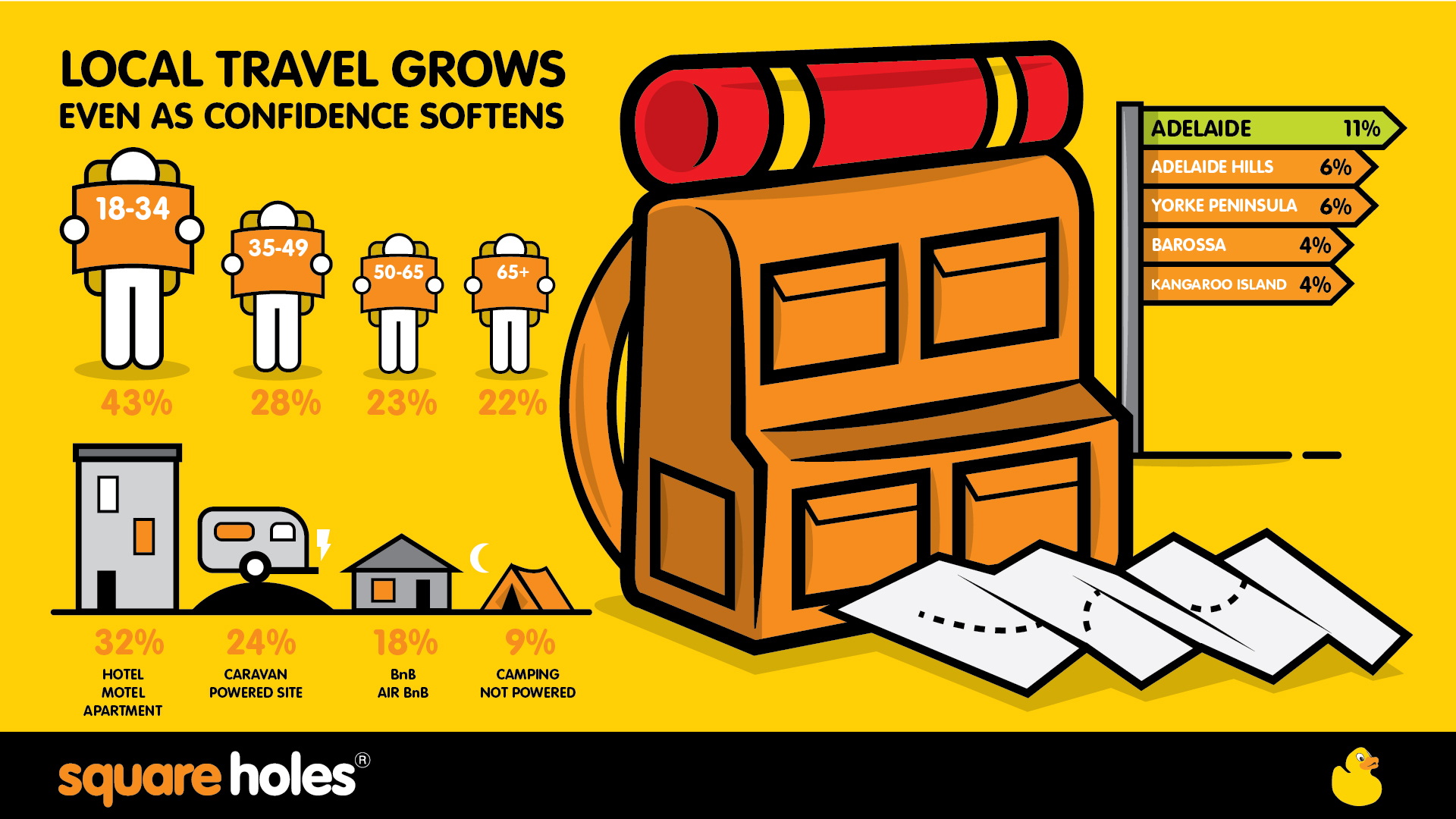 Dunstone said that his survey also found that many South Australians, particularly those aged 18-34, are more buoyant in their local travel plans.

“As we have discussed in previous mind and mood summaries, younger South Australians are currently the most financially confident, spending more and likely experiencing greater levels of confidence bias and hope that things will get better soon, so are spending with such a positive mindset,” Dunstone said.

“Whereas older age groups are feeling financially less secure of worsening conditions and a corresponding need to tighten their spending.”

The Tourism Industry Council South Australia (TiCSA) also released it’s June quarter Tourism Barometer on Friday which indicates a severe drop in tourism business activity in the first six months of the year, but a rebound in the business outlook. 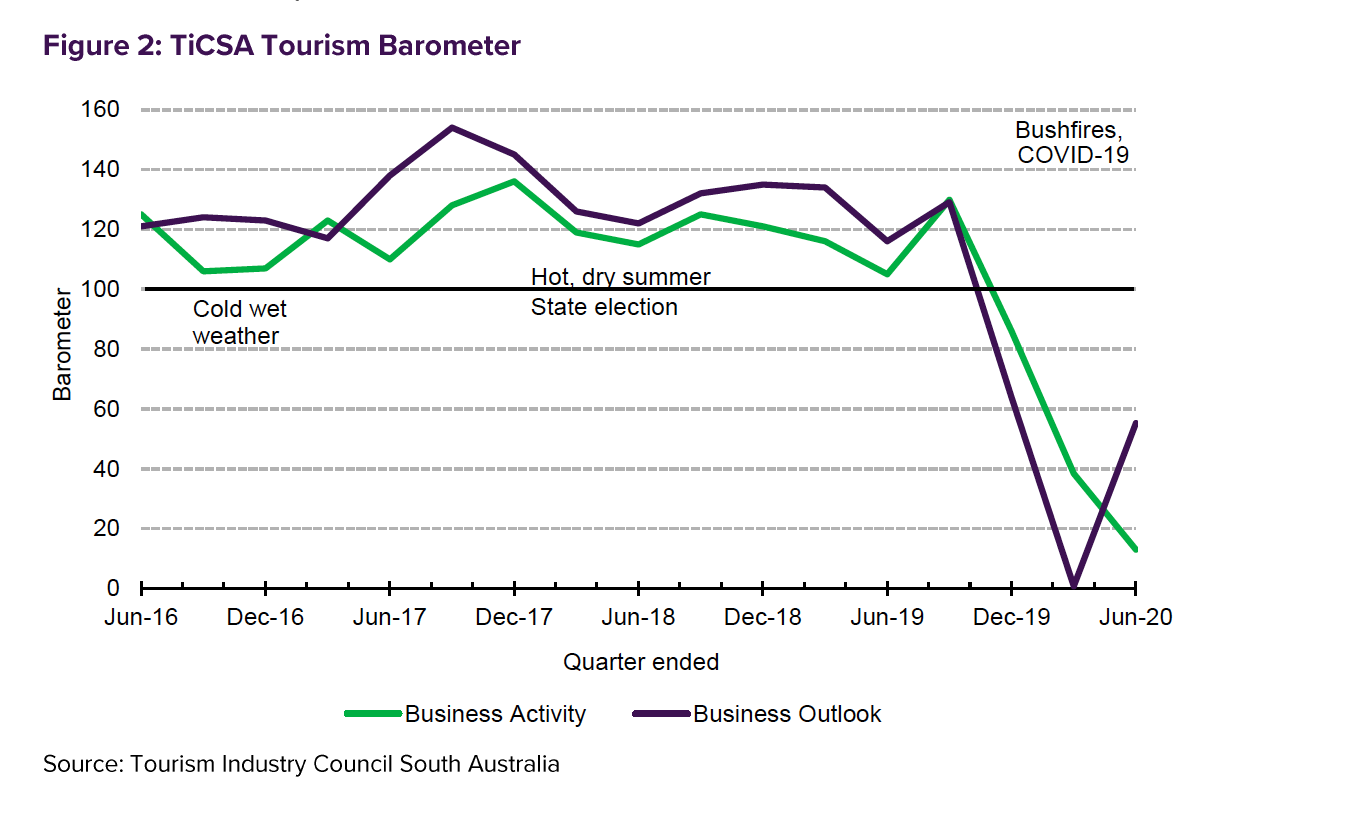 TiCSA Chief Executive Officer Shaun de Bruyn said the figures showed that the South Australian tourism industry had been hit harder in the last six months than ever before.

“The travel and social distancing restrictions associated with COVID-19 were the main contributors to poor business activity, with many businesses forced into hibernation during the April to June quarter,” de Bruyn said.

“It is pleasing to see optimism regarding future business outlook and investment starting to return, which have both risen due to the easing of state border and COVID-19 restrictions.

“The extension of JobKeeper will provide the additional time needed for tourism businesses to become more financially stable.”

Dunstone said local tourism operators could meet some of these challenges by appealing to the South Australians they found who were keen to spend more often.

“Make it easier and top of mind as an appealing option and region to visit.”

Next week’s Square Holes mind and mood summary will explore confidence and the sense of financial security.