The market as a whole has been creeping forward in recent weeks and is being buoyed by strong commodity prices.

Reporting season will get into full swing this week, which is predicted to reveal significant corporate revenue decreases and provide greater context particularly for companies that withdrew earnings guidance amid the coronavirus pandemic.

The value of South Australia’s 10 largest publicly listed companies grew by 3.9 per cent in the first five weeks of the new financial year, with some hefty gains tempered by a couple of sizeable losses.

Adelaide-based copper miner Oz Minerals has continued its strong rise up the Australian mining ranks with a 28 per cent surge in its share price between July 1 and August 5.

The growth, which boosted the company’s market cap by $1 billion to $4.55 billion, was fuelled by rising world copper and gold prices and recent increases in production at its Carrapateena and Prominent Hill mines in South Australia.

Adelaide-based metal detector manufacturer and communications company Codan is capitalising on gains made earlier in the year, adding a further 16 per cent to its value since July 1.

Boosted by booming global metal detector sales, Codan’s share price has more than doubled from a low of $3.97 on March 23 and is also well ahead of its January 1 price of $7.45 before the coronavirus pandemic began.

Agribusiness Elders is also continuing its sustained run into the new financial year as the state’s largest investment company Argo Investments claws back ground lost in the pandemic downturn. 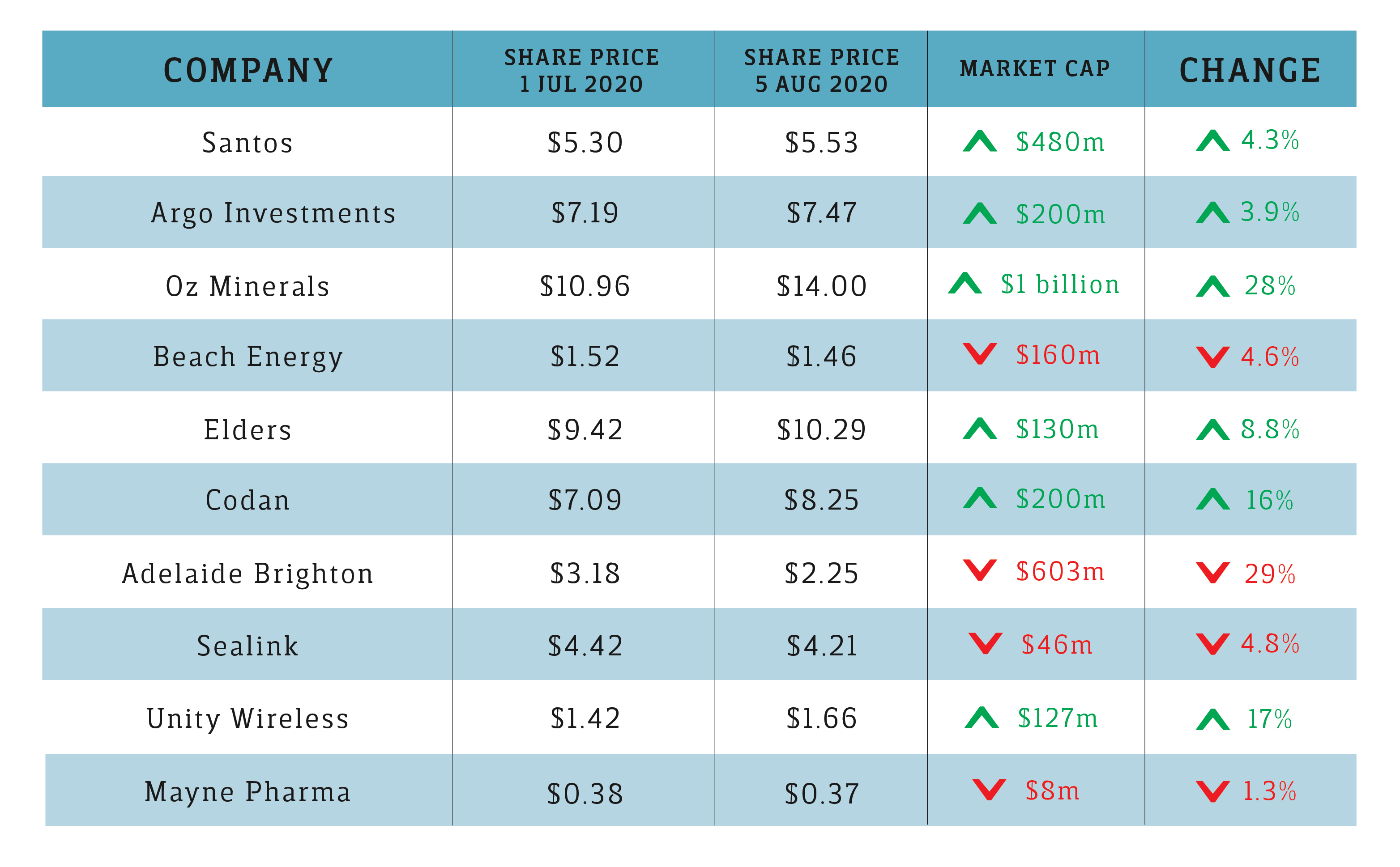 Although many are still down on their pre-COVID share price, the majority of SA’s largest 10 listed companies grew in the first five weeks of the new financial year.

Santos is gaining lost ground after a disastrous February and March resulted in its share price falling from $8.69 on January 31 to $2.75 on March 19.

Communications company Unity Wireless listed on the ASX in February 2019 and has had an impressive four months since the March crash to reach its highest ever share price last week. Its August 5 price of $1.66 a share was 24 cents up on its July 1 quote, taking its market cap to $863 million.

But it has not been a good start to the financial for other major local companies.

Adbri – formerly known as Adelaide Brighton – announced on July 3 that it had lost a lime supply contract with aluminium producer Alcoa of Australia.

The contract, which Adbri says is worth about $70 million a year, will end in June 2021.

“We are disappointed with Alcoa’s decision to displace locally manufactured product with imports from multiple sources, particularly considering our almost 50-year uninterrupted supply relationship,” Adbri CEO said in a statement to the ASX in July.

“We will work quickly to mitigate the impact on local jobs supporting our lime business and we remain committed to supplying our WA resources sector customers.”

Unlike fellow oil and gas company Santos, which is gradually recovering, Beach Energy’s share price has stagnated, ending the first five weeks of the financial year at $1.46 , falling slightly from $1.52 on July 1.

Prolonged coronavirus restrictions appear to be also hurting transport and tourism company SeaLink, which dipped almost 5 per cent from $4.42 to $4.21 for the period.