The company is continuing to advance its Aurora Tank gold project in the Woomera Prohibited Defence Area and also has copper interests on Yorke Peninsula.

The strategic review of Marmota’s uranium asset is somewhat of a return to its roots for the Adelaide-based company that began as a uranium explorer.

The Junction Dam site in South Australia’s northeast is about 50km west of Broken Hill and 15km from the Honeymoon uranium mine and tenement.

Honeymoon is one of only four permitted uranium mines in Australia but was mothballed in 2013 because it had become too costly to run.

However, its new owner Boss Resources announced in January this year it had developed technology to lower operating costs and was looking to commence production at Honeymoon within a year if prices improved. 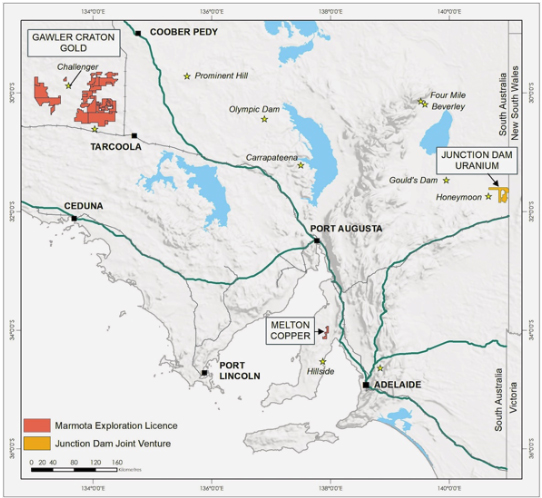 Marmota owns 100 per cent of the uranium rights at Junction Dam but has not been active on uranium since 2014, at which point it had spent A$8 million on uranium exploration.

Exploration results at Junction Dam show an Inferred resource of 5.4 million pounds with potential to increase the size of the resource with further drilling.

In a statement to the Australian Securities Exchange this morning, the company said sentiment in the uranium sector had significantly improved, and continues to improve as prices started rising significantly for the first time in many years.

It said the Marmota Board had begun a strategic review of its uranium assets in a bid to add value to shareholders.

“Prompted by the increasing uranium price and market interest, Marmota has for the first time in more than 5 years started looking again at our uranium assets, which is after all how the company originally started,” he told the ASX.

“The purpose, of course, is to unleash the value and potential of the uranium assets for the benefit of the company and its shareholders, and we are exploring a number of ways to do that, while keeping our focus firmly on our gold discovery at Aurora Tank and production pathway.”

Marmota’s shares were valued at just over 2 cents in March but have increased sharply on the back of a number of positive announcements in recent months to be trading at $0.058 at noon – their highest value since April 2013.