Seasonally adjusted retail spending fell by $140 million during the month to $27.77 billion, according to Australian Bureau of Statistics data released today, the momentum reversing sharply from a sales-driven 0.9 per cent rise in November.

South Australia recorded the worst performance, with retail sales dropping by 1.3 per cent in December.

Next worse was NSW, where businesses were particularly hit by the bushfire catastrophe, with retail sales dropping by 1.2 per cent.

“The December fall comes after a strong November, led by Black Friday sales” said Ben James of the ABS.

“There were also some effects from bushfires and associated smoke haze apparent in NSW data… specifically, food retailing and cafes, restaurants and takeaway food services were negatively impacted.”

However, quarterly retail volumes exceeded economists predictions, rising by a seasonally adjusted 0.5 per cent in the three months from October. 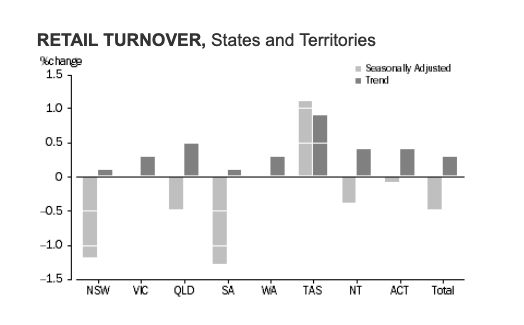 The market had tipped a 0.3 per cent improvement after a fall of 0.1 per cent in the September quarter 2019.

The rises were slightly offset by seasonally adjusted volume falls in food retailing, down 0.4 per cent.

South Australian Treasurer Rob Lucas has hailed Black Friday as a great success in South Australia, after he granted a trading hours exemption to allow shops to open until midnight on November 29.