This year’s BDO SA State Business Survey, released last night, found that nearly half of the local corporates surveyed had trouble finding and keeping workers with the appropriate skills.

“(Graduates) are coming into businesses with no skills,” Ashton Valley Fresh business development manager Joyce Ceravolo told an audience during a panel discussion at the launch of the survey last night.

Fellow panellist Matt Larwood, CEO of custom software firm Axios IT, said his business had set up an office in Sydney mainly because it had been impossible to find candidates for certain positions with the requisite skills in Adelaide.

“We had people come through who were almost there, but not where we needed them to be.

“So we set up an office in Sydney and then we recruited … three to four people because we couldn’t find local people able to successfully do the work we require them to do.”

He conceded “that was a fairly extreme thing to have to do” but said there were “some other benefits of setting up in Sydney as well (and) we need quite specific skills”.

Larwood said Axios had “waxed and waned between recruiting graduates and training them up and trying to find experienced people with four to five years under their belt”.

Over the past four years, between 45 and 59 per cent of respondents to the BDO survey agreed that the education system was not developing graduates with appropriate skills.

The survey question does not specify tertiary education or single out any particular institution, but refers to the education system generally.

That is nothing short of economic and social tragedy

In a separate speech during last night’s event, Opposition Leader Peter Malinauskas said the mismatch between graduate skills and employer needs was a “tragedy”.

“Nothing depresses me more than seeing a young man or woman who has gone through a period of education, attained what they thought were the skills that gave them the chance of getting a job and then being unable to find it,” he said.

“That is nothing short of economic and social tragedy.

“That problem is magnified and infinitely worse if there’s an employer out there who would actually like to give that person a job and that person doesn’t have the skills they need.”

He added that it was a particularly concerning during a time of high unemployment.

“We do have a structural problem with unemployment in this state, it is 7.3 per cent,” he said.

“I still believe to my core, that public education working closely with private education, particularly at the higher education level, is in need for serious reform.”

However, Australian Government-commissioned data shows that all three of South Australia’s major universities with graduate and skills outcomes at around the national average.

According to Graduate Outcomes Survey data, the proportion of graduates who were employed four months after completing their course at one of SA’s major universities, as a percentage of those who were available for employment, was about equal to the national average. 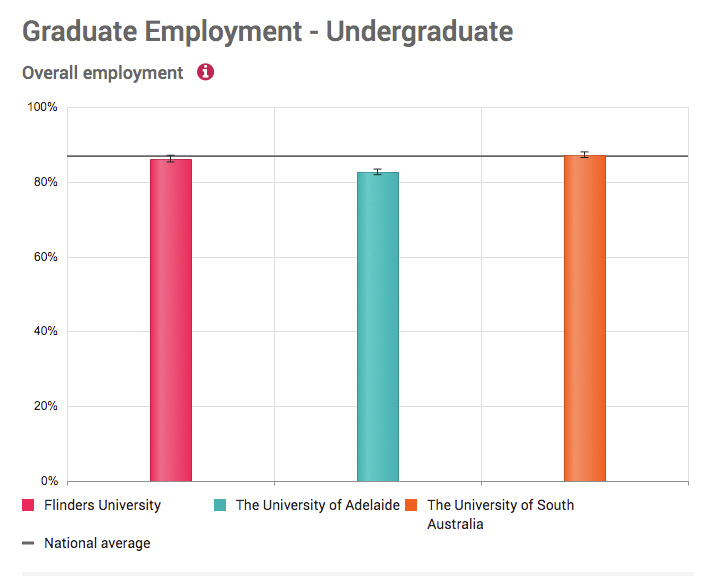 The proportion of graduates who were employed four months after completing their course (full-time, part-time or casual), as a percentage of those who were available for employment. Source: Quality Indicators for Learning and Teaching.

The number of graduates that found themselves in full-time employment after their course was better at the University of South Australia than at the other two universities.

A spokesperson for the University of South Australia said it has partnerships with more than 2500 businesses.

“These are strong and valued links and act as a framework to design all of our programs in consultation with relevant industry and professional bodies to ensure that what we are teaching is what graduates will need when they enter the workplace,” said the spokesperson. 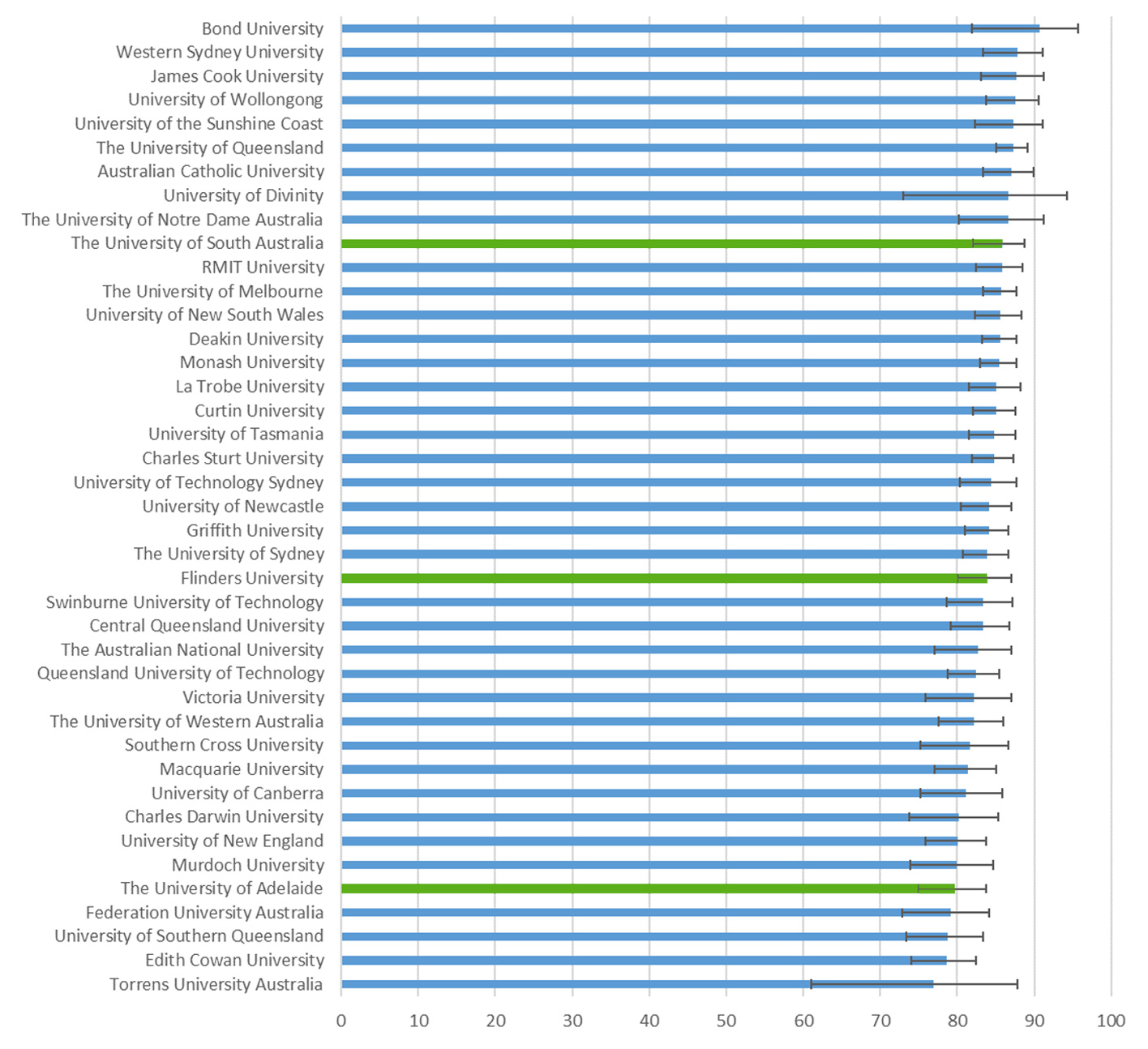 University of Adelaide Deputy Vice-Chancellor (Academic) Professor Pascale Quester told InDaily the facility was strengthening its links to the private sector by establishing an advisory board involving some of the state’s major employers, and by modifying curricula.

“Our university is doing much with industry to co-create the workforce of the future, with students being given the skills to adapt to an uncertain future and the multiple careers they may have over their lifetimes,” she said.

“This involves development of curriculum and new degrees specifically at the request of industry, as well as other direct connections between the university, our students, staff and industry, and industry placements as part of study.

“The University of Adelaide’s graduates are highly sought after by employers, and we are the only university in the state to be ranked in the top 200 in the world in the QS World Ranking for Employability.”

She added: “Through these activities and more we will continue to support new and existing industries and economic prosperity for the State.” 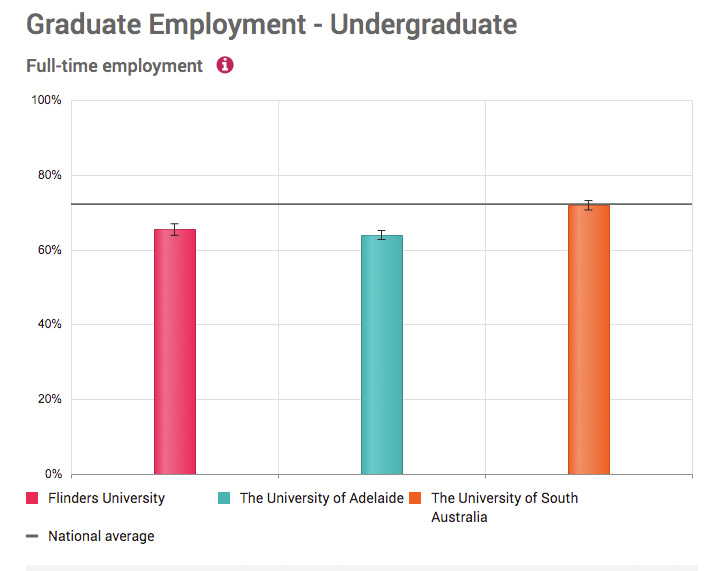 The proportion of graduates who were employed full-time four months after completing their course, as a percentage of those who were available for full-time employment. Source: Quality Indicators for Learning and Teaching.

Flinders University Deputy Vice-Chancellor (Students) Professor Clare Pollock said the university aimed to provide relevant, meaningful courses that go beyond what to think and teach how to think.

She said Flinders was the only university in Australia to offer all students in all courses the opportunity to study a innovation and enterprise course, in addition to their core studies or as a major in itself.

“Flinders is fostering enterprising graduates ready to make a difference in the workplace,” she said.

“We have a comprehensive program of work integrated learning  with more than 17,000 work placements annually, to ensure our students get relevant, job ready experience that adds to their employability and makes then an asset to their employers.

“At this time of rapid change our strong industry relationships are instrumental in ensuring our curriculum is industry relevant, and in providing students with meaningful work integrated learning to benefit their studies and future careers.

“We also offer a range of unique skills development initiatives such as our Horizon Professional Development Award, a personalised professional development program which complements students’ academic programs and equips them with skills to transition into the future work place.

“More than 3000 students are currently participating in the program.”