Announced this morning, the 295-room Hyatt Regency Adelaide Hyatt will be built on a site currently shared by the five-storey former Bank of South Australia building at 51 Pirie St, near the Adelaide Town Hall.

The former bank was built in 1927 and its frontage is local heritage-listed as a townscape, meaning sections of the building add to the character of the surrounding area. 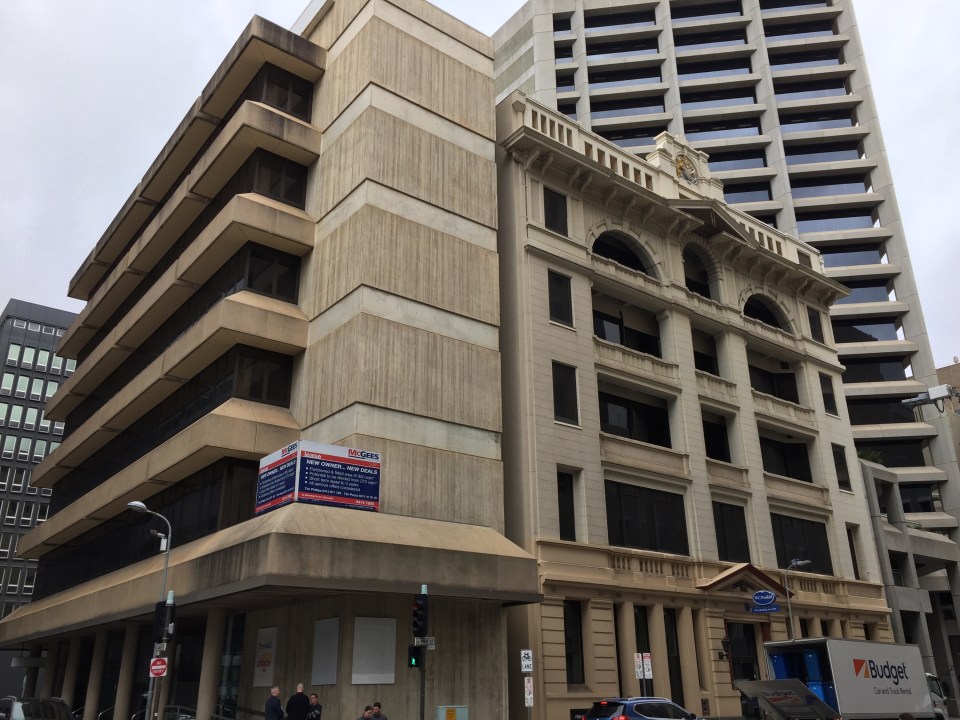 The heritage value of the old bank building facing Pirie St was considered to have been eroded by a modern addition. Photo: InDaily

Despite council opposition, SCAP granted permission in April this year for the old bank building – including its character frontage – to be demolished for the new hotel, saying changes to the site over the years had “diminished the integrity of its original heritage value”.

Construction of the hotel is expected to begin early next year and take three years, with the hotel planned to open in early 2023.

It will be developed after a management agreement between a Hyatt affiliate and CES Pirie Hotel (SA) Pty Ltd, an entity wholly owned by Chip Eng Seng Corporation Limited.

“We are grateful to work with CES Pirie Hotel on the opening of the new Hyatt Regency Adelaide and are excited to bring the Hyatt Regency brand, which has a strong legacy and following, back to this vibrant city,” Hyatt Pacific Pacific operations area vice president Robert Dawson said.

“The hotel will mark an important re-entry into Adelaide for the Hyatt Regency brand and fill a key gap in Hyatt’s domestic Australian network.”

“This is a fantastic opportunity for South Australia and we are excited to have the highly respected and internationally renowned Hyatt Regency back in Adelaide,” he said.

“Our world-class events, conferences, tourism and culinary offerings are driving visitors to South Australia in record numbers and the announcement of the new Hyatt Regency hotel is a massive show of confidence in our State as a premier destination.

“The South Australian visitor economy stands at a record $7.2 billion. We actively target high end experience seekers who are looking for quality accommodation options during their stay so this news is great timing and will further add to Adelaide’s appeal.

“More broadly, with the development will flow around 400 construction jobs and more than 200 ongoing jobs once the hotel is up and running. This is great news for our local economy and tradies and great news for tourism.”

“The investment into the city by Chip Eng Seng Group demonstrates its enormous confidence in the Adelaide market and comes at a time when there’s growing investment in the tourism sector,” she said.

But her comments follow advice from the city council to reject the demolition of the building’s heritage-listed frontage.

In a letter to SCAP in March, the council’s planning assessment manager Rebecca Rutschack warned demolition of the listed building was not consistent with development plan requirements.

“There are numerous provisions within the relevant Development Plan which call for the retention of this Local Heritage Place (Townscape),” Rutschack wrote.

“Demolition of the listed building fabric is therefore not consistent with the clear intent of the Plan.”

Deputy Lord Mayor Houssam Abiad said this morning he supported the development going ahead, but expressed disappointment at the decision to demolish the existing building’s frontage.

“It’s going to be a great outcome, but we shouldn’t have to lose a heritage façade,” he said.

“There’s been a lot of development in the city and they’ve been very sympathetic to heritage and they’ve managed to make it work.”

Councillor Anne Moran, who sits on the Council’s Assessment Panel, described the looming demolition as “a great shame”.

“At the moment the media is bemoaning the fact that there’s so many buildings unlisted and I think this underlines that we need to protect our heritage façades as well as our heritage buildings,” she said.

“The old saying that heritage buildings can’t be modernised or repurposed isn’t true anymore, we’ve seen perfect examples where the streetscape can be kept.

“There’s really no excuse for doing what they’re doing.”

In a statement, the council’s associate director of planning, design and development Shanti Ditter said the council was unable to challenge SCAP’s decision to give planning consent to the hotel development.

“Notwithstanding this, we are excited about this addition to the city that will provide a significant boost to the local economy,” she said.