Barley variety WI4896 was bred by the University of Adelaide at its Waite Institute and was named Leabrook after passing Stage 1 malt accreditation in March. It will become an accredited malting variety in March 2020 if it passes Stage 2.

Leabrook barley is closely related to Compass, which was also bred by the University of Adelaide and is currently used by Coopers as its standard malt across its range.

Early trials have found Leabrook to be higher yielding and have higher malt extract than other varieties, offering benefits for both growers and brewers.

Coopers malted Leabrook barley last year and made a test batch of beer as part of the accreditation process.

It plans to malt two more batches at its new 54,000-tonne malting facility  (pictured below) alongside its brewery in the coming months. 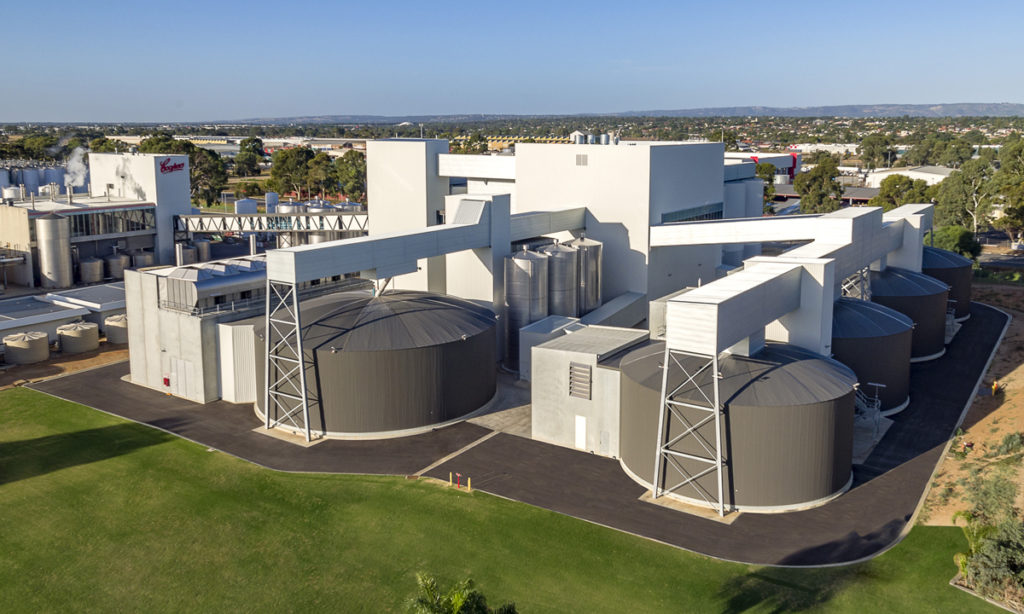 Coopers’ maltings manager Dr Doug Stewart said if all went well with testing and Stage 2 accreditation, it was likely that Leabrook would eventually replace Compass as the barley of choice at the brewery in a staged transition as the variety was adopted by more growers.

“There were no problems at all so we’re very enthusiastic that it will be a good replacement for Compass.

“The variety Compass is very much in line with the domestic brewing industry so I think the new variety will find its way into a number of different domestic beers, including some craft beers.

“It will certainly keep that Compass type of barley around for longer, which is a style of barley and malt that we enjoy.”

Coopers’famous ales were first brewed at Thomas Coopers’ home in 1862 – almost two decades before the commercial brewery opened at Leabrook in Adelaide’s eastern suburbs in 1881. The family-owned brewery relocated from Leabrook to the current site at Regency Park in 2001.

The Leabrook site has since been demolished and replaced with a high-end retirement village.

Dr Stewart said malting of Leabrook grain harvested in 2018 would start after its dormancy was broken in late May or early June.

“Then we’ll assess it for all of its malt characteristics and we will probably make a brew with it as well just to see how it goes through the brewery,” he said.

“What we generally do is a single brew and we’ll bottle that off for assessment with the full taste panel to make sure it’s true to type and then we’ll blend the rest off.”

The University of Adelaide’s barley breeding program at the Waite Institute ended in June 2017, meaning that WI4896 could be the last commercial barley variety officially named by the university.

The University of Adelaide has traditionally used maritime terms such as clipper, schooner, keel and fathom when naming its barleys, which Dr Stewart said made the break from tradition to use the Leabrook name all the more special.

“Coopers has been involved with the breeding program at the University of Adelaide for many years and we have ongoing research projects with them as well, so it’s a lovely touch that they’ve agreed to name it after our original brewery site,” he said.

The variety is being bulked up this season through Seednet Partners growers at eight sites – three in South Australia, two in Queensland, two in New South Wales and one in Western Australia.

About 5 tonnes of seed has gone out and seeding has begun in some areas. More than 400 hectares will be planted and about 1000 tonnes of seed likely to be kept for the commercial launch in 2020.

Seednet Partners general manager Simon Crane said Leabrook would be grown alongside other barley varieties such as Compass, Spartacus and La Trobe for comparison purposes.

He said it was a tall and vigorous plant type with a 2-5 per cent yield advantage on other Seednet Partners malting varieties, which include Commander, Compass and Scope. Leabrook has also been shown to have a slightly higher malt extract than other varieties, Crane said.

“Yield is the main reason but we’re hoping that on the malt side it’s got something to offer so end users are asking about it as well as growers who are keen to grow it,” he said.

“It’s also in the national variety trial system so there are a lot of trial results but this year will be the first larger-scale evaluation and demonstration of the variety.

“If it follows the results that we’ve seen from the trials then it will be up there for yield and if it makes malting then the maltsters will probably be looking to get parcels of it to test with their customers and hopefully it will become a good commercial variety.”

This article was first published on The Lead South Australia.