Few insiders doubt that Christopher Pyne’s long-time confidant and heir apparent James Stevens will win the contest – if there even is a contest.

The outgoing member, who held the seat for 26 years, maintained a vice-like grip on the sub-branch votes that guaranteed his preselection, but Stevens – as current Federal Electorate Convention president and Pyne’s perennial campaign manager – is as ensconced in the politics of Sturt as anyone.

The eastern suburban seat isn’t exactly a fortress for the Liberals – at various times during his quarter of a century in parliament Pyne has weathered electoral storms that could have washed away lesser operators – but it is a stronghold for the moderate faction.

It is the zone in which factional heavyweights have forged their careers, including Simon Birmingham (who will now formally replace Pyne as the faction’s most senior federal incumbent), Vickie Chapman, Vincent Tarzia, John Gardner, David Pisoni and Premier Steven Marshall – to whom Stevens yesterday tendered his resignation as his Chief of Staff.

I have just met with the Premier to resign as his Chief of Staff. It's been an amazing 6 years for me in the role and I couldn't have been more proud and honoured to serve @marshall_steven and the Liberal Government. pic.twitter.com/zBkRhpsy7u

Stevens is seen, like Pyne, as adept at political strategy – it was he who oversaw the state party’s adoption of electoral data mining software i360 that gave them a campaigning edge last year – which is why few in the party doubt that there has been little left to chance in his ascension.

But on the eve of a preselection contest that has an air of the inevitable about it, there has already been considerable public bloodletting.

Even among moderates, the stage-managed process – which also included the ascension of longtime staffer Courtney Morcombe as Marshall’s new CoS –  has gone over as somewhat glib.

Morcombe, who has herself been mooted as a future candidate, is married to Birmingham, reinforcing the sense of moderate hegemony in the state party.

Conservative Liberal Tony Pasin has already publicly called for the moderate faction to put forward a woman to represent the party in Sturt, even naming several prospective candidates.

Thus far, though, the only other prospective candidate who has publicly declared their hand is a man – former party vice-president – and regular InDaily legal columnist – Morry Bailes.

“I’ve been in the electorate for 20 years and it’s not often that the federal seat comes up,” he told InDaily today.

“It’s good to have a contest with as much choice as possible – that’s good for democracy overall… and unsolicited by me I’ve had a surprising amount of support.

“So let’s say I’m thinking about it.”

Bailes describes himself as a “centrist” but is regarded as sitting on the conservative wing of the party. Another mooted candidate, moderate Burnside councilor Henry Davis, today ruled himself out, saying: “At this stage I don’t have any intention of running.”

Oddly though, Marshall – who rarely involves himself publicly in preselection matters – this morning publicly endorsed his ex-Chief Of Staff, telling ABC Radio Adelaide Stevens is a “highly intelligent guy”.

“He’s probably the longest serving Chief of Staff to a political leader in the country, so he’s all about loyalty,” he said, pointing out that his sidekick had similarly “worked in the private sector before being involved in politics”.

That stint was a brief interlude with Michell Wool, where among other things he demonstrated his capacity to use the word ‘garment’ more times in three minutes than anyone else in human history:

“He would be a fantastic representative if he’s preselected,” enthused Marshall, declaring as a member of the electoral college he would “absolutely” be voting for him.

However, when asked about the dearth of women in the Liberal Party, he returned to his usual script, bizarrely saying “I try not to interfere in federal matters… we’ll let the federal politicians look after their federal preselections”.

It’s understood the Premier’s intervention in the Sturt contest has already triggered angry responses from several in the conservative faction, particularly given he has weighed in previously on the need for more women candidates.

“You’ve got to walk the walk at some point,” one told InDaily.

“We don’t accept that there are not competent, strong, capable women in the Liberal Party – because there are… and they shouldn’t be dissuaded from running by factional leaders.”

Others have pointed out that the moderates also preselected a male, policeman Shaun Osborne, for Adelaide, while also controlling the party’s Women’s Council, which has 12 delegates on the Liberal State Council.

“It’s fascinating that the moderates are making all this noise about getting more women, and I suspect they’re not going to give a yelp about trying to promote a woman in this seat,” said one insider who contacted InDaily.

Moderate powerbroker Anne Ruston, though, said that ultimately “the decision about who is the next [candidate] for Sturt is absolutely the right of the members of the Party in Sturt to decide”.

There are around 600 of those, with a proven penchant for backing Pyne.

Stevens, who won’t comment during the preselection process, will be the obvious successor to those who were loyal to the outgoing MP – he was even described on social media today by conservative commentator Judith Sloan as “a Pyne clone”. 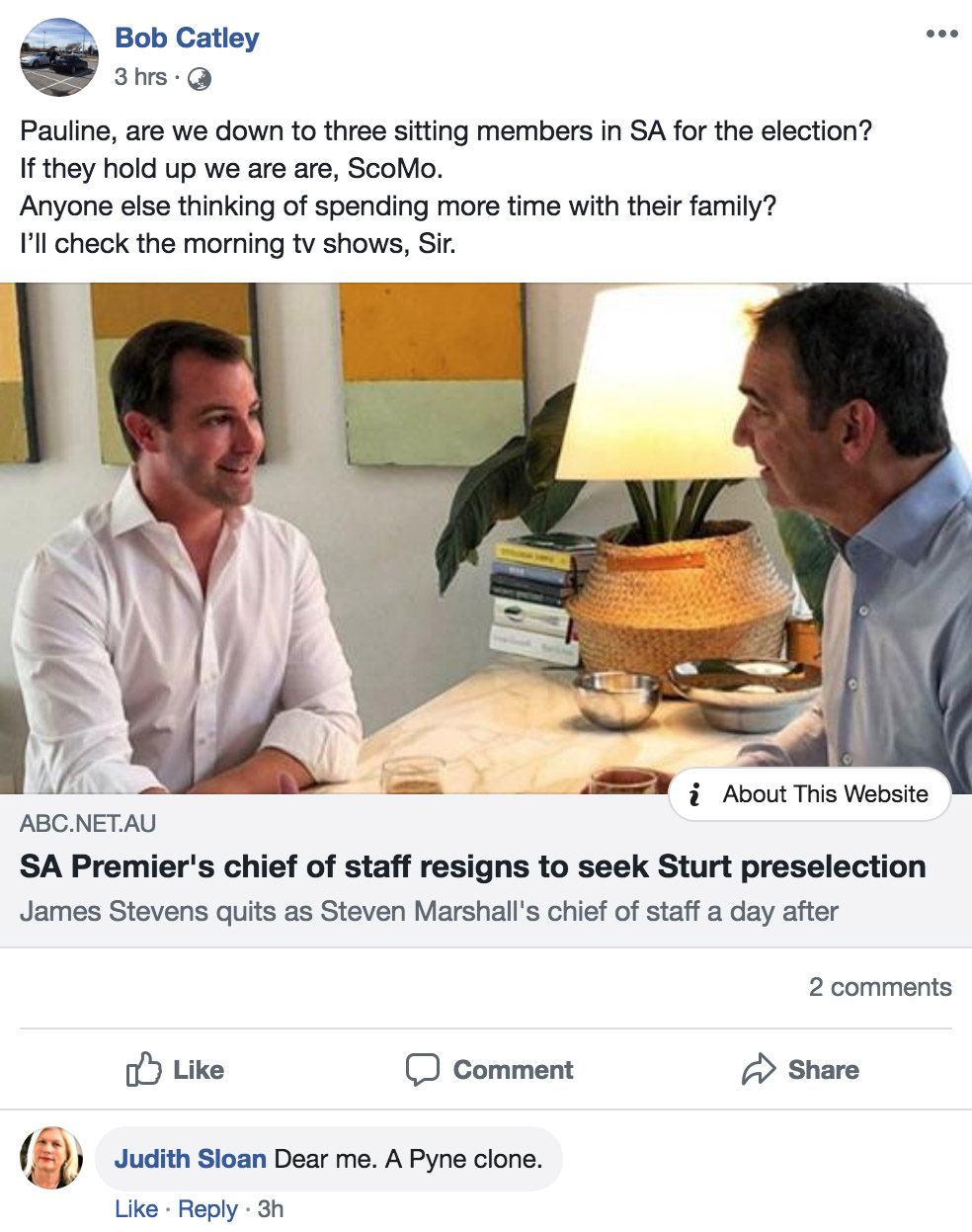 But not everyone in the party is convinced, with one noting a key point of difference from the faction’s young elder statesman: “Pyne holds us together – but I don’t think James will.”