People need unbiased and useful information if they are to form good judgements on what is happening. Otherwise, they are at the mercy of spin-doctors of one sort or another.

It is only four pages long.

More than half the space is taken up by charts (and one table). Nearly all the charts show comparisons with the Australian economy as a whole.

This publication is one of the best summaries going around of what is really happening in the South Australian economy. It costs nothing and readers can subscribe by email.

Take employment, for example. The chart tells you everything you need to know. Over the past three years employment growth in South Australia has flatlined, whereas in Australia as a whole the growth figure is 5 per cent. 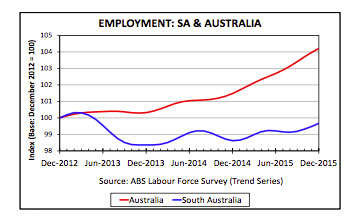 Even that does not tell the whole story, because it is only part-time employment that has grown.

Full time employment is 2 per cent less than it was three years ago (this is also shown in a chart). 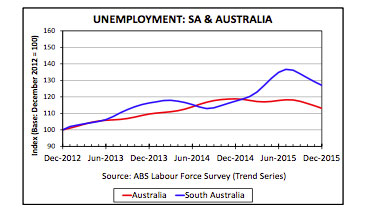 Comparisons in terms of youth unemployment rates are particularly distressing for South Australians.

The ANZ’s Job Advertisement Series (newspapers only) shows a declining trend both for Australia and South Australia (as job advertising shifts on-line), but the downward trend is much greater for South Australia since March 2014. 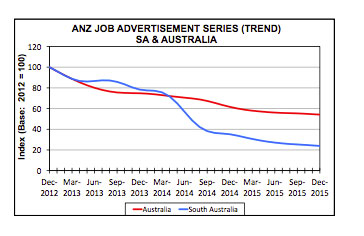 Two charts depict what has happened to production in Australia and South Australia since September 1995. 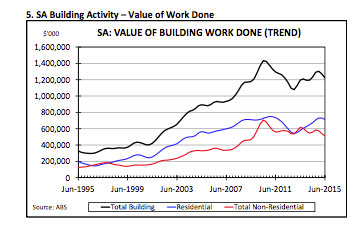 Finally, there is a chart of the engine of growth in all economies – Actual Private New Capital Expenditure.

This clearly shows that the upward trend in private sector investment in Australia as a whole accelerated from about 2011, reached a peak and has now fallen back to 2011 levels.

By contrast, growth in South Australia’s private sector investment decelerated from the middle of 2007, and is presently less than it was eight years ago. 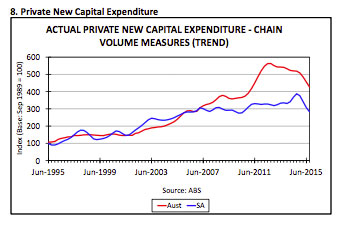 Richard Blandy is an Adjunct Professor in the Business School at the University of South Australia.