On the anniversary of Liberal Premier Tom Playford’s defeat 50 years ago, political analyst Haydon Manning argues the SA Liberals’ lack of success since then is down to bad luck and geography.

A host of factors contribute to the recent absence of the Liberals ‘in government’ in South Australia.

Tom Richardson’s Grim anniversary for Australia’s least successful party presents the popular view that this is all explained by the local Liberals’ penchant for infighting, notably the Chapman–Evans family feuding.

Boiling it down, the Liberals were politically unlucky at a crucial point in time. They faced one of the most formidable politicians in Mike Rann and Labor during the past three elections campaigned brilliantly, especially in marginal seats.

But underpinning the SA Liberals’ fate is the adverse electoral geography that, while not biased in my view, is clearly skewed in Labor’s favour. The salient factor for this “grim anniversary” is not internal divisions but a consequence of former Liberal Premier Steele Hall’s virtuous move in the late 1960s to introduce one vote, one value.

Consider election results in SA and compare them to other states. Take a hypothetical route and apply the SA Liberals’ primary and two-party-preferred vote in other states and you will find plenty of Liberal governments elected.

The facts speak for themselves, causing me to grimace when I read Professor Macintyre’s pondering that “there’s no argument that the natural party of government has been Labor”. Apart from not grasping ethereal notions such as “natural party of government”, I cannot see, at least from the perspective of how South Australian voters viewed the electoral equation, much evidence of Labor’s domination.

This graph tracking voting since the mid 1960s shows that the Liberals often beat Labor but did not form government. The reason lies with the adverse electoral geography whereby much of the Liberal vote is locked up , so to speak, in very safe rural and regional seats. 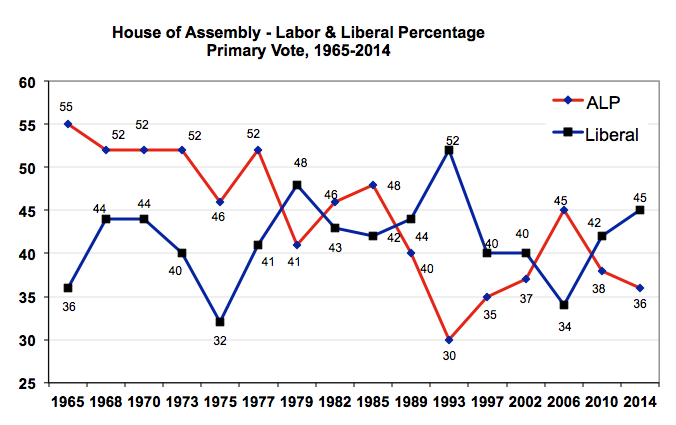 The Labor Party may claim “natural party of government” status if the evidence pointed to Labor consistently trouncing the Liberals, but that is simply not the case.

Over the past 50 years since Playford lost government, Labor leads the Liberals by a whisker, 44% to 43%, if you take into account the average primary vote. On the measure of years in office, the SA Liberals have the wooden spoon compared with the interstate colleagues but that is an unfair measure of a political party that so consistently beats its opponents on votes counted.

Macintyre argues the Liberals in Opposition render a “pretty lamentable performance”, but this view can be questioned by the fact that on three occasions, from Opposition, the Liberals comfortably beat Labor on the two party preferred vote – in 1989, 2010 and 2014.

Ponder for a moment how the Liberals fortunes may have transpired if, on that other occasion when they out-polled Labor, events had turned out a little differently.

Mike Rann said he was all but “cactus” when negotiating with the independents after the state election of 2002 resulted in a hung parliament. But his last minute offer of the House of Assembly Speakership wooed former Liberal, Peter Lewis, to turn his back on a conservative electorate and support Labore.

Rann punted on an appeal to self-interest, namely prestige and remuneration package that goes with being the Speaker. Lewis grabbed this with relish and cut a deal with Labor. The Liberals gasped, as any party would when a former member backs the other side.

Like him or not, Rann was a formidable modern politician. In government he wedged the Liberals on the political right with his law and order crusade and cleverly wooed other conservatives to join his government.

No Liberal Opposition leader anywhere in the nation would have laid a glove on him between 2002 and 2009.

In weighing up the last 50 years it is far too narrow to only consider the Liberals in Opposition. Premiers Brown and Olsen faced the worst of times when dealing with the debacle that was the collapse of the State Bank. We tend to forget today how grim those days were in the 1990s and what a hellish political wicket it was for the Liberal Party in government.

To be sure, it was folly to oust Dean Brown, and Olsen paid dearly at the 1997 election. However, with the privatisation of ETSA Olsen introduced, arguably, the most important reform in the last 50 years. It was a game breaker for SA and, while there were scant votes in it for Olsen’s government, it delivered the cash to pay off the State Bank debt.

Of course the grand irony here is that Rann and Foley were the chief beneficiaries of ETSA privatisation. They were able to tout the return of the ‘Holy- Grail’ – the Triple A credit rating – as an example of Labor’s responsible economic management.

Entering office in 2002 meant that Rann’s government enjoyed the manna from heaven years that was the beginning of the GST “rivers of gold” and the talk of the Olympic Dam expansion.

Had Lewis backed Rob Kerin’s Liberals back in 2002, I have little doubt that the Liberals would have enjoyed the good economic times of the mid 2000s and won in a canter in 2006, as Labor did with its ‘Rann Gets Results’ campaign.

Yes, we would be writing a different story if a little more political luck had fallen the Libs way.

I agree the Liberals are often their own worst enemy. Vickie Chapman wrecked Isobel Redmond’s chances in 2010, and they were pretty good seven days out from polling day, with ill-disciplined reflections on her leadership ambition. Marshall’s inexperience showed up to voters the longer the campaign ran in 2014. But he still managed to render the third highest primary and two party preferred vote for his party in 50 years – and, one might note, a higher primary vote than anything Labor has managed over the past two decades.

So the political picture is not as grim as portrayed. There have been very close election results over the second half of the 50 years, and with a little more luck running the Liberals’ way we would not be entertaining a ‘grim anniversary’.

Haydon Manning lectures in the School of Social and Policy Studies at Flinders University.