Day three of the 2014 State Election campaign started with a debate and will end with another one.

Major party leaders Jay Weatherill and Steven Marshall went head-to-head in the 891ABC studios at 8.30 am and their official leaders’ debate is live from ABC studios tonight at 7.30pm (InDaily’s Liam Mannix will be live-blogging from the studio floor).

This morning’s half-hour effort on radio turned out to be a teaser for the big one tonight with a focus on the recent $5.5 million employment deal with IT giant HP and which party had better policy costings.

Personally, we’d give a gold medal to any party that can get within cooee of the next four year’s actual financial outcomes. Our resident office mouse has a better record in the footy tips.

Candidate’s posters went up late on Friday and if their proliferation is any guide the Liberal Party is miles ahead.

In the close-call seat of Adelaide where Labor is fielding its star recruit David O’Loughlin, incumbent Liberal Rachel Sanderson has 10 posters for every one of O’Loughlin’s.

It’s a similar look in Norwood where Liberal leader Marshall is expected to retain his seat.

The posters suggest Labor isn’t keen on advertising its corporate brand of SA Labor, opting to promote the candidate with a small ALP logo on the top right hand side.

Labor’s also rolling out posters that push the slogan “Let’s keep building  South Australia”; they’re hard to read and difficult to associate with any particular party or candidate.

Down in Croydon, meanwhile, political veteran Michael Atkinson is sticking with his personal view that campaign posters only annoy people and there’s barely a “Vote for Mick” sign to be seen.

With a 14 per cent margin, it’s unlikely to make much of a difference.

Nick Xenophon’s mug appears on posters – and he’s not even a candidate. The powerful brand of Mr X is being used to support a range of Upper and lower House candidates. 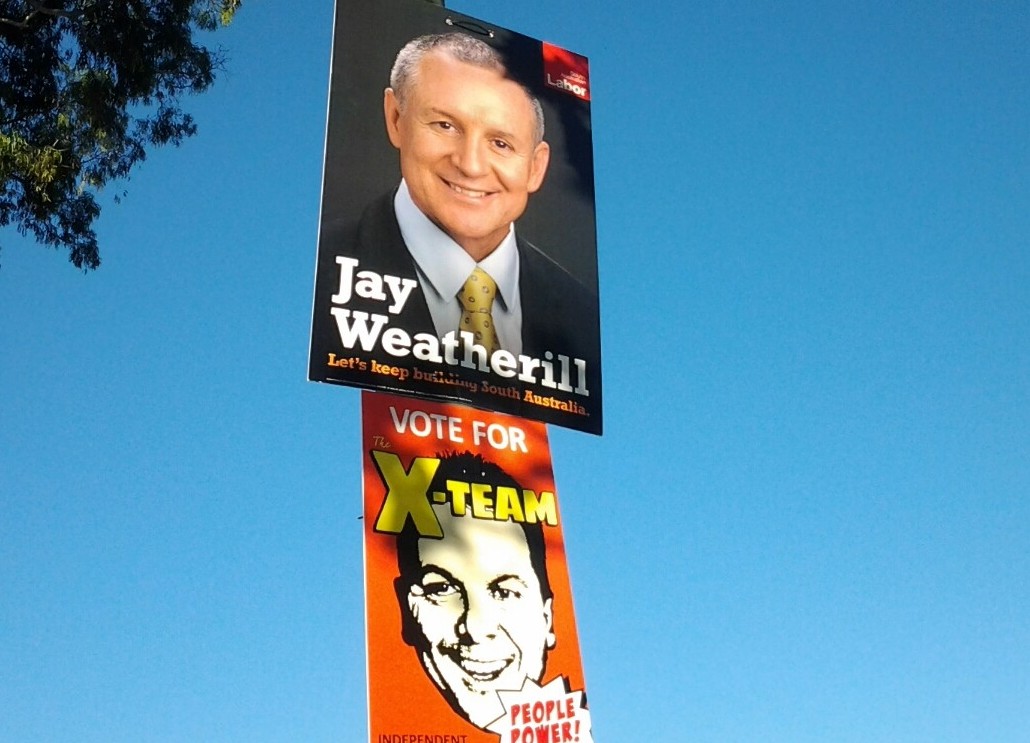 The 28-day official campaign started Saturday with a visit to the Governor where the relevant paperwork was signed.

The substance of it was ramped up on Sunday when Federal Opposition Leader Bill Shorten flew in to introduce Jay Weatherill at the party’s official campaign launch at Adelaide Oval’s main function area.

Again, the Labor brand wasn’t as evident as the campaign brand – Jay4SA.

It was an earlier-than-expected official launch.

Labor, it seems, has decided to get campaign policies and strategy out there as soon as possible as it seeks to reel back the gap evident in recent published polls (go here for Labor’s policy documents).

Absent from the official launch on Sunday was former Premier Mike Rann, now ensconced in his diplomatic post in London.

Four years ago Rann launched the 2010 campaign with a central promise of creating 100,000 jobs.

Later, at a press conference, Rann was asked how the 100,000 jobs would be measured. “We will be held accountable because at the next election you will be able to judge whether we are on track to reach that target,” he said.

One of the first jobs to go, however, was Rann’s when he was tapped on the shoulder by party powerbrokers in July 2011.

His opponent in the 2010 election, Isobel Redmond, had a similar fate, walking out of the leadership in December 2012 after an initial leadership challenge and a looming second challenge.

The long journey from poll to poll has taken its toll.

The first claimed a campaign donation made by a candidate has been referred to ICAC. Even if it was true, we cannot report it, along with several other ICAC yarns doing the rounds.

The second envelope contained a press clipping about a Liberal candidate, with a typewritten message that the Liberals want to keep this “under wraps”. Problem is, it’s already been published hasn’t it?