The Child and Young Person’s Visitor amendment bill, introduced by One Nation MLC Sarah Game last month, is likely to go a vote once parliament resumes in September.

If passed, the bill would amend the Children and Young People (Safety) Act to require the government to provide the state’s Child and Young Person’s Visitor with “the staff and other resources that (they) reasonably need for exercising (their) functions”.

The position was created in 2017 in response to a recommendation by Royal Commissioner Margaret Nyland, who after a two-year child protection inquiry found there needed to be a dedicated advocate for children living in residential care.

The Marshall Government in 2018 funded former Guardian for Children Penny Wright to conduct a two-year trial, but the money dried up at the end of 2019.

The Malinauskas Government announced in April that it would spend $450,000 each year to reinstate the role, but Wright claimed a business case commissioned by her office in 2020 found she needed a minimum of $1.637 million each year to do the job properly.

She said the amount budgeted by the Malinauskas Government meant her office “probably won’t be able to visit every facility in a year” and there was a risk that some concerns might go unnoticed.

Game said her amendment bill, if passed, would require the government to review and increase the amount it funds Wright’s successor Shona Reid to carry out the Child and Young Person’s Visitor role.

We need something to happen as a result of his death

She said she was prompted to introduce the bill after reading about the death of 13-year-old Zhane Chilcott, who took his own life in 2016 while he was living in a residential care unit at Morphett Vale in Adelaide’s south.

A coronial inquest heard there were critical failures in the level of support the Department for Child Protection – then known as Families SA – provided to Chilcott, with the boy living in about 18 different placements before his death.

The inquest was told that between 2005 and 2011, Families SA conducted only six home visits to check on his care.

“I’ve just been beyond distressed about it actually – to feel how lonely and anguished he was,” Game told InDaily.

“It seems as though they (the department) completely underestimated how desperate he was.

“We need something to happen as a result of his death.

“We don’t want any other children to feel that isolated and alone in residential care. We want them to have proper communication with these advocates on a regular basis so we’ve got that other check.”

In a statement, Reid told InDaily that it was important that all legislation establishing independent oversight roles contained a funding commitment clause.

“It is unfortunate that this was missed in the initial drafting of the Children and Young People (Safety) Act 2017, and it’s an omission that I intend to raise as part of the upcoming review of that legislation,” she said.

In a tabled reply in parliament, Hildyard did not respond directly to the question, but said the government’s investment was “complemented by other commitments to child protection”.

Hildyard told InDaily in April that the government landed on the $450,000 per year sum after considering “all sorts of deep processes in terms of costing out our policies”.

A state government spokesperson told InDaily this morning that Labor was considering its position on Game’s amendment bill.

“The Malinauskas Labor Government reinstated funding of $1.87 million over the next four years to the Child and Young Person’s Visitor as part of the June State Budget – funding that was cut by the previous Liberal Government,” the spokesperson said.

“We look forward to working with the newly appointed Guardian for Children and Young People, Shona Reid, and her office on the incredibly important work of the Child and Young Person’s Visitor.” 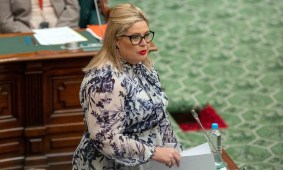 An Opposition spokesperson said Game’s amendment bill would be considered at its joint party meeting “in due course”.

Residential care is a living arrangement whereby children under the guardianship of the Child Protection Department live in group homes and are cared for by rostered carers.

Latest data from the department shows on May 31, 638 children were living in residential care, which represented 13 .5 per cent of the total number of children in care that day.

Advocates argue children are better-off living in foster or kinship care, where they can grow up in a family-based environment.