Australian Bureau of Statistics data released this morning show Australia’s Consumer Price Index (CPI) increased by 6.1 per cent in the 12 months to the end of June, a two-decade high.

However, Adelaide’s June quarter increase of 2.1 per cent was the equal highest quarterly in the nation with Brisbane and Darwin.

For the quarter alone in Adelaide, food (2.6 per cent), clothing and footwear (4.7 per cent), housing (2.7 per cent) and transport (2.8 per cent) were the main inflationary drivers.

The housing category was impacted most by a 6 per cent quarterly price rise in new home prices, transport by a 4.9 per cent spike in petrol prices and food by a 7.3 per cent increase in vegetable prices.

Nationally, inflation is now running at the fastest rate since June 2001.

The 6.1 per cent increase in the past year is up from 5.1 per cent at the end of March.

ABS head of price statistics Michelle Marquardt said fuel prices and the cost of building houses were the largest inflation drivers for the quarter.

“The CPI’s automotive fuel series reached a record level for the fourth consecutive quarter,” she said. 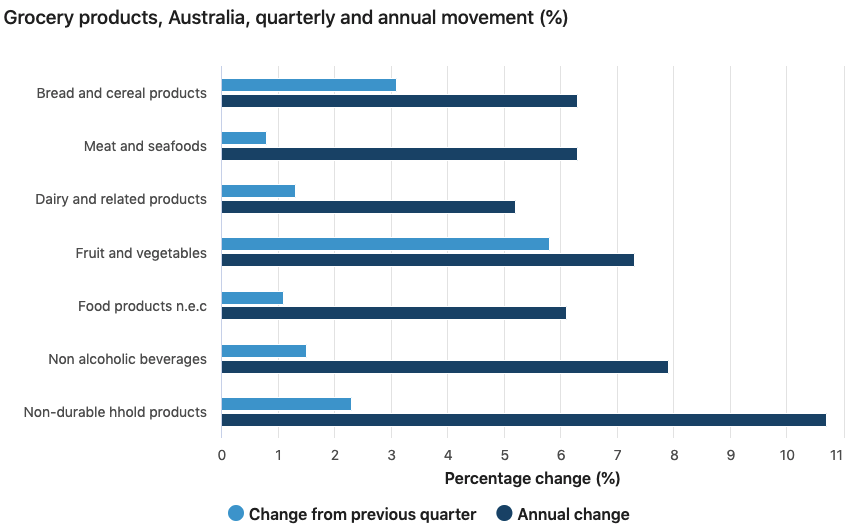 “Fuel prices rose strongly over May and June, following a fall in April due to the fuel excise cut.

This morning’s data shows price hikes across the economy gathering pace ahead of an expected peak of 7 per cent later this year.

The Australian Chamber of Commerce and Industry described Wednesday’s figures as “alarming”.

The inflation figures come less than a week out from the Reserve Bank’s next board meeting where it is expected to increase interest rates for a fourth successive month.

The RBA has already lifted the cash rate target from 0.1 per cent to 1.35 per cent since May.

The market consensus has been for a 50-basis point rise, which would take the cash rate to 1.85 per cent.

ANZ and Westpac both predict the cash rate could reach 3.35 per cent in the next six months.

–  With The New Daily and AAP