The SA Health hospital dashboard showed there were no inpatient beds available across Adelaide hospitals this morning.

The metropolitan hospital system can fit 2959 patients, but at 11am, the dashboard showed there were 2905 inpatients admitted and 106 patients who were stuck in emergency departments waiting for a bed.

Meanwhile, at 11.30, a “code white” was declared for the Lyell McEwin and Queen Elizabeth Hospitals, meaning that those emergency departments had all of their treatment rooms being used. 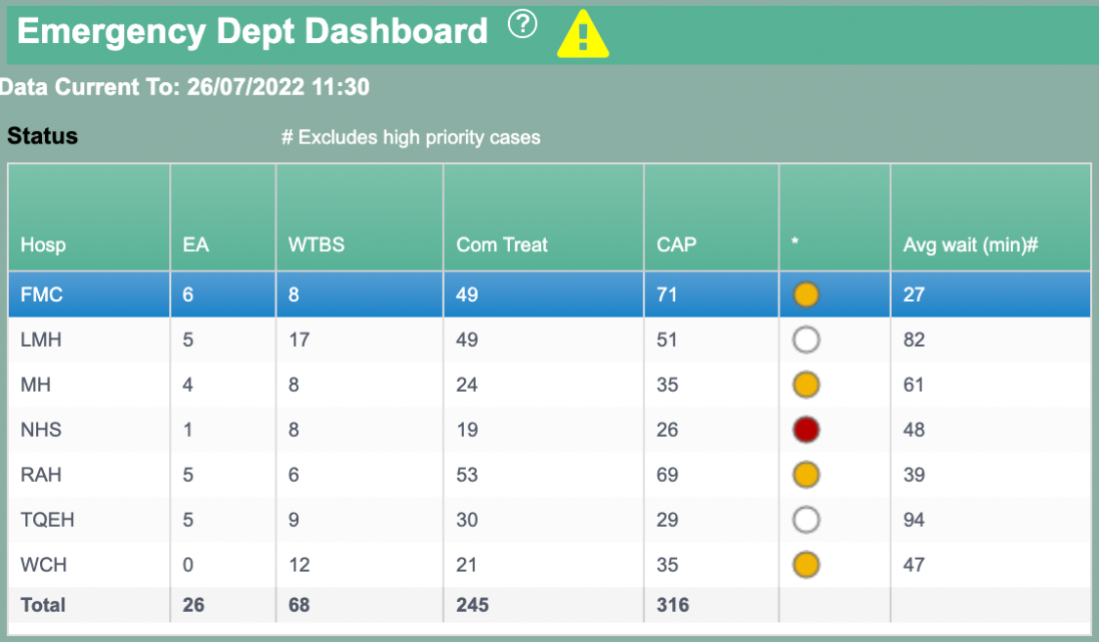 SA Salaried Medical Officers Association chief industrial officer Bernadette Mulholland told InDaily hospitals were bracing to be “regularly in white” for at least the next six to eight weeks due to a lack of beds and staff.

She said the hospital workers were already “exhausted”, with staff feeling anxious about the oncoming demand.

“For the next at least six to eight weeks with COVID and with flu we’re going to see our hospitals regularly in white on our dashboards because it’s just insufficiency of beds and insufficiency of staff,” she said.

“It’s unrelenting the demand on the hospital system, but we don’t have the capacity in our workforce.

“I think this is going to be a really tough time for everyone.”

Her comments were echoed by SA Ambulance Employees Association general secretary Leah Watkins, who said SA Health modelling showed the current level of hospital demand would be sustained for about next two months.

“It’s going to be a more prolonged peak than previous peaks,” Watkins said.

“Almost every day of every week for the last few weeks has been OPSTAT (operational status) white, which means the Ambulance Service is not meeting its emergency response times.

“I’ve heard of multiple crews being ramped for eight hours with the one patient.

“At Flinders (Medical Centre) last week there were five or six crews that were all ramped for eight hours with their patients.”

Modelling by the University of Adelaide shows South Australia is likely to hit a peak of about 400 COVID hospitalisations sometime this week.

There are currently 379 people with COVID-19 in hospital – down from 384 yesterday – including seven people in intensive care.

A woman in her 90s and two men in their 80s died after testing COVID-positive.

Asked to confirm whether hospitals were predicted to remain operating at the current level of demand for at least the next two months, Health Minister Chris Picton said: “It’s probably going to be a lot longer”.

“We’ve had regular code whites called in our hospitals for the last three years, so it’s probably going to be a lot longer than a few weeks given that this has been happening for years and years in our health system at the moment,” he said.

“We have plans… to open 550 additional beds – most of those we have to build, (and) of course, we have to staff with additional nurses and staff that we’re hiring as well.

“But, in terms of the modelling specifically for COVID, we’ve been completely open and transparent.”

Picton said latest data showed there were 1200 healthcare workers who were furloughed on Friday due to COVID-19, which had “significant impacts” on the hospital system.

He said the number of COVID cases recorded in South Australia “seem to be in line with the modelling”, which projected a peak of up to 5000 cases sometime this month.

But he said it was too early to determine whether the state had reached its caseload peak.

“I don’t want to send a message that we’re necessarily past this because we’re still seeing significant numbers of people coming to our hospitals every day,” he said.

“We know from our wastewater detection that there is much higher numbers (of COVID cases) in the community than what our testing numbers are showing.

“Clearly there are people who are not getting tested.”

Watkins said the government was “making a lot of positive moves” to open up additional beds and bring on board new staff.

But she said she had concerns about how the hospital system would cope in the event of a sudden rush in demand.

“Whilst we’re in the midst of another wave or peak… if there were to be some sort of disaster on top of this like a plane crash, or a bus crash, or some sort of large-scale event, what is left in the tank for the government to consider to be able to escalate the response?” she said.

Picton said since coming to government, Labor had opened up “every possible bed across the system” with work urgently underway to make more capacity.

He said more than 210 beds had opened up in the past couple of months, including in peri-urban and private hospitals.

The government has also converted Angaston Hospital into a COVID-only facility.

“That’s of course on top of the over 130 beds of private sector capacity that we’re using at the moment in the health system.”