The estimated $343m collected last financial year is 17 per cent higher than initially projected, with the previous state budget only anticipating $291m in pokies revenue.

There was also a $61m windfall in overall gambling tax revenue, which includes lotteries, casino and the betting operations tax levied on online wagering.

An estimated $511m in gambling taxes flowed into the state’s coffers last financial year, up from the previous budget’s projection of $450m.

The budget papers say the increase is “mainly due to higher-than-expected collections from gaming machines in hotels and clubs”.

“Growth of 5.2 per cent in gambling taxes in 2021-22 reflects the continued strength in gambling activity since gaming venues reopened in June 2020 following COVID-19 related closures,” it states.

The $343m in gaming machine tax collected last financial year represents around 40 per cent of the total net gambling revenue (NGR) hotels and clubs made from pokies in 2021-22.

NGR – defined as gaming machine bets made minus prizes paid out – shows the amount of money lost by South Australians at the pokies in any given year.

Full NGR figures for 2021-22 are not available yet, but pokies losses last financial year had already reached $610.8m through three quarters, according to the most recent data provided by Consumer and Business Services.

The figures show more than $200m being poured into South Australian pokies every three months.

The trend, along with the estimated growth in tax revenue, means South Australians may have lost in excess of $850m at the pokies last financial year – well over the record $792.62m lost in 2007-2008.

The budget’s forecasted increase in gaming tax revenue over the next four years could see yearly pokies losses reach $900m by 2025-26, assuming no changes in tax rates.

A Consumer and Business Services graph showing total gambling revenue (NGR) and tax collected (gaming tax liability) each financial year up until 2020-21. The government projects NGR and tax figures will be higher in 2021-22 and grow over the next four years.

A 2010 report from the Australian Productivity Commission estimated that problem gamblers account for around 40 per cent of spending on gaming machines, noting the proportion could be as high as 66 per cent or as low as 22 per cent.

The latest budget forecasts come after a report tabled in parliament earlier this year found repeated government attempts to cap gaming machine numbers in South Australia were “unlikely” to succeed “at any time in the short to medium term”.

Liquor and Gambling Commissioner Dini Soulio handed down the report to the former Marshall Liberal Government in December last year, offering recommendations on how to reform the regulated system that hotels and clubs use to trade gaming machine licenses.

Soulio said a statutory goal legislated in 2013 to reduce the number of pokies that can be operated to 13,081 would fail “without some form of Government intervention”.

He noted that as of October 2021, South Australia’s casinos, hotels and clubs had the capacity to operate 13,721 gaming machines – 640 more than the legislated reduction target.

The report’s findings prompted urgent calls from the social services sector for “direct government action” to reform the trading system.

Consumer and Business Affairs Minister Andrea Michaels said in April she would “closely consider the report’s findings” and consult with key stakeholders.

“What the report highlights is that the targeted reduction of machines is occurring more slowly than was anticipated under the previous government’s amendments,” she said at the time.

Michaels told InDaily on Wednesday that she was now working with the Liquor and Gambling Commissioner on a way to “accelerate” the reduction of slot machine entitlements.

“The Government remains committed to reducing the number of gaming machine entitlements in South Australia down to the statutory target,” she said in a statement.

“Since the report was tabled, I have met with stakeholders and requested the Liquor and Gambling Commissioner for briefings about the regulatory framework for the gambling industry in South Australia, information about the review of the approved trading system for gaming machine entitlements and the provision of social services to members of the community who are at risk of harm, or at risk of causing harm to a family member, because of gambling.” 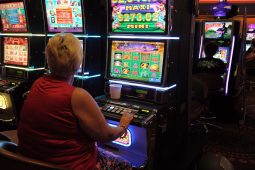 Asked what additional policies the Maliauskas Government was putting in place to address problem gambling, Human Services Minister Nat Cook highlighted initiatives of the previous Marshall Government, such as the $8.6m budgeted last year for the Gambler’s Rehabilitation Fund and an ongoing $328,000 advertising partnership with A-League club Adelaide United challenging the normalisation of sports betting.

The roughly 12,000 gaming machines operating in South Australia ranks fourth in the country, well behind New South Wales (90,508), Queensland (49,369) and Victoria (29,872), but well ahead of the ACT, Tasmania, the Northern Territory and Western Australia – all of which have fewer than 4000 operating pokies.

The Bannon Labor Government legalised pokies in May 1992 amid pressure to find new sources of government revenue after the State Bank collapse.

The legislation, which passed the Upper House by one vote, saw the first coin dropped into a South Australian slot machine on July 25, 1994.