The Termination of Pregnancy Act 2021 passed parliament in an historic vote in March last year, ending decades of advocacy to remove abortion from South Australia’s criminal code and allow terminations after 22 weeks and six days gestation.

South Australia was the last state in the country to decriminalise abortion when it passed the Termination of Pregnancy Act, but it has taken the government 15 months to enact the law.

Currently, people who want to terminate their pregnancy are still required to abide by strict provisions under old legislation, with criminal penalties in place for abortions that are performed unlawfully.

Health Minister Chris Picton yesterday afternoon announced an end to the hold-up, confirming the Governor had issued regulations that would allow the new law to come into effect from July 7.

“The former Government inexplicably stalled these regulations which support the legislation for a year,” he said in a statement.

“They delayed and buried these regulations and failed to explain to the community why they did not progress them.

“We have moved forward with these regulations to deliver on what the Parliament voted for.”

The delay followed concerns about the drafting of regulations to accompany the legislation.

Under controversial regulations drafted by the former Marshall Government last year, it was proposed that hospital CEOs or doctors would be required to report a swathe of patient information to the health minister after every abortion they performed.

The final regulations issued yesterday show hospital doctors and CEOs are now required to report a near identical amount of patient information to the chief executive of SA Health.

Information that must be reported to the chief executive includes:

The regulations state Picton could request “any other information” at his determination.

Regulations are non-legislated rules that accompany legislation and can typically be changed by a minister at the stroke of a pen.

The final regulations issued yesterday are almost identical to what the Marshall Government proposed, but they no longer require doctors to report the foetus’ gender, whether an autopsy was performed on the foetus and the date of the patient’s last menstrual period or estimated date of conception.

InDaily reported in January concerns from legal groups, including the SA Law Society, that the data collection could compromise patient privacy and deter some people from seeking abortions.

Women’s Legal Services SA argued the regulations drafted by the former government went “significantly beyond” what was set out in the Act.

“To put it crudely, our opinion when we read the draft regulations was, why don’t you just ask for the woman’s complete medical file?,” the organisation’s CEO Zita Ngor told InDaily in January.

“They’re essentially asking for everything, every little detail about the woman, even information that’s not directly relevant to the issue of the termination of pregnancy.”

But the former government and the Australian Medical Association (AMA) argued collecting data was common practice for medical procedures.

She said the “highest levels of privacy and confidentiality” would be maintained on the data collection.

“This is all about quality and safety,” she said yesterday.

“The data collected helps to ensure quality and safety is maintained.

“Complications with procedures can only be properly reported on by collecting this data which can improve health care outcomes.”

The government said the regulations were drafted in consultation with the statewide termination of pregnancy committee.

It said it was sending information on the legislation and regulations to GPs and pharmacists “so they are fully informed before the regulations come into effect”.

“We welcome the implementation of the reformed abortion law removing the outdated barriers to access for South Australians,” she said.

“We encourage all GPs to seriously consider taking up the opportunity for education in medical abortion so they can fully support and participate in this new era of improved abortion care in SA.” 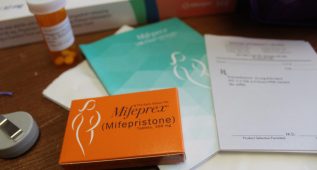 The Termination of Pregnancy Act removes a reason for a termination of pregnancy if the person is not more than 22 weeks and six days pregnant.

It also permits prescription via telehealth and removes the requirement that the treatment take place in a hospital for early medical abortion.

If a person is beyond 22 weeks and six days pregnant, two medical practitioners must both agree on the circumstances for the termination.