Chief public health officer Professor Nicola Spurrier told reporters this afternoon that new modelling by the University of Adelaide showed daily COVID cases peaking at around 4-5000 by July 12, spurred by the spread of a new Omicron variant, BA.5.

“The pandemic has not just disappeared – it is still very active as a serious infection in our community,” Spurrier said.

“We do believe that there will be a (new) wave. I don’t think it’s going to be any worse than what we have experienced with BA.1 and BA.2.

“It’s going to put some pressure on our hospital system but I don’t think it’s going to be catastrophic.”

Spurrier stressed that while the modelling was predicting 4-5000 daily cases in mid-July, there was “uncertainty” around those numbers for a range of reasons including that more people have had COVID and are now vaccinated.

“What is clear is that there is a reasonable certainty that we will have another peak in the next month but the actual size in that peak, there’s a lot of uncertainty around that,” she said.

Spurrier said the modelling predicted about 150 people would be hospitalised for COVID during the peak.

“In terms of the cases hospitalised, we will hopefully have more oral antivirals so it may or may not get as high as this but it’s sitting around the 150-mark for ward occupancy for COVID,” she said.

Currently, there are 230 people with COVID in hospital, but this includes people in hospital for other reasons who incidentally have COVID.

Spurrier said she did not have a current “like for like” number showing people currently hospitalised for COVID but Health Minister Chris Picton promised to get that information and release it.

Asked about the expected severity of BA.5, Spurrier said “at the moment we consider it’s probably no more severe but when the Adelaide University modellers have put our model together they have estimated slightly higher hospitalisation”.

Picton said the expected peak would put extra pressure on the hospital system which he described as in “crisis”.

He said “we have opened every single hospital bed we can across our health system” and authorities were now turning to the private system to cope.

He said more than 100 public patients were currently using private Adelaide hospital beds “because of the absolute pressure that the system is under” and this week another 28 private beds would be contracted by the Government.

It comes as authorities today launched an “EDs are for Emergencies” campaign to try to reduce pressure on the system by encouraging people to only go to hospital in an emergency.

The campaign will include advertisements on social media and television.

Picton said “every single day we are now faced with the situation where there are over 100 patients who are waiting for a bed inside the hospital system that are stuck in emergency departments”.

“That ultimately is because we don’t have enough capacity in those systems to get people through the system,” he said. 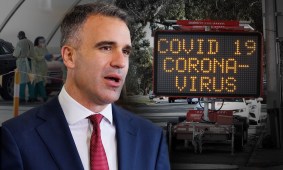 “There’s other factors such as the number of NDIS patients that we have in the system, where we have as of last count 118 patients who are in our hospitals who are waiting for NDIS placements in the community.

“That means there’s huge pressure therefore on the rest of the health system. That’s a bigger number of patients who are waiting for NDIS discharges than the size of Noarlunga Hospital – to put into context how many patients that is.

“As much as we would all like it to be the case, the pandemic is not over. We are still facing a huge pressure not only on our health system but on people throughout the community contracting COVID each and every day.”