Latest SA Health figures show a 47 per cent jump in violent and aggressive behaviours logged by public hospital and healthcare staff in the four years from 2017 to last year.

The “challenging behaviour incidents” include physical, verbal and mental abuse in hospitals and other healthcare settings as reported by workers to SA Health’s internal safety learning system.

Attacks against ambulance staff are not included in the data.

“Over the last number of years, nurses and midwives have been brutally beaten, glass doors smashed in, cans of Coke been thrown with full force and hair ripped from scalps,” she told InDaily.

“No one should be looking over their shoulders wondering if they will be hit, least of all those who are doing their best to care for others.”

The data shows hospital and health staff reported 4308 incidents last year – a 47 per cent rise on the 2926 incidents logged in 2017, with violence increasing year-on-year. 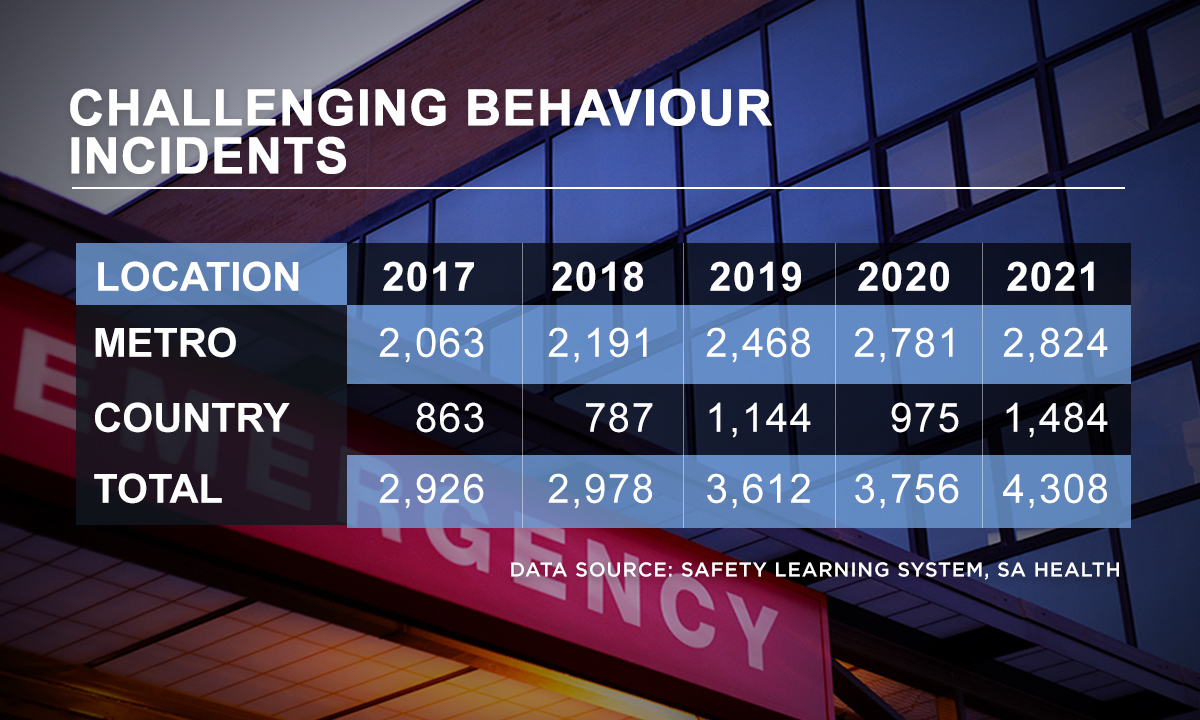 Dabars said nurses and midwives were fearful for themselves, their colleagues, patients and visitors.

“Violence and aggression in the health system is shameful and unacceptable,” she said.

“Everyone has a legal right to be safe at work.”

SA Salaried Medical Officers Association chief industrial officer Bernadette Mulholland said the “massive increase” year-on-year in cases of violence and aggression within the state’s public hospitals and health services was “consistent with a whole system being pushed to breaking point”.

“If patients can’t access health care in a timely and appropriate environment, even though unacceptable, it shouldn’t be surprising that there are increasing incidents of violence and aggression,” she told InDaily.

“Doctors and other health workers have been pushed beyond their limits due to a lack of support, resourcing, and poor planning.”

Mulholland accused authorities of failing to accept responsibility “for the shortcomings of the system they oversee”.

“It is due to their failure to publicly advocate for the system that safety of health workers and patients is compromised,” she said.

“This is never acceptable and needs to be addressed. However, bandaid solutions and additional security are not the panacea in a chronically under-resourced health system.”

Dabars said the nurses’ union secured a commitment from the former government to adopt a “zero-tolerance policy” to violence and aggression.

“They also adopted parts of the 10-point plan we were advocating to combat violence and aggression in the health system,” she said.

“Despite our advocacy, the former government failed to successfully implement their own policy.

“As a result, the policy does not reflect the real lived experience on the floor and at the bedside.

“The failure to implement means that violence and aggression continues to escalate.”

Dabars said the response from SA Health to prevent violence over the past four years was “sluggish at best, and culpable at worst”.

“We believe that the Department of Health is in breach of health and safety laws by failing to provide a safe work environment,” she said.

“We put this to the department more than 12 months ago and they rejected our assertions.

“We have (sought), and continue to seek, the intervention and action of the regulator, SafeWork SA, with varying, yet overall limited, results.”

Dabars said “real action on the ground” was needed.

“Most importantly, we need actions that prevent and deter violence and aggression,” she said.

Dabars said Labor had committed to its 10-point plan prior to the election and Premier Peter Malinauskas had since committed to a review of workplace security in regional hospitals, following a significant rise in violence.

“We plan to progress those conversations over the coming weeks to bring life to those commitments and to achieve real change in the health system that will make hospitals and health care a positive and safe place for nurses, midwives, other health professionals and the communities they serve,” she said.

Health Minister Chris Picton said “our hard-working frontline health workers have faced increasing levels of violence while they are working tirelessly to care for patients”.

“This significant rise in incidents occurred under the watch of the former Liberal Government,” he said.

“It is not clear what if anything the former government did to protect health care workers against this kind of behaviour.”

Picton said the Malinauskas Government had “committed to working with the ANMF on a 10-point plan for protection of frontline nurses and midwives”.

“We have also committed to an independent review of security arrangements at Port Lincoln Hospital where there have been a number of assaults on healthcare workers,” he said.

“We are also opening more than 550 beds across the system to help create capacity and reduce lengthy delays that only increase the risk of violence to healthcare workers.”

An SA Health spokesperson said “we are committed to providing a safe environment for all staff, patients and visitors at our health sites”.

“Everyone has the right to be safe in their workplace and any act of violence or aggression in a hospital is not acceptable,” the spokesperson said.

“Responding to patients with challenging behaviour requires expert management and our staff undergo regular training to support them and develop their skills in managing such behaviour.

“Challenging behaviour includes any behaviour with the potential to physically or psychologically harm another person or property and it can range from verbal abuse through to threats or acts of physical violence.”

The spokesperson said SA Health had procedures in place to help staff to prevent, recognise and manage challenging behaviour, including awareness campaigns and education sessions.

“Reporting of challenging behaviour is encouraged in our hospitals so leaders can respond to the data to help prevent future incidents,” the spokesperson said.

“The former Liberal government introduced a suite of measures to boost security at public hospitals, including significant investment in physical security upgrades across both metro and regional hospitals,” she said.

“It also introduced a dedicated state-wide strategy – the SA Health Challenging Behaviour Strategic Framework – to strengthen resources available to staff to minimise the escalation of dangerous situations – an initiative welcomed by the ANMF.”

Hurn said the former Liberal government also introduced “the toughest laws in state history to protect our frontline health workers with a maximum 15-year jail sentence for anyone who causes harm to or assaults a prescribed worker”.

“Proactive steps were taken to address challenging behaviour and while these results are concerning, they reflect the challenges we face,” she said.

“The responsibility now rests with the Labor Government to address them.”