More than 10 police officers outnumbered a handful of anti-vaccination protestors who gathered outside the court to hear Stevens give evidence in AFLW player and nurse Deni Varnhagen’s ongoing legal bid to overturn the state’s health care worker vaccination mandate.

Stevens’ entrance was relatively uneventful compared to the yelling that greeted chief public health officer Professor Nicola Spurrier outside court when she was summoned to give evidence in the trial earlier this month.

Ahead of today’s hearing, one protestor filmed a contingent of about a dozen police officers who were stationed outside the court entrance, but the group otherwise remained silent before filling two court rooms. 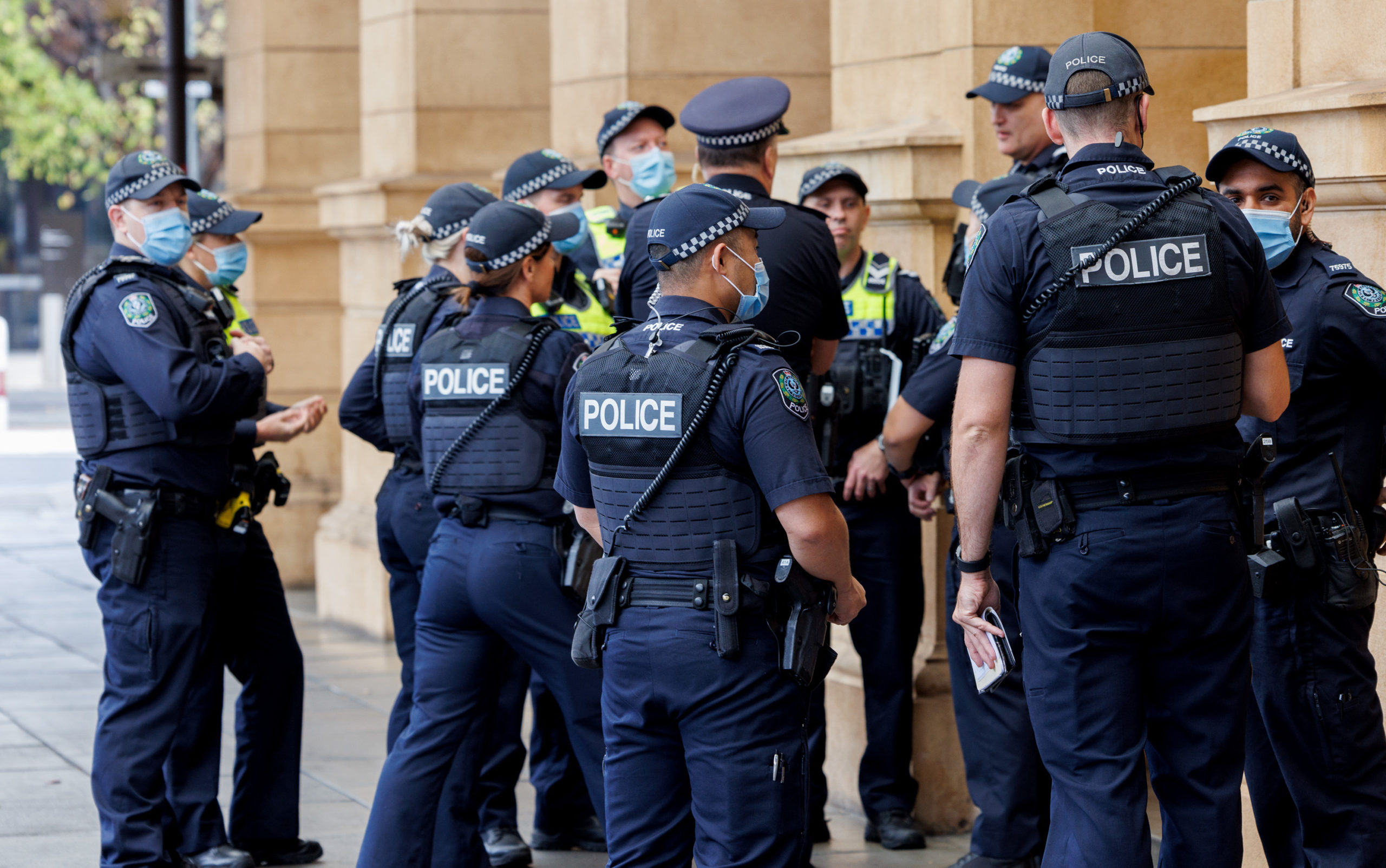 Stevens, who signed off on South Australia’s mandates under the Emergency Management Act in his role as state coordinator, was absent from the trial for the last two weeks while battling an Influenza A infection.

During a lengthy hearing this morning, Simon Ower QC, appearing for Varnhagen, questioned Stevens about a decision to mandate COVID-19 booster vaccinations for health care workers on January 6.

He said he had several conversations with Spurrier about the need to impose the mandate, but could not recollect the dates of those conversations, citing an “iterative” process of “ongoing consultation”.

He said the only written advice he received was in an email he received the afternoon before imposing the mandate.

“I’m quite certain that I would have had conversations with Professor Spurrier about the third dose of the vaccine,” he said.

“(There were) frequent conversations with Professor Spurrier and other members of SA Health regarding the Omicron variant and the impact it was having on our COVID response, including the efficacy of the vaccine with it being two doses compared to the requirement for a third dose.”

Ower read a section of Spurrier’s email to the court, in which the chief health officer claimed there was “sound scientific evidence that a booster or third dose markedly increases vaccine effectiveness against Omicron, therefore, the third dose booster is recommended to increase protection”.

Stevens said he agreed there was “ambiguity” in the email, but reiterated he had “ongoing conversations” with Spurrier about the impact of the vaccine.

Ower also asked Stevens whether a decision to alter vaccine mandates for police officers could have also been applied to healthcare workers.

Stevens said he was comfortable making the decision given the high vaccination rate among SA Police workers.

It comes after Spurrier was earlier this month forced to run a gauntlet of anti-vaccination protestors outside court after Varnhangen’s legal team subpoenaed her to appear before the trial.

Before appearing in court this morning, Stevens told FiveAA the scenes that greeted Spurrier were “completely disgraceful”.

“Unfortunately, there are people out there who have divergent views,” he said.

“We certainly respect people’s right to hold different views, but there’s a way to behave and what we saw with the conduct of that crowd when Professor Spurrier was going to and from court was completely disgraceful.

“There’s no excuse for it. I’ve heard other people say it’s disappointing and it’s not what we’d like to see as part of our community, but I think these people need to have a good hard look at themselves.”

Asked about his battle with Influenza A, Stevens said: “Notwithstanding some experts out there – Panadol just doesn’t cut it”, in an apparent reference to Varnhagen’s counsel Lorretta Polson telling Stevens last week to “take a Panadol and come to court”.

Varnhagen was placed on the Crows’ inactive list after refusing to follow the club’s vaccination policy. She told the court she also lost shifts as a nurse at Flinders Medical Centre and Glenelg Day Surgery and has been working as a labourer after being stood down.

Varnhagen is one of two nurses who brought on the trial.