The rise in inflation has likely brought forward the timing of an increase in the cash rate, the Reserve Bank of Australia has warned.

In the minutes of its April board meeting, the RBA said it expected a further increase in inflation, with measures of underlying inflation in the March quarter expected to be above three per cent – above the two to three per cent target.

“These developments have brought forward the likely timing of the first increase in interest rates,” the minutes said on Tuesday.

“Over coming months, important additional evidence will be available on both inflation and the evolution of labour costs.”

“Consistent with its announced framework, the board agreed that it would be appropriate to assess this evidence and other incoming information as it sets policy to support full employment in Australia and inflation outcomes consistent with the target,” it said.

Noting the four per cent unemployment rate, a further strengthening of aggregate wages growth and broader measures of labour costs was expected.

The pick-up was still expected to be only gradual, although there was uncertainty about the behaviour of wages at historically low levels of the unemployment rate.

“Overall, the growth outlook remained positive for this year and next,” the minutes said.

“At the same time, rising prices were impinging on households’ spending power and the floods had been very disruptive for many communities.”

A number of moderate MPs privately declared before the ballot that they would back Speirs.

Marshall, who has led the Liberals since 2013, this morning said he expected the party would win the next state election.

“I look forward to the future and watching the Liberal Party progress further under the guidance of a new leader,” the former premier said in a statement.

“I am confident the Liberal Party will return to Government in 2026 to achieve the best outcomes for South Australians.

“For now, I am excited to take a step back and spend more time with my children while I continue to represent the people of Dunstan.”

Anthony Albanese will seek to highlight Scott Morrison’s inaction on disaster response as the second week of the federal election campaign ramps up after the Easter long weekend.

The Opposition leader will remain in marginal Queensland seats, areas where Labor will need to make up ground if it wants any chance of forming government, while Morrison will continue to campaign in crucial marginal electorates in Western Australia.

Albanese will use the ninth day of the campaign to talk up a $38 million funding pledge over three years to Disaster Relief Australia – a veteran-led organisation assisting communities after natural disasters.

The funding would allow for the organisation to have 5200 more volunteers join the ranks, along with helping to cover recruitment, training and equipment.

The announcement comes off the back of the opposition leader attacking the prime minister for his handling of the Black Summer bushfires and the recent floods in Queensland and northern NSW.

Morrison will spend the day in WA spruiking the government’s economic management at an address to the Chamber of Minerals and Energy. 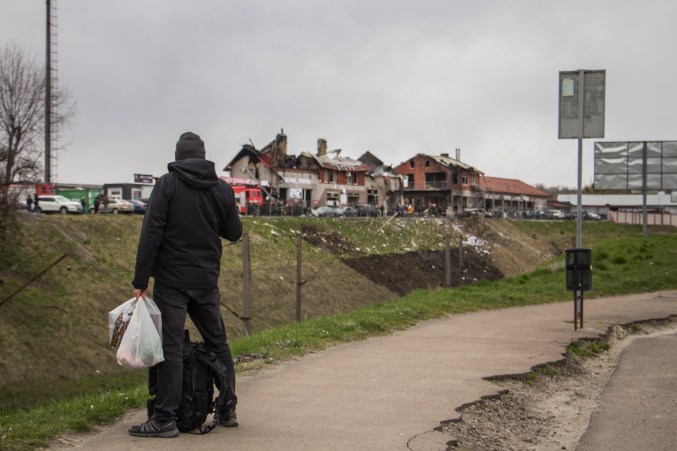 Russia has launched its long-feared, full-scale offensive to take control of Ukraine’s east, Ukrainian President Volodymyr Zelenskyy says, after a series of deadly missile strikes in the western city of Lviv.

“Now we can already state that the Russian troops have begun the battle for the Donbas, for which they have been preparing for a long time,” he said in a video address.

Zelenskyy said a “significant part of the entire Russian army is now concentrated on this offensive”.

The Donbas is Ukraine’s mostly Russian-speaking industrial heartland in the east, where Moscow-backed separatists have been fighting Ukrainian forces for the past eight years and have declared two independent republics that have been recognised by Russia.

In recent weeks, Kremlin declared the capture of the Donbas its main goal of the war after its attempt to storm Kyiv failed.

“No matter how many Russian troops are driven there, we will fight,” Zelenskyy vowed.

“We will defend ourselves. We will do it every day.”

The announcement from Zelenskyy came as Russia bombarded the western city of Lviv and numerous other targets across Ukraine in what appeared to be an intensified bid to grind down the country’s defences.

At the same time, the Kremlin continued building up its forces in the east.

At least seven people were reported killed in the missile strikes on Lviv, a city close to the Polish border that has seen only sporadic attacks during almost two months of war and has become a haven for civilians fleeing the fighting elsewhere.

In other developments, a few thousand Ukrainian troops, by Russia’s estimate, remained holed up at a mammoth steel mill in Mariupol, the last known pocket of resistance in the devastated southern port city.

And Zelenskyy has submitted a filled-out questionnaire in the first step toward obtaining membership in the European Union — a desire that has been a source of tension with Moscow for years.

Defence Minister Peter Dutton on Monday conceded negotiations with Naval Group about the government’s decision to tear up the contract in favour of nuclear-powered submarines as part of the new AUKUS security pact were expected to drag out.

It was originally hoped the settlement between Australia and Naval Group would be finished by the end of the current financial year.

However, Dutton said it would most likely carry on into the next financial year.

“It will be after the election, it’ll take some time,” Dutton told reporters.

“The negotiations are under way at the moment, so once those figures have been settled, then we will provide that information.”

Earlier this year, a Senate estimates hearing was told termination costs as part of the previous submarine deal could be more than $5.5 billion.

Taxpayers have already been slugged more than $2.5 billion for Australia pulling out of the deal.

Dutton said he did not want to state the figure that was being negotiated with Naval Group.

“What happens in a commercial negotiation is if the other side knows that you’ve got a hard deadline, then they’ll hold you over a barrel,” he said.

The comments came as Dutton announced the Collins class fleet built between 1990 and 2003 will be made stealthier after the $381m upgrade to install a “cutting edge optronics system” at Osborne in Adelaide.

Replacing the existing periscope system, Dutton said optronics involves a digital camera on an extendable mast-raising system outside the pressure hull taking images and transmitting it into the submarine digitally.

HMAS Rankin will be the first submarine to undergo the upgrade from 2024, with the technology operational by 2026.

Carlton coach Michael Voss has contacted former Port Adelaide player Tom Rockliff after he was spat at by a Blues supporter when leaving the MCG on Sunday afternoon.

Rockliff took to Twitter and said he was outside the ground with his four-year-old son when the Carlton fan spat at him.

“What a way to be let down,” Rockliff wrote.

“Carlton supporters spitting at me when I am walking home with my son is not on.

“I admit I was cheering harder than anyone at the ‘G and pushed it – but there is a difference between cheering and being spat at.”

Voss, who was an assistant coach at the Power when Rockliff was at the club between 2018 and 2021, contacted the retired midfielder after finding out about the incident on Sunday night.

“They’ve been really good and it’s not a Carlton thing,” Rockliff said.

“I spoke to Vossy. He called me (on Sunday) night. So it’s not any single club supporter thing.

“It’s just one of those things unfortunately that happens sometimes.”

Carlton withstood the fast-finishing Power to win by three points after leading by 49 points at halftime.