Australians will still be able to vote on election day if stuck in COVID-19 isolation as a confirmed case or close contact.

The Australian Electoral Commission has confirmed it will roll out a telephone voting system for those subject to isolation orders on the day of the May 21 poll.

“We are working on a telephone voting option, which will be a first,” AEC boss Tom Rogers told ABC Radio on Monday.

Voters who have missed pre-polling and postal vote options will have to make a declaration they’re subject to a health order to access the “emergency” measure.

Rogers said the declaration would stop people “gumming up” the system for others.

“If we have to read out the Senate ballot paper for people in telephone voting, it’s going to take some time. So I urge people to only use that if they are actually subject to that health order,” he said.

Confirmed COVID-19 cases and most close contacts are currently required to serve seven days in isolation across the country.

But the expert health body recommended the seven-day isolation rule for close contacts remain until the peak passes for the current Omicron wave, expected sometime in April.

Prime Minister Scott Morrison has started his re-election bid along the NSW South Coast while Opposition Leader Anthony Albanese has touched down in Tasmania, with both leaders using day one of the campaign to hit marginal seats.

Morrison flew to Nowra on Sunday afternoon after announcing the election in Canberra, targeting the marginal seat of Gilmore which is held by Labor on a slim 2.6 per cent margin.

The region was one of the hardest hit by the Black Summer bushfires in 2019/20, with recovery then stalled due to the pandemic.

Former NSW minister Andrew Constance – who attracted national attention for his response during the fires – is hoping to win the seat back for the Liberals off Fiona Phillips.

Morrison will announce $40 million worth of local road upgrades across the Shoalhaven region as he sells his government’s economic credentials.

“Australia’s economic recovery is leading the world, and investments like this, right here in the Shoalhaven, will keep creating local jobs and drive our record low unemployment rate down,” he said.

Meanwhile, Albanese took his travelling contingent to Tasmania after the starting gun was fired as he prepares to campaign in the Liberal-held seat of Bass, spruiking Labor’s mantra of a better future.

Bass is held on a 0.4 per cent margin by outspoken backbencher Bridget Archer, who crossed the floor against the government over a federal integrity commission and is one of the moderates who spoke out against parts of the government’s religious discrimination bill.

Labor will use the first full day of the campaign to announce better care for children with hearing loss, pledging $1.5 million to fund the development of the digital HearHub platform, an online service that will deliver hearing tests and support for families.

It will also establish two new Shepherd Centres, which run the platform, in Launceston and Hobart with $2.5 million of funding behind them.

The latest Newspoll indicates Morrison has pulled ahead of Mr Albanese as preferred prime minister but Labor remains in poll position despite a further fall in popular support.

South Australians over the age of 65 will from today be able to receive a flu jab at five metropolitan COVID-19 vaccination clinics in a bid to further ease pressure on the hospital system over winter.

The Malinauskas Government announced on Sunday that the Elizabeth, Noarlunga, North Adelaide, Wayville and Kilkenny COVID vaccination clinics will offer over-65s both influenza and coronavirus jabs on the same day.

The flu vaccination push coincides with a State Government COVID-19 booster shot campaign and the rollout of a fourth COVID jab to over 65s and vulnerable groups across the country.

“[That is] a consequence of the COVID numbers that we’re now seeing within the community,” he told reporters yesterday.

“But if we have flu over and above that, that will present yet another challenge to pressure on our hospital system in a way that is avoidable through people getting vaccinated.”

Health authorities are warning influenza cases will be higher this winter with international travel back and COVID-19 restrictions easing.

But South Australia’s indoor mask mandates are still scheduled to be dropped for the Easter long weekend, with the Emergency Management Council to meet on Tuesday to discuss the state’s COVID-19 restrictions.

SA Health reported one death and 4222 COVID-19 cases yesterday, although testing was down 13.6 per cent on Saturday compared to Friday.

Hospitalisations have jumped to 222 people, up from 201 the day before, with 11 people in intensive care and two on a ventilator. 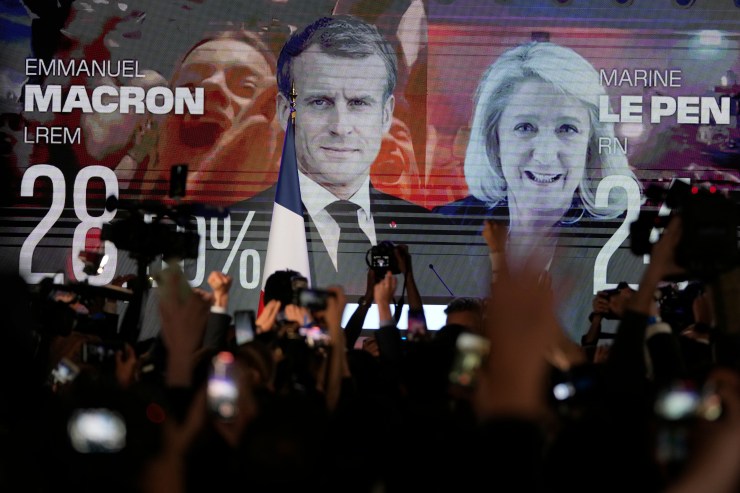 Macron garnered 28.1-29.5 per cent of votes in the first round while Le Pen won 23.3-24.4 per cent, according to separate estimates by pollsters Ifop, OpinionWay, Elabe and Ipsos.

That would set up a duel between an economic liberal with a globalist outlook in Macron and a deeply Eurosceptic economic nationalist who, until the Ukraine war, was an open admirer of Russian President Vladimir Putin.

Hard-left candidate Jean-Luc Melenchon, who polled third on Sunday with an estimated 20 per cent, called on his supporters not to vote for Le Pen in the second round.

“We know for whom we will never vote… you should not support Le Pen… there must not be one single vote for Le Pen in the second round,” Melenchon said.

Socialist candidate Anne Hidalgo, who polled ninth with just under 2 per cent of votes, backed Macron.

“So that France does not fall into hatred of all against all, I solemnly call on you to vote on April 24 against the far-right of Marine Le Pen,” she said.

Conservative candidate Valerie Pecresse also said she would vote for Macron, warning of “disastrous consequences” if he did not win the run-off.

But former journalist and hard-right candidate Eric Zemmour endorsed Le Pen, telling supporters he had differences with her but “I don’t doubt who is the adversary. That’s why I call on my supporters to vote for Marine Le Pen.”

Not for two decades has a French president won a second term. 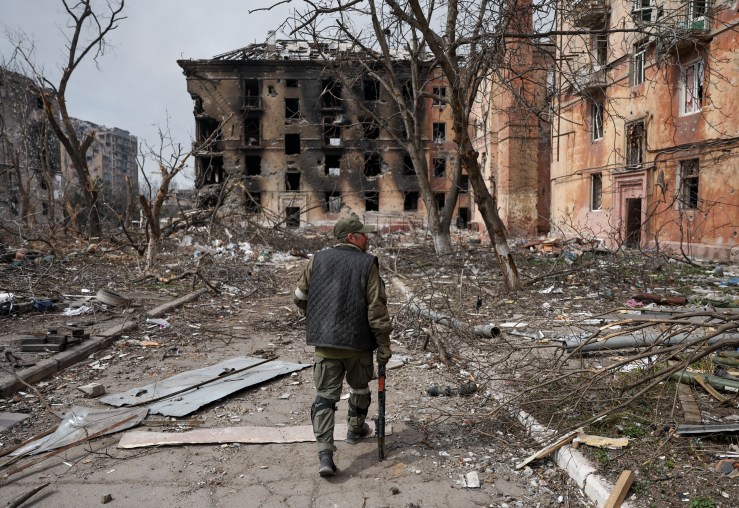 A serviceman on the street in the city of Mariupol. Photo: Sergei Bobylev/TASS/Sipa USA

Ukraine’s border guard agency says about 2200 Ukrainian men of fighting age have been detained so far while trying to leave the country in violation of martial law, as Russian forces continue shelling targets in eastern Ukraine.

The agency said on Sunday that some of them have used forged documents and others tried to bribe border guards to get out of the country.

It said some have been found dead while trying to cross the Carpathian mountains in adverse weather, without specifying the number.

Under martial law, Ukrainian men between 18 and 60 are barred from leaving the country so that they can be called up to fight.

Russia has failed to take any major cities since it launched its invasion on February 24 but Ukraine says it has been gathering its forces in the east for a major assault and has urged people to flee.

Missiles completely destroyed the airport in the city of Dnipro, according to Valentyn Reznichenko, governor of the central Dnipropetrovsk region.

Russia’s defence ministry also said that high-precision missiles had destroyed the headquarters of Ukraine’s Dnipro battalion in the town of Zvonetsky.

Crows AFLW dynasty to be honoured in Rundle Mall 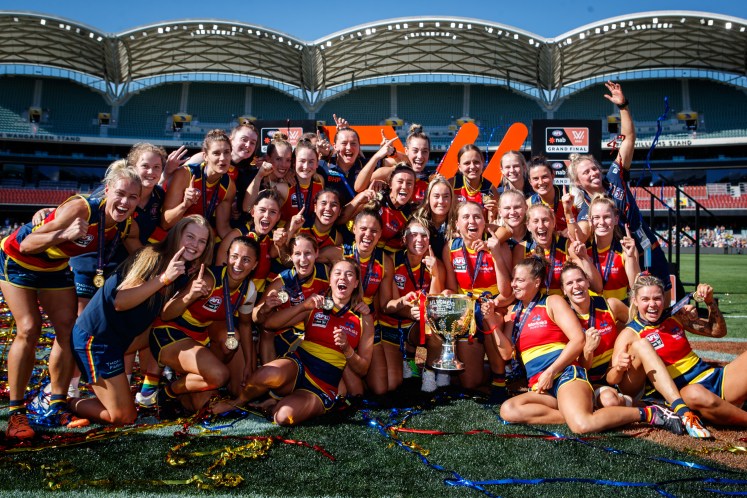 Adelaide’s three-time premiership-winning AFLW side will continue their celebrations this evening at a state-hosted event in the city.

The Crows – who on Saturday cemented themselves as an AFLW dynasty with a 13-point Grand Final win over Melbourne – will be honoured with a public celebration under the Rundle Mall canopy at 5pm today.

Adelaide has now won three out of five AFLW grand finals, adding the 2022 premiership to their triumphs in 2017 and 2019.

Lord Mayor Sandy Verschoor, whose council is co-hosting the event alongside the State Government, said she hoped to see a big crowd at the event.

“These women are such impressive role models, in particular for young women and girls, so I look forward to seeing a big crowd gather on Monday in Rundle Mall to show them our appreciation and help mark this historic third AFLW premiership,” she said.

Crows coach Matthew Clarke faces a huge challenge over the offseason to keep his record-breaking side together, with expansion clubs Essendon, Hawthorn, Sydney and Port Adelaide set to join the competition next season.

The new clubs will be able to poach up to 14 players each from existing clubs, with Adelaide star Erin Phillips set to be Port Adelaide’s top target for their inaugural season.