Although the last parliament ushered through landmark social reforms on abortion and voluntary assisted dying, decriminalising prostitution remains a vexed piece of legislation in South Australia which has failed on 13 separate attempts to pass through parliament.

Soliciting prostitution in SA can attract a maximum penalty of $750, while those found to be living on the earnings from prostitution or managing a brothel can be fined up to $2500 or jailed for six months.

But South Australia’s criminal approach to prostitution has attracted criticism, including from chief public health officer Nicola Spurrier and the Law Society of South Australia – both of whom argue it discourages sex workers from reporting crimes against them and creates barriers to accessing health services.

The most recent push to decriminalise in 2019 was shot down 24 votes to 19 in the Lower House before it could reach a third reading, with nine MPs in Labor’s Right faction voting against the legislation.

Labor leader Peter Malinauskas and new health minister Chris Picton were among those to vote against the last Bill, while then-Liberal premier Steven Marshall supported it. 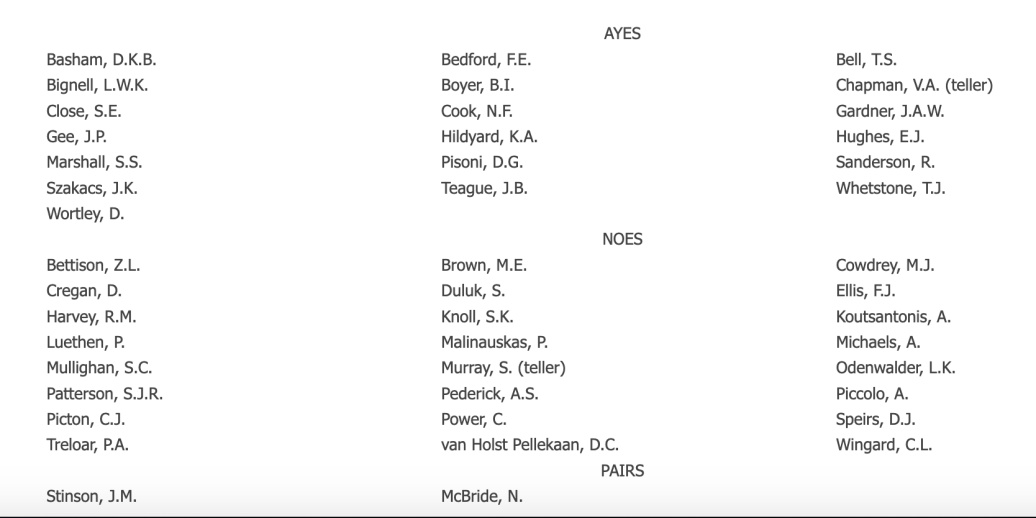 How MPs in the Lower House voted on the last push to decriminalise sex work. Photo: Hansard

But despite previous opposition from key members of the new Labor Government, sex worker advocates have expressed confidence to InDaily that the newly-elected parliament will support a 14th attempt at reform.

“I think parliament was a bit overwhelmed by those string of all those social policy conscience votes,” Thain said.

“Things that we heard from MPs was that they were concerned because of the suite of conscience issues on social policy, they were worried about the Australian Christian Lobby putting in their resources to campaign against them.

“The election has just passed. Now that we’re over that hill, I think that’s going to free up some MPs who were perhaps concerned about that.”

Greens MLC Tammy Franks, a champion of the most recent attempt at decriminalisation, said she expects parliament to be debating a sex work Bill as early as this year.

But Christian lobby group Family Voice Australia has already indicated it will be campaigning “vigorously” to MPs this year to reject any attempt at reform.

We will bluntly ask MPs if they would want their own daughters in sex work.

“While prostitution is likely to be the next moral question to be considered by state parliament, we are yet to see if the new Lower House is less or more libertarian before the election,” FamilyVoice SA director David d’Lima said.

“We certainly urge Premier Malinauskas, as the father of daughters, to maintain his rejection of any endorsement of the prostitution trade.

“FamilyVoice Australia will vigorously urge MPs to rejected any normalisation of prostitution because it is inherently damaging and degrading.

“We will bluntly ask MPs if they would want their own daughters in sex work.”

The makeup of the 55th South Australian Parliament, however, appears to be more favourable to sex work reform, with eight Liberals who voted against the 2019 decriminalisation Bill no longer in parliament.

Sex worker advocates have also been buoyed by Labor governments in Victoria and the Northern Territory which have moved over the last three years to join New South Wales in fully decriminalising sex work.

It was always a little bit ironic to me that we came very close to decriminalisation under a Liberal government as opposed to a Labor Government, considering you would imagine sex workers’ rights would be a labour rights issue.

But the next push in South Australia could still prove divisive, with a parliamentary committee set up in 2020 to examine the issue failing to reach a position before it was unceremoniously dissolved before the state election.

The committee, chaired by Tammy Franks and consisting of two Labor and Liberal MLCs along with independent John Darley, handed down its final report in February.

“Members of the Committee held divergent views, with some being supportive of the Bill, while others were not,” the report states.

“A majority position on the substantive contents of a report could not be established, nor could the Committee make any recommendation in regard to the passing of the Bill.”

The committee received 148 submissions, 71 in favour of decriminalisation, 74 against and three which stated no position.

It also received data from SA Police revealing 11 charges were laid last financial year for prostitution-related offences in South Australia, seven of which were for keeping a brothel and four for receiving money in a brothel.

The figures show police used their powers under the current laws to raid brothels 27 times in FY21, 56 times in FY20 and 100 times in FY19.

South Australia is one of three jurisdictions in Australia to criminalise brothels, along with Western Australia and Tasmania.

Police commissioner Grant Stevens wrote to the committee last year to say SA Police would not support any sex work decriminalisation bill without a “robust” licensing system for brothels to prevent an “insurgence” of organised crime into the industry.

It’s understood the committee is unlikely to be re-established when parliament reconvenes later this year. Sex Industry Network general manager Kat Morrison said it was “questionable” whether another committee was needed.

“I think the results are in and I think we all know that decriminalisation is the best way forward,” she said.

“It was always a little bit ironic to me that we came very close to decriminalisation under a Liberal government as opposed to a Labor Government, considering you would imagine sex workers’ rights would be a labour rights issue.

“We hope that this new compliment of politicians will be open to hearing and acting upon the evidence that has been explored and presented around the world and currently around Australia.”