The Marshall Government hopes the scholarships, worth up to $10,000 each, would drive more women into the bourgeoning space industry in South Australia by helping them cover the cost of tutors, IT equipment and excursions related to STEM subjects.

“We want to see more women in space – that means more women studying STEM subjects at schools,” said the Premier, who is also Space Minister.

“With the international focus on space at the moment, we know this is one of the fastest-growing sectors in the world.

“This is all about a stronger future for South Australian women opening up new and exciting opportunities.”

But when asked by InDaily if he would hand his space portfolio to a woman MP if he won the March 19 state election, Marshall responded: “No.”

“I think it is the responsibility of the Premier to take on the space portfolio,” he said.

“This is one of the fastest-growing sectors in the world. We are unequivocally the space capital for Australia.

“There are so many firms which are now setting up in our state because we have the headquarters here and mission control here.

“No longer is the sky the limit in terms of space careers.”

The Marshall Government continued its attack on Labor’s spending this morning, with the Premier once again branding the Opposition as “reckless” – a word increasingly being used by the Liberals throughout the election campaign.

“We all know that when Labor spends it’s the voters who pay – this is in their DNA.”

When queried on the fact taxpayers would also pay for Liberal Party policies if they win the election, Marshall said: “What we’ve done is to make sure that we return to the black next year.”

“In fact, we’re the only state in Australia outside of Western Australia that is going to do that.”

The Opposition this morning branded the repeated attacks as “desperate spinning”.

“Since the Premier has got no ideas of his own, he seems to be preoccupied criticising the ideas of others, and I think that’s more a reflection of him than anything else,” Labor leader Peter Malinauskas said. 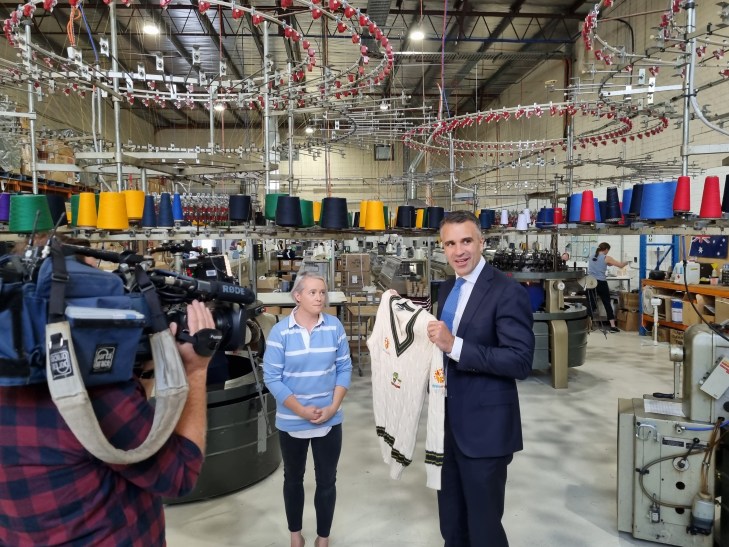 Labor’s campaign centrepiece was a suite of reforms to the State Government’s procurement policies to redirect five per cent of the $8.5 billion in public tenders awarded each year.

The policy, Labor says, will see an additional $425 million in procurement flow to South Australian companies.

Other reforms announced today include $900,000 extra for the Auditor-General to identify how much procurement money is being directed locally and a requirement for department chief executives to personally sign off on tender outcomes that don’t go to South Australian companies.

The promise which received the most scrutiny, however, was a mandate that 90 per cent of labour hours on major infrastructure projects must go to South Australian workers.

Speaking in Hindmarsh at the Silver Fleece clothing factory, Malinauskas rejected suggestions that this mandate was implausible, saying: “I just don’t accept that we don’t have the expertise.”

“The skills shortage isn’t South Australian-centric, this is a national crisis, and why on earth would South Australian government be taking people away from Victoria and New South Wales when we should be using the opportunity to train and upskill our own?” he told reporters.

“If the Liberal Party’s position is that we should be using taxpayers to fund interstate workers, then that’s their prerogative, but it’s a dire reflection of the lack of foresight and an investment in skills.

“If Labor forms government at the election, all major infrastructure projects that we sign off on will ensure that there is a component within that contract that delivers a 90 per cent minimum of work provided for.”

Malinauskas even committed to enforcing this mandate for the tunnelling stage of the North-South Corridor, one of the state’s most complex infrastructure projects, insisting the South Australian civil contracting industry “have the capability” to carry out the 4500-job upgrade.

“We have the capability to do that, we should be mandating that that happens.

“There will be an element of that project that will require skills to come from interstate, and that’s what that 10 per cent allows for.”

Malinauskas also played down concerns that the policy could see taxpayers forking out more for procurement if cost-effective quotes from interstate are overlooked.

Asked if a South Australian company quoting a 30 per cent higher price would win a tender, Malinauskas said: “If there was a 30 per cent cost differential, then that company wouldn’t get the project.”

“The issue here is when there’s a South Australian company offering a quality product at a competitive price, that South Australian business should get the job ahead of an interstate company or an overseas firm,” he said.

Labor’s policy would also mandate that all public housing projects use South Australian manufactured products “where possible”, and re-establish Brand SA along with a new buy local campaign for SA supermarkets. 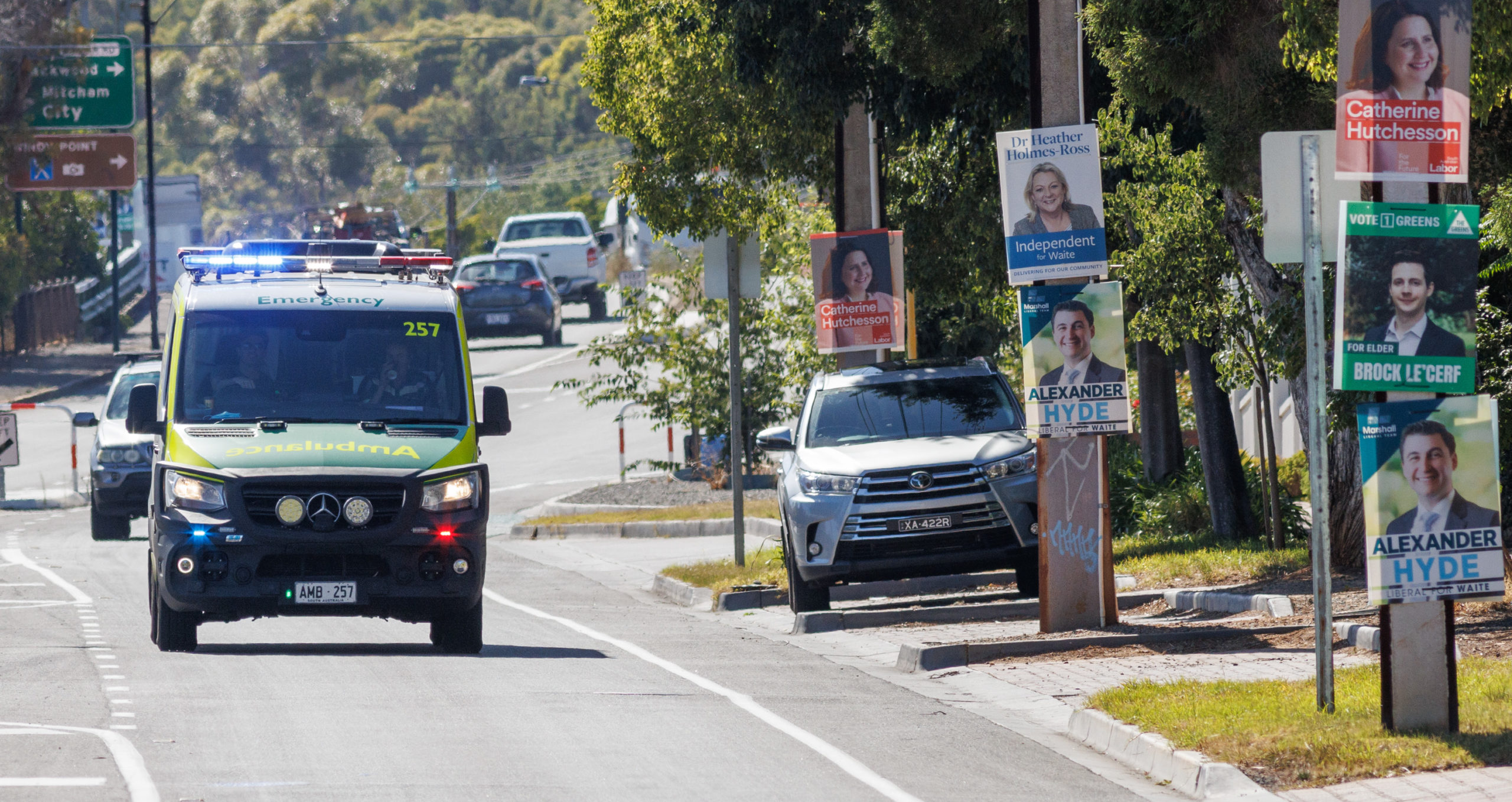 Meanwhile, Marshall said the government had launched an investigation after the SA Ambulance Employees Association reported that two South Australians had died while waiting for an ambulance yesterday.

In a social media post, the association wrote that the first death occurred in the early hours of Monday morning after a priority one patient in cardiac arrest waited 14 minutes for an ambulance, when they should have only waited for eight minutes.

They said the second death occurred on Monday night, when a priority two patient with chest pain waited 35 minutes for an ambulance, when they should have only waited 16 minutes.

“Both were unable to be resuscitated,” the association wrote.

“In an emergency, minutes count.

Marshall said he spoke to the SA Ambulance Service this morning, who told him they were aware of one of the cases.

“They’re doing an investigation but they don’t have information on the other allegation,” he said.

“What we know is that we need to end ramping in South Australia.

Malinauskas said Labor had made health a “front and centre” issue this election campaign.

“A government I lead will not put our head in the sand and will start to address the problem,” he said.

SA Ambulance Service confirmed an internal review was underway and apologised to the patients’ families.

“SAAS offers sincere condolences to the loved ones of both patients during this extremely upsetting time,” a spokesperson said in a statement.

“While many factors influence SAAS’s response to a patient, we continue to implement measures where possible to enhance patient care and improve our response times.

“Our ambulance crews have a difficult and tremendously important job. It is undoubtedly distressing for everyone involved when a patient outcome is not positive and when SAAS fails to meet community expectations.”