The commitment of $8 million over four years would go towards interstate and overseas marketing, headline anchor events, and additional grants for artists.

“It’s been a tough couple of years for the arts sector due to COVID,” Malinauskas told reporters. “We want the arts community in this state to know that a Labor Government will back you and support a strong arts and creative sector.”

Malinauskas was joined at the Labor announcement by Croall, who said Fringe organisers are “just absolutely thrilled” with the pledge.

“Doubling down on the Fringe is the clear way to go,” Croall said. “We’re calling on all parties to make this commitment, because the Adelaide Fringe is a jewel in the crown and we need to look after it, we can’t take it for granted, we can’t just think the Fringe will forever be this brilliant.”

The funding boost is in line with the recommendations of a PwC report issued last year that found that for each additional $1 invested by the South Australia government, the Fringe could generate an additional $40 for the state economy.

The analysis found an additional $2 million would see gross expenditure supported by the Fringe reach over $160 million in 2025 — and that the festival would struggle to recover to pre-COVID levels without additional backing. 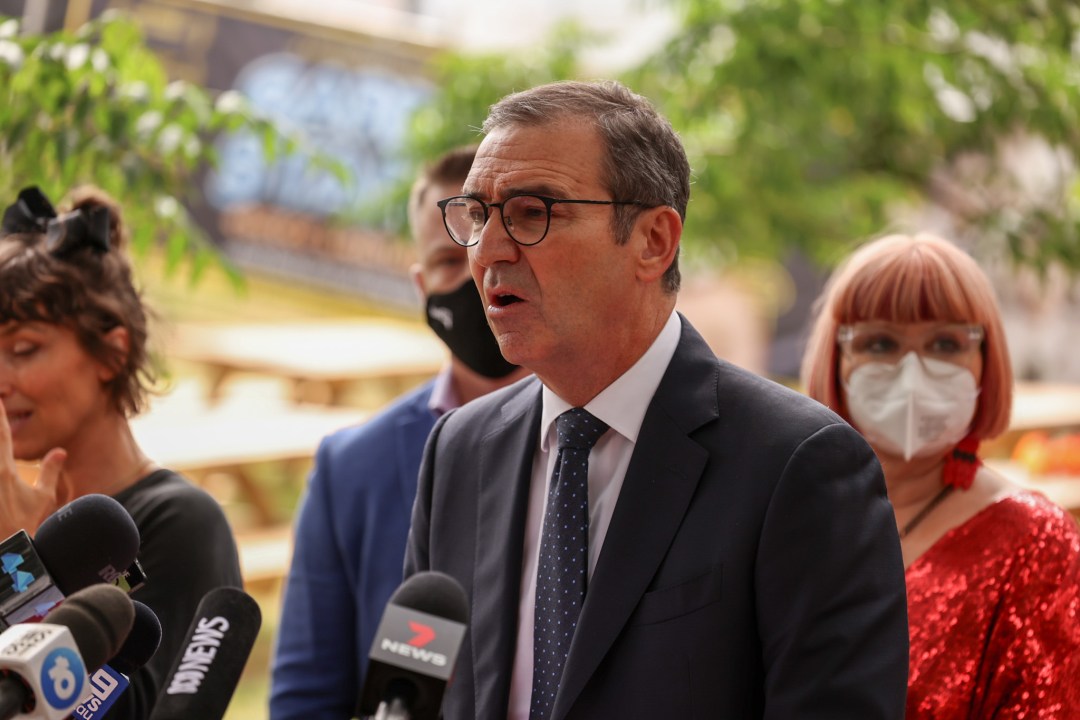 Just over an hour after the Labor event, Croall joined Premier Steven Marshall to formally launch the 2022 Adelaide Fringe.

Marshall told assembled media he would not match Labor’s funding pledge, despite Croall’s emotional plea for more support for her event.

Adelaide Fringe Festival director Heather Croall breaks down in the middle of the press conference due to a lack of funding the event receives. @9NewsAdel pic.twitter.com/AjybVB1Zlh

The State government today announced however that public transport from noon Fridays until midnight Sundays will be free from tomorrow until March 20, in a bid to support the festival season.

In 2021 the Marshall government provided the Fringe with an additional payment of $1.45 million to support local acts and make the festival hub COVID-safe.

That is in addition to the festival’s regular funding of $2.4 million a year.

At a business lunch both Marshall and Croall attended in Adelaide on Wednesday, the Premier defended his state government’s arts investment, arguing he viewed the sector as a key point of difference from Sydney and Melbourne.

“Creativity is in our DNA in this state, and I don’t think any South Australian government has ever invested so much in the arts sector,” he said.

Fringe Chair Kate Costello wrote to Labor, the Liberals and Greens in January calling for all three parties to fund the event in line with the recommendations of the PwC report.

The Greens today also confirmed their support for the report’s funding recommendations.

Over 100 artists have also put their names to an open letter calling on all South Australian political parties to commit as an election promise to increasing Fringe funding in line with the report.

The open letter, signed by artists including cabaret artist Reuben Kaye, burlesque performer Chrissie Brown and singer Michael Griffiths, argues that the Fringe serves as a foundation for the state’s artistic sector to thrive year-round.

“As artists, we are not in the habit of making solely economic arguments for increased support to the arts, although when speaking about the Adelaide Fringe the extraordinary return on investment to the state is impossible to ignore,” the letter read.

COVID measures will also be in place for the 2022 edition of Fringe, with all venues are selling to a maximum 75 per cent capacity and socially distancing measures in place.

A Welcome Ceremony will be held in Victoria Square/ Tarntanyangga at 4.30pm Thursday to mark the launch of the Fringe’s Reconciliation Action Plan.

The Garden of Unearthly Delights in Rundle Park will also open tonight, with free carnival rides and fairy floss from 7:30pm to 8:30pm.