The Adelaide Crows chairman John Olsen said the Crows will refocus efforts to develop a base at Thebarton Oval, after the South Australian government chose MAB Corporation over the AFL club to remediate and develop the former Brompton Gasworks site.

Treasurer Rob Lucas said the Melbourne-based developer was chosen for the vacant, 5.8 ha former industrial site just north of the CBD due to its “intergenerational” proposal which reduced “the State Government’s liability and therefore the risk to taxpayers”.

Olsen said the Crows remained determined to build “a state-of-the-art training and administration facility which underscores our football-first focus and our unwavering commitment to deliver the type of on-field success we all want.”

Olsen framed the decision as a large commercial property developer coming over the top of Adelaide’s “community-focused” plan.

“We owe it to our Members and supporters to explore these opportunities however we must never jeopardise the Club’s financial sustainability when considering any investment of this magnitude,” he said in a statement on Thursday.

“Our extensive due diligence and multi-criteria assessment has also shown our desired football outcomes could be achieved equally at either site, while our key Member and fan engagement initiatives could be delivered at Thebarton.”

Lucas said that MAB Corporation had won out over the AFL club to remediate and develop the vacant, 5.8 ha former industrial site just north of the CBD with its “intergenerational” proposal “while also reducing the State Government’s liability and therefore the risk to taxpayers”.

The MAB proposal for the site – part of which has been designated a Heritage Quarter – includes a 120 room hotel, piazza, cafes, restaurants and bars: an “integrated commercial and retail offering that will generate unprecedented levels of entertainment, economic activity and social vibrancy”. 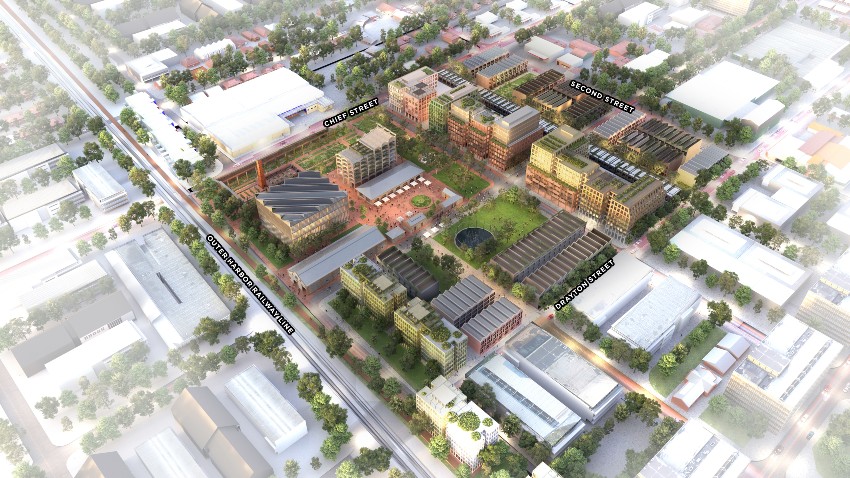 Around 1.5 hectares or 25 per cent of the total site would be set aside for public open space under the plan. Credit: MAB Corporation

The government said there would be 11,500sqm of commercial and retail space featuring an “Employment Hub” and the developer would also restore and reopen former gasworks buildings and tunnels.

MAB Corporation claims its proposal will support an average of 190 South Australian construction jobs per year over the 10 year development cycle, with between 730-1000 ongoing jobs once completed.

The former gasworks site on Chief Street once produced the gas to light Adelaide streets during the 1800s, with its southern end listed as a state heritage place.

It was purchased by the State Government in 2010 and is part of the wider $1 billion Bowden apartment and townhouse development. 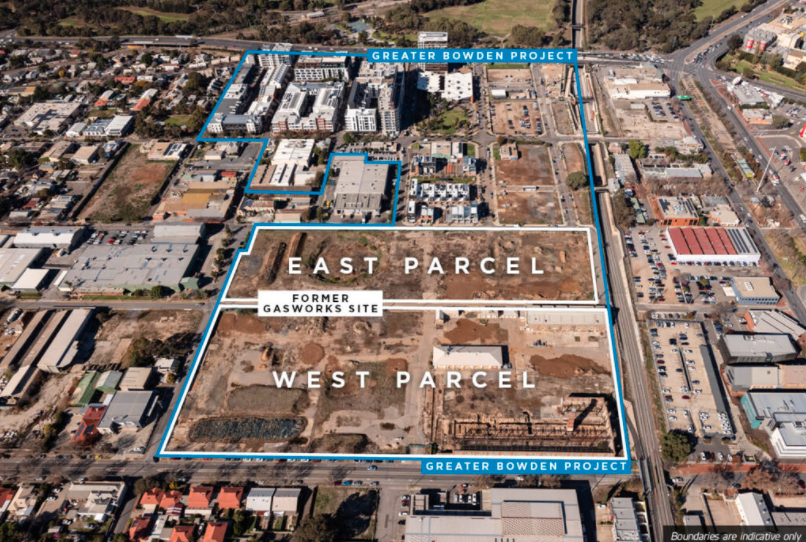 Construction is expected to begin in the second half of 2022.

The Adelaide Football Club was one of four local and interstate bidders short-listed by government agency Renewal SA to develop the site.

The club, which is currently based at West Lakes, has been looking for a home closer to the city since AFL matches moved to Adelaide Oval.

But it later withdrew its bid after suffering an economic hit from the COVID-19 pandemic.

In May last year, the club announced it had joined forces with Melbourne developer Pelligra to pitch a new clubroom, office and housing development for the gasworks site.

At the time, it was reported that the Crows had proposed purchasing the land from the government for a small fee, under the condition that it would cover the costs of remediation and upkeep.

Building its base at Thebarton would put the Crows in a share arrangement of a modern community football precinct with the SANFL and Adelaide Football League. The club would be in a lease arrangement with the City of West Torrens for 42 years (by a 21-year agreement with an extension for another 21 years).

But the Crows are uneasy with the uncertainty on how much land is taken from the site for the South Road tunnels, access to the site during the major road upgrade and how long Kings Reserve, needed for a second training ground, is used as a storage and soil dumping site for roadworks.

Lucas said this afternoon that the final decision on the gasworks site was his.

Lucas said “a lot of (MAB Corporation’s) proposal is based on many of the contaminants being removed from the site, rather than building an oval over the top”.

“I’m sure when they make public statements the Crows will be disappointed with the final decision; I saw no other reasonable decision to make,” he said.

” The Crows obviously indicated they still had two options to consider. The Thebarton option is still open to them. It is up to the Crows to decide their next option.”

Mayor Michael Coxon at the City of West Torrens told Indaily that with the Brompton site out of the running, his understanding was that the Thebarton Oval project would go ahead.

“I understand now that the Brompton site is out of contention that their preferred site is now Thebarton Oval, and we are looking forward to working with them [to redevelop] Thebarton Oval, subject to regulation,” Coxon said.

“Since the Crows’ plans for the Brompton site haven’t worked out, [the City of West Torrens] is determined to provide the Crows with a safe landing at Thebarton Oval. We’re delighted to be working with them to provide a world class football hub, supporting all levels of the code, from the AFL, SANFL, and Adelaide Football League, and most importantly the AFLW. We will hopefully be the home for the AFLW side.”