Australian Education Union state branch president Andrew Gohl told InDaily this morning that of the approximate 1500 teachers, principals and support staff who responded to a survey the union posted yesterday afternoon, the majority wanted South Australia to follow Queensland’s lead by delaying the start of Term 1 by two weeks until February 14.

He said teachers wanted schools and preschools to be given the two weeks to help prepare lessons and ensure sites are COVID-ready before students return.

Term 1 is scheduled to start on January 31, but that date is subject to change due to the flood of COVID-19 cases across the state and concerns about staffing if teachers are forced to isolate if they are infectious or identified as close contacts.

The Queensland Government announced last week that it would delay the start of the school year by two weeks to protect children, staff and families amid a wave of Omicron cases in that state.

But South Australian Premier Steven Marshall has previously said that SA would reach its COVID-19 caseload peak ahead of Queensland – likely in the third or fourth week of this month.

He said a decision about when schools will reopen and in what capacity is likely to be made on Friday following tomorrow’s national cabinet meeting.

Gohl said the union, which is yet to finalise its position on whether to support delaying the start of Term 1, would meet with Department for Education chief executive Rick Perse and Education Minister John Gardner this afternoon to discuss feedback from teachers.

“A delay of two weeks would mean teachers (and) staff are on duty, but nothing else would be going on,” he said.

“The reason for that is to allow work preparation to ensure sites are safe going back, so that… schools and preschools are supplied with all the safety equipment that’s needed – sanitisers and masks – and to provide time for the Department to produce information that people are looking for.

“It would also be time for teachers to prepare if schools go back online.”

The union boss said that while teachers were now adept at online schooling, delaying school by two weeks could bolster the chance of students returning for face-to-face learning.

He said there were “real concerns” that online learning could hinder students’ ability to establish relationships with their peers and teachers at the start of the year, particularly for Reception and Year 7 students who are starting primary and secondary schools for the first time.

“You’ve got your brand-new Reception children coming in, kindies have always got movements of kids, we’ve also got Year 7s who will be in secondary schools for the first time,” he said.

“For a lot of them that’s a new environment and there will be some anxiety that they’ll experience.

“There’s also been a trickle of concern from people saying, ‘we have to do the best thing for our Year 12s’.

“There’s a concern around what impact the start of the school year will have on those groups specifically.”

South Australian Commissioner for Children and Young People Helen Connolly said she encouraged schools to minimise the impact of any pandemic-related conditions on Year 7 students.

She had there had been a “significant build-up and anticipation” around Year 7s starting secondary school for the first time this year and it was important that their experience was as positive as it could be.

“We know school is much more than formal learning and that it is also about life skills, supports and opportunities, so that Year 7s starting the high school journey together as a group is a significant part of setting this cohort up for ongoing success,” she said.

“With all the debates around Omicron and vaccinations and start dates, let’s not forget that from the perspective of children it’s still about the excitement and nervousness of starting high school and that balancing this against decisions made is a priority.”

Gohl said delaying school by two weeks would also “maximise the numbers of vaccinations of five to 11-year-olds before they return to school”.

The vaccine rollout for that cohort started this week, but those within that age bracket will not be fully vaccinated by the time schools return, given the Australian Technical Advisory Group on Immunisation has recommended an eight-week interval between vaccine doses.

There are an estimated 148,253 children aged between five and 11 in South Australia, but as of Monday, only around 52,000 – roughly 35 per cent – were booked in for two vaccine appointments.

Marshall told reporters yesterday that the government had a “major concern” about teacher capacity at schools and preschools once schools resume.

“When they become infected it makes it very, very difficult,” he said. 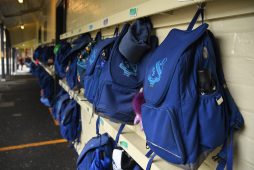 “This is one of the reasons why we’re really pushing that booster program at the moment.”

It comes as the University of South Australia this morning announced that all lectures would be delivered online, with tutorials to also be conducted online where possible.

The university has also mandated the use of facemasks for all on-campus activities unless people have medical exemptions.

“Collectively, these measures afford us a risk minimisation framework for dealing with endemic COVID-19 in our community,” Uni SA Vice-Chancellor Professor David Lloyd wrote in a staff email this morning.