The sensational development was confirmed by Cricket Australia shortly after 11.30am, saying: “SA Health has confirmed that Cummins is a close contact and will be required to isolate for seven days.”

“As a consequence, Cummins is unavailable to play in the second Vodafone men’s Ashes Test match in Adelaide, starting today,” CA said.

Fellow fast bowler Mitchell Starc and spinner Nathan Lyon have been classified as casual COVID contacts after dining at the same restaurant “but at a separate table outdoors”.

“SA Health has deemed them casual contacts and they are free to play,” the statement said.

The dramatic turn of events paves the way for newly-appointed vice-captain Steve Smith to lead the side for the first time since an infamous ball-tampering scandal at Newlands in Cape Town cost him the national captaincy.

Redbacks skipper Travis Head, fresh off a game-defining 152-run knock in Brisbane, will be vice-captain.

Cummins tweeted this afternoon he was “gutted to miss this Test”.

“Super frustrating but COVID has thrown us all some curve balls over the last couple of years – will be cheering along!” he wrote.

The Adelaide Strikers have also released a statement confirming bowler Harry Conway was dining with Cummins last night and “was advised this morning that he came into close contact with a person who received a positive COVID-19 test last night”.

“He has been isolating at home since the potential exposure and has not been in contact with any other members of the community, Strikers players or staff,” the BBL club said.

“Three other Strikers players were separately dining outdoors at the same restaurant in a lower risk setting.

“This group of players have been tested as a matter of precaution.”

The Ashes twist has overshadowed the second Test in Adelaide, delivering a massive blow to Australia’s chances in the match after a dominant performance by the fledgling skipper in his captaincy debut in the first Test in Brisbane.

Speaking to media this afternoon, CA boss Nick Hockley thanked SA Health and the medical staff that had been involved overnight in “working to establish the facts”.

“Throughout the last 18 months we’ve worked really constructively with the health authorities,” he said.

“It is unequivocal that Pat was in the restaurant at the same time as a positive case [and] while it’s extremely disappointing for everyone, it is what is.

“It’s a sign of the times that we’re living in and there really was no option… it’s just such bad luck that Pat’s been caught up in the wrong place at the wrong time.”

He said Cummins was “obviously extremely disappointed, as is the whole squad”.

“But he’s philosophical – he understands this is what SA Health have prescribed and there was no real [alternative] option,” said Hockley.

“We’re just blessed that Steve’s so experienced and ready to step in.”

Premier Steven Marshall, who only hours earlier was promoting the day-night Test as “an event that will inject millions into our economy, support local jobs and give cricket fans something to cheer about”, told reporters shortly before Cricket Australia’s statement was released that “SA Health are working through that with CA at the moment”.

“I only just heard the news about Pat Cummins… this morning,” he said.

“He is of course our captain a great player, but of course SA Health are going to have to work through those issues with Cricket Australia [and] we haven’t got too many hours now until the first bowl [sic] is delivered.” 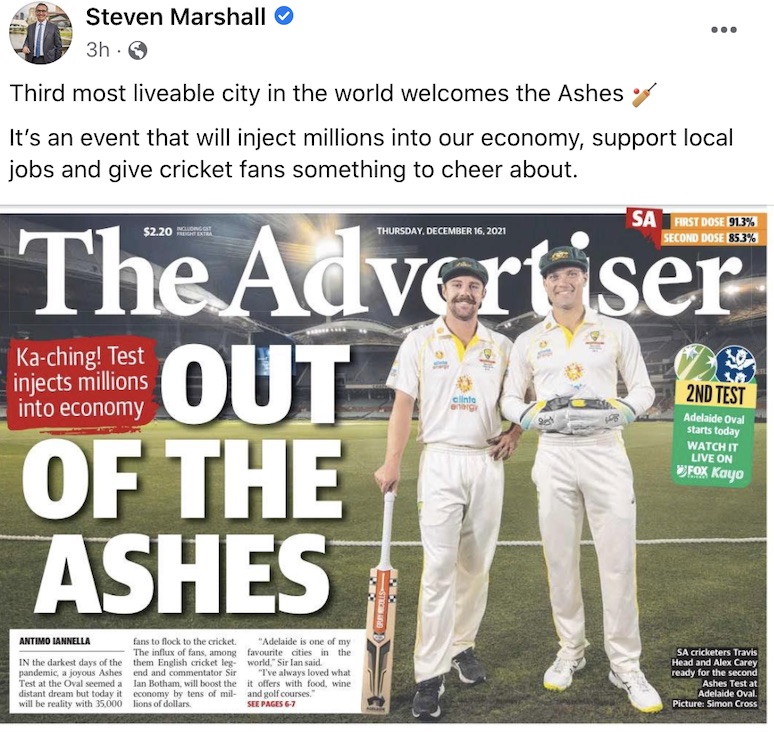 CA said Cummins, who took over the captaincy after former skipper Tim Paine stepped away from the game in the aftermath of a recent sexting scandal, was deemed “a close contact of a person who received a positive COVID-19 test last night”.

“Cummins was dining in a restaurant last night and did not breach any biosecurity protocols,” the statement said.

“He isolated as soon as he became aware of the situation and has since had a PCR test, which produced a negative result.”

He is expected to be available to return for the Boxing Day Test at the MCG in Melbourne.

Queenslander and former Adelaide Strikers paceman Michael Neser has been called up for his Test debut in Cummins’ place.

Gutted to miss this Test but really excited to see Neser finally get his chance in the baggy green. He has done the hard yards and is a seriously skilful player. Super frustrating but COVID has thrown us all some curve balls over the last couple of years. Will be cheering along! 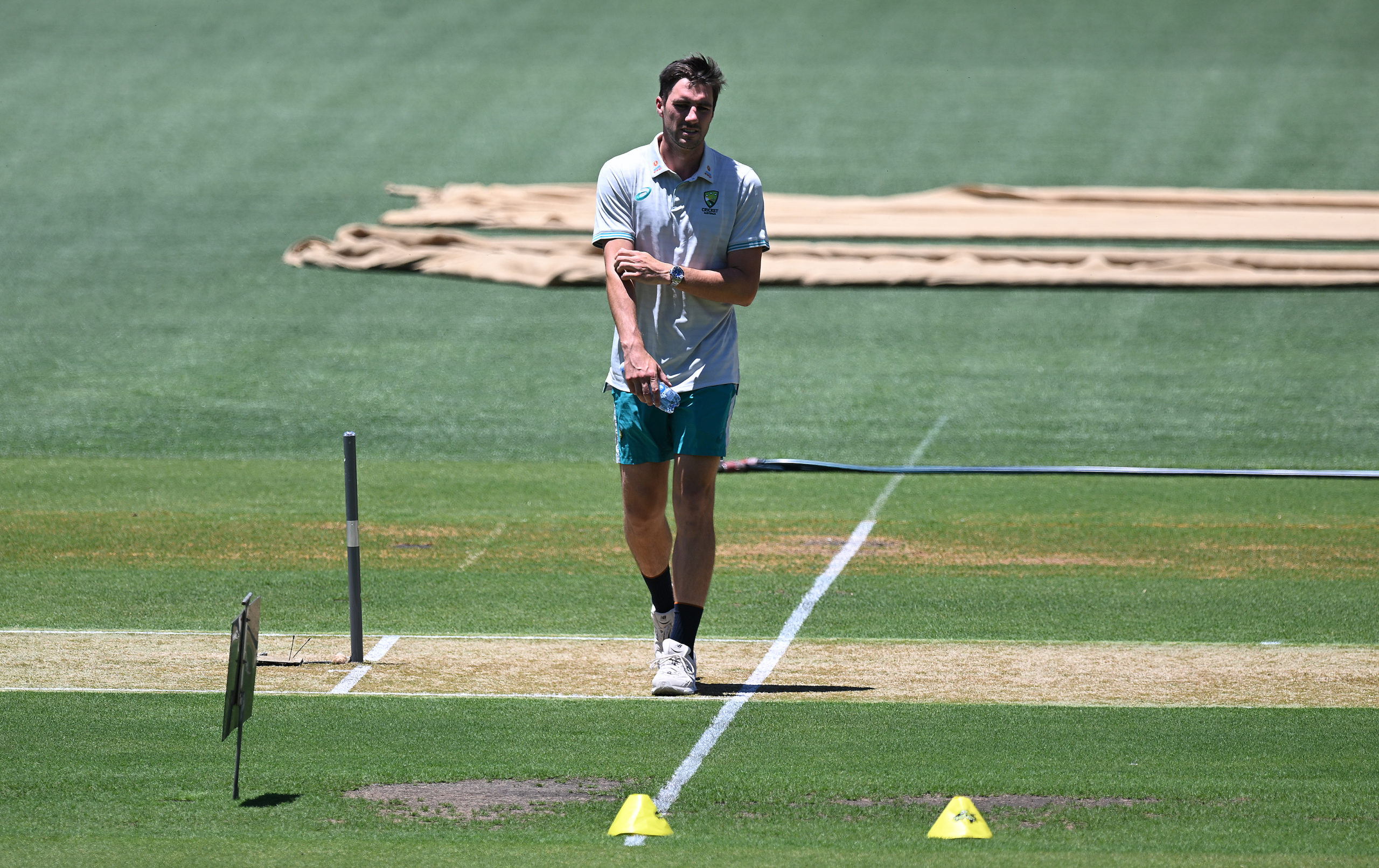 Marshall played down fears of COVID cases spreading from the Adelaide Test, saying “every single person that goes to the Ashes will be fully vaccinated”, and noting the state had recorded “only about 120 [cases] in the last three-and-a-half weeks… so very much at the lower end of predictions when we opened the borders”.

“We know if you’re fully vaccinated in SA, the maximum time you can do [in quarantine] is seven days,” he said.

“We’ve got to learn to live with the coronavirus… so many people are pleased because they’re going to be able to spend time with friends and family at Christmas time.”

He also said SA Health had confirmed “there are no positive cases on the APY Lands” after traces of the virus were detected in wastewater there, while there had been no cases as yet recorded in any aged care facilities after a scare this week with two health care workers who had visited and delivered care to residents testing positive.

SA Health today released a list of new exposure sites around Adelaide, including for last night.