Tourism operators in the state’s south-east say uncertainty over whether the SA border will remain open, combined with new requirements that arrivals must be tested and isolate until a negative test is returned, have seen a spate of cancellations for what should be the start of their most lucrative period.

Robe accommodation house operator Jamie Aitken says he has spoken to other industry insiders and believes they were “collectively down around $150,000 just last weekend”.

That wasn’t helped when a spate of exposure locations in the town were identified, forcing staff into quarantine and prompting a glut of cancelled bookings.

But it’s the cancellations going forward that are of greater concern, with Aitken saying the town’s major caravan park “already had 50 cancellations for January”.

He said “the rules and regulations that are in place for people wanting to come over here” had become a major disincentive to travel, with Robe often a stopover location for travellers heading to Adelaide.

“If they have to isolate when they get here, they can’t do anything… it’s a very bad rule,” he said.

“If they’ve got to have a test 72 hours before they get to the border, surely that’s enough – you shouldn’t have to lock up again.”

Aitken said tourism, along with fishery, is “what keeps this place afloat” and “we rely on the period from Boxing Day to Easter for over 60 per cent of our revenue for the whole year”.

He said Robe had also been wrongly stigmatised after a visiting Victorian who later tested positive visited a number of venues identified as exposure sites.

“We’ve had a number of cases coming to Robe being told at the border by uniformed people ‘don’t go to Robe – it’s a red zone’,” he said.

“One guest rang me in tears, she was coming here for her honeymoon and was told it was a red zone, and to turn around and go back to Melbourne.”

He said a fellow tourism operator was shopping in Mount Gambier wearing her business’s signage and was told “you can’t come here, get out – we’re not serving anyone from Robe”.

“There’s great confusion at the border as to what was going on,” he said.

Geoff Prest, co-owner of the Caledonian Inn at Robe – which was named as a close contact exposure site last week – said his business had since lost 10 accommodation bookings worth $8000.

“It’s not just the bookings we’ve lost, we’re not getting any new bookings either and we are normally pretty full at this time of year,” he said.

“At the moment this Government is going to sink all traders in Robe which is going to have a massive effect on the whole town, if the Government doesn’t get the message out that Robe is a safe place to come…

“It’s outrageous that Robe is being linked to being an unsafe destination because we had a COVID case.

“I think there’s really got to be a bit of clarity as to what the nation being vaccinated actually means.

“People want that clarity from the Government about what is going on here – are borders open or shut, there are so many knee-jerk reactions.”

He said it was “also the fact that things keep changing every day and you can’t plan”.

“No-one is planning a holiday to come to Robe at the moment because things might change,” he said.

He said dining and bar trade turnover was also 30 to 40 per cent down.

Local Liberal MP for Mackillop Nick McBride said since borders reopened and the exposure locations were listed “it’s all been a battle” for Robe businesses.

“I’m hearing from these businesspeople that bookings in January have been canned because people won’t risk what’s going on in December.”

McBride said while the border had reopened in November it was “only slightly ajar… because it’s a very cumbersome, difficult process to navigate through”.

“All authorities – government, SA Health, SAPOL – knew there’d be some leakage of COVID [but] the ramifications of that I don’t think were fully understood by those coming in,” he said.

“We have people saying ‘we’re not spending money to be locked in our accommodation because there’s been an outbreak’.”

He said he was giving Premier Steven Marshall a message to have “confidence to keep pursuing the borders being opened by Christmas”, arguing “we’ve opened the borders with a very restricted type of methodology” that needs to change.

Despite health advice that borders should close because of fears of the new Omicron variant, McBride said: “I would need good evidence that this variant needed to be locked out and managed any more than any other variant.”

“I know SA Health have had a very precautionary, risk-avoidance approach to this – hence why SA has been fortunate and lucky – but if we’re going to continue to worry about every new variant, we’ve got a difficult future in front of us,” he said.

“That’s then going to be no good for our future recovery.

“I don’t see any evidence that we should hold back because of the new variant.”

His views were echoed by fellow south-east MP for Mount Gambier Troy Bell, who said businesses were in a worse position now than before the borders reopened.

“I want them to stay open, but have that assurance that we’re not going to close them – this is the route we’ve chosen.” 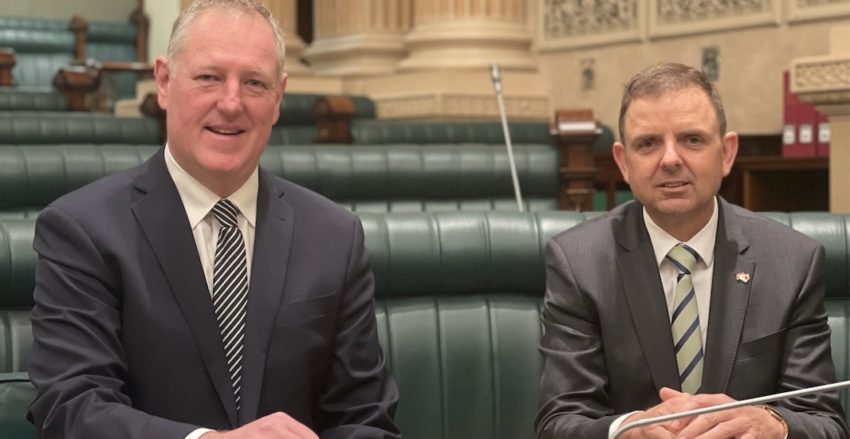 MPs Troy Bell and Nick McBride have had an influx of complaints from concerned businesses.

He said the “uncertainty” caused by the Government “saying they’re open for now” has prompted “massive cancellations” in his region.

“Grant Stevens coming out and saying ‘borders are open for now, but we’ll wait and see’ – that’s creating the uncertainty,” Bell said.

“The next thing is the test requirements – people are visiting and they’ve got nowhere to isolate till they get a negative test come back.”

He said the problem was exacerbated by “three to four hour waits at testing station at Mount Gambier showground, because there’s an increased demand but no increased capacity”.

The net result, says Bell, is prospective visitors “just staying where they are”.

“Families are very upset they’re not going to be reunited for Christmas [but] the worrying thing is the number of accommodation cancellations,” he said, noting an “avalanche” of calls coming into his office.

“The phones are ringing and we just can’t take the volume that’s coming in,” he said.

“I’ve not seen this level of complaint coming into my office in the last 20 months.”