The two suspected cases of local transmission are both vaccinated men in their 50s who attended the same event as interstate travellers.

“While the cases are currently under investigation, we believe the virus was passed on from an interstate traveller at the event,”  SA Health said in a statement this afternoon.

A spokesperson for SA Health advised InDaily it was a “private function event.”

SA Health on Wednesday evening identified two close contact sites. One relates to patrons at Theatre Bugs at Norwood on Saturday the 27th of November 2:00pm to Sunday the 28th of November at 2:00am.

The second relates to attendees of an induction night on Level 1 at a Business SA event at Unley on Tuesday the 30th of November, from 5:30pm to 8:00pm.

In a statement a spokesperson for Business SA advised InDaily that a fully vaccinated event guest has tested positive to COVID-19.

“Following the notification by SA Health and in an abundance of caution, the CEO Martin Haese, has asked that all Business SA staff get COVID tested,” the spokesperson said.

SA Health also identified a casual contact exposure location in Glenelg at Cardone’s Seafood & Grill on Friday the 26th of November from 7:00pm to 9:30pm.

Former Premier Jay Weatherill has been caught up in the COVID scare, after attending a reunion event on Saturday in Norwood.

Weatherill confirmed to InDaily he attended an event where suspected transmission of COVID occurred.

Weatherill was photographed on the Monday after the event in the company of Opposition Leader Peter Malinauskas and former Deputy Premier John Rau. 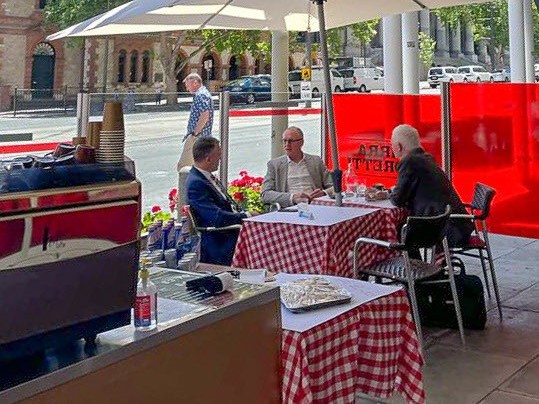 Under new SA Health guidelines, “close contacts” of people who attended an exposure site do not have to quarantine unless they becomes infectious.

It means anyone Weatherill — who is not believed to be one of the two persons to test positive — came into contact with afterwards does not have to quarantine at this stage.

“The Opposition Leader will of course comply with any SA Health direction,” a Labor spokesperson told InDaily.

A third case was recorded in an unvaccinated child who acquired her infection overseas and has been in quarantine since arrival.

If confirmed, the two cases at the event would represent the first locally acquired cases detected since South Australia reopened its border to the eastern states on November 23.

South Australia’s transition committee on Tuesday opted against making any changes to the state’s open borders with NSW, Victoria and the ACT, although police commissioner and state emergency coordinator Grant Stevens warned travellers to “be flexible” in case circumstances change, highlighting uncertainty around the new Omicron variant.

“My takeaway at the moment is clearly we’re dealing with a new variant which has been designated a variant of concern,” he told reporters after the meeting.

“But there’s a lot more information that is required before we can really assess the impact it’s going to have in terms of how we manage the pandemic going forward.”

Stevens said he was “pleasantly surprised” by the volume of people coming into South Australia since the borders reopened.

He said more than 100,000 people have accessed the state’s border application program, EntryCheck SA, and the site is “standing up to that sort of pressure”.