The app is supposed to prompt new arrivals from higher-risk regions to follow a schedule of symptom checks, COVID tests, and randomised check-ins using facial recognition to prove they are at their approved quarantine address.

The average rating of the app in both stores is over 4.5 out of five stars, with one star the minimum score that can be given. Multiple reviewers noted they would have given a zero star rating if the option was available.

Most reviews reported problems with the app failing to text through a unique ID code needed to access it.

Other new arrivals noted constant dropouts and errors, repeated facial recognition failures, and flashing lights they feared could cause issues for people with epilepsy.

An unclear age input field confused numerous users into scrolling back month-by-month hundreds of times to enter their date of birth.

“Can’t enter date of birth …  there’s no option to change the year! I’m not in SA long enough to scroll back 50 plus years month-by-month. Fail,” wrote user Matt Griggs.

“The face recognition worked immediately possibly six times out of 30. A pain to use,” wrote user Kel Grey. 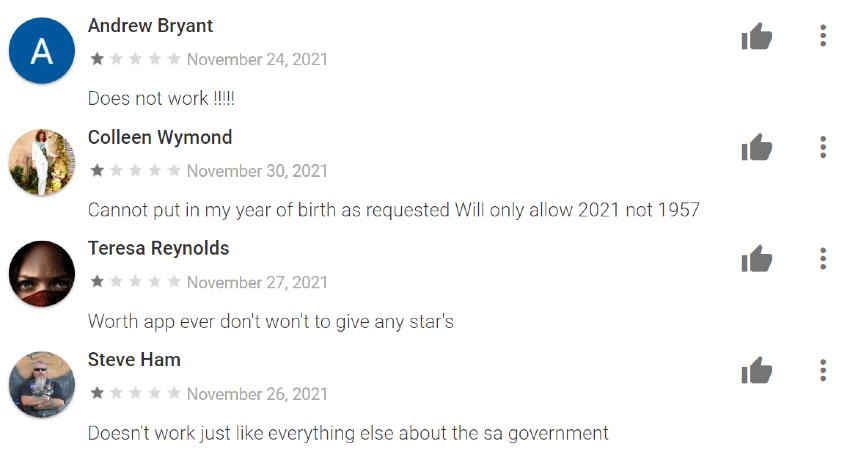 Reviews of the HealthCheck SA app average less than 1.5 out of five stars

“Useless. Does not work. Does not deserve any stars but was forced to give one star to post review. Wasted [hours] trying to set up account. Does not give you any option [to] enter mobile number to get an SMS with ID number,” wrote user Michael Dielenberg, who said he flies to South Australia every week from Queensland to work.

When InDaily installed and attempted to log into the app, a notification claimed a unique ID code had been sent, but none was received.

A Department of Premier and Cabinet spokesperson advised InDaily this message would only be sent to users who have applied to travel.

The spokesperson also advised that Dielenberg was approved to enter the state without needing the app.

A helpline for issues is included in the unique ID text, but as it never arrives for many users they don’t know who to call for technical support.

“The Marshall Government needs to be immediately investing the resources needed to fix the bungles in the app,” he said.

“People are clearly signalling their concerns that these ‘technical difficulties’ could end up with them being at risk of doing the wrong thing … people are stuck in an endless cycle of phoning a hotline without the resources or information to help, then phoning the Health Minister’s office, only to be referred to the hotline again.”

User Delgattie wrote that they felt stressed they would be fined for failing to do mandatory daily symptom checks, as the phone did not allow it.

“One of the worst apps and service I’ve had to use,” Delgattie wrote. “The app set up doesn’t work. Spent three hours on phone yesterday and told to uninstall and reinstall to fix it. That didn’t work. Have been trying to phone SA Health for five hours today to get help as meant to do daily symptom check. Everytime it goes to option selection on [the] phone, the call is disconnected.”

Several struggled to find the app on their phone after it was downloaded, as it is called “HealthCheck SA” in the app store and “Home Quarantine” on the phone.

The app was renamed after being used in home quarantine trials prior to the border reopening.

“I’m an app developer and I’d get fired for rubbish like this,” wrote user David Gwynn-Jones.

A spokesperson for the Department of Premier and Cabinet told InDaily the app has “been successfully used by many thousands of people returning to and visiting South Australia.”

“Built by the South Australian Government, HealthCheck SA uses innovative geolocation and live face verification technology which can be used by people of any age, ethnicity, gender or cognitive ability,” the spokesperson added.

The complaints follow concerns about the complexity of digital platforms arrivals to South Australia need to navigate, and vulnerabilities identified in the proof-of-vaccine check-in system.