InDaily revealed yesterday that SA Health had put out a tender asking for expressions of interest for the management of 100-resident quarantine facilities in the four regions due to concerns vulnerable and Indigenous people will be unable to quarantine at home during a COVID-19 outbreak.

Despite the procurement document being published on Monday, the “mandatory criteria” for the successful tenderer is an “ability to mobilise on or before 10 December 2021”.

“Sites will be available from dates still to be determined, with a preference from 30 November to 30 June,” the document states.

Applications for the tender close on Friday, with final enquires from organisations expected by 2pm today.

Chief public health officer Nicola Spurrier this morning defended the short timeframe for procurement, saying it is “just one small part of this whole process of working with our community”.

“We have done an enormous amount of planning here over the pandemic,” she told ABC Radio this morning.

“We haven’t been sitting around fiddling our thumbs.

“I’ve gone around the state with some of my team looking at some of the options, so this is going out to tender to invite people who we already don’t know about to come forward and put in an application, because we need to have a procurement process.”

Asked why the tender was only released on Monday, Spurrier said: “I think this is appropriate timing.”

“We have not got an outbreak here in our state at the moment, just because you open the border on the 23rd does not mean that you get an outbreak the next day,” she said.

“We’ve already spoken to a large number of people that provide these sorts of facilities, we already have scoped out where they may be, but we need to go through a formal tender process as part of a procurement.

“I don’t believe it’s been left too late.”

“We’ve had 20 months to prepare for this moment, we always knew there’d be a point in time where our borders would have to open and COVID would have to come into South Australia,” he told reporters this morning.

“At the very time we’re about to have COVID come into our state, the tender’s been issued – surely this should have been done a long long time ago.”

InDaily contacted Health Minister Stephen Wade for comment but did not receive a response before deadline.

SA Health has no details on the cost of the sites, with costs to be worked out during the procurement process.

InDaily asked SA Health whether they have formally identified or secured any sites in the four regional towns, and who would be supplying the “cabins” at the quarantine facilities, but did not receive a response.

It comes amid ongoing concern about Aboriginal vaccination rates in South Australia, with the state’s Indigenous rate around 30 points behind the statewide average.

As of last Tuesday, just 34.1 per cent of Aboriginal people in Port Lincoln are fully vaccinated, according to the lastest federal government figures.

The other proposed quarantine sites also have lagging Aboriginal vaccinations rates, with Port Augusta (42.1 per cent), Mount Gambier (50.9 per cent) and Renmark (51.3) well behind the statewide average.

AMA President Dr Michelle Atchison said the regional quarantine plan “points to a failing of vaccination rates and provision for these communities”.

She also said, “to tender and ask for [the facilities] to be in place by 10th December is shocking”.

“Where was the planning? I can only imagine the only way this can be done is by taking over caravan parks at a time when we are trying to encourage the rebirth of tourism,” Atchison said.

The tender specifically refers to “cabins”, “camp services” and mandatory 14-day quarantine periods for residents, as opposed to the seven days of quarantine required for vaccinated close contacts.

Renmark Paringa Mayor Neil Martinson said he wasn’t aware of any locations that could host more than 100 residents other than the Paringa quarantine camp set up for seasonal workers in March.

“I have no idea who would tender for it, whether it would be the Paringa resort again I’m not too sure,” he said.

“But I don’t’ know any other locations where’d they’d be able to do that.

He added that “obviously the community would be concerned of COVID getting out, but all we can do is work on the directions of SA Health.”

Port Lincoln Mayor Brad Flaherty said he had discussions with SA Health around three weeks ago about the use of hotels as a “contingency”.

“The last discussions I had with SA Health they were talking about trying to gain accommodations in hotels as contingency if they could,” he said.

Asked whether there were any facilities in Port Lincoln that could hold 100 residents or more, Flaherty said the town’s caravan parks might suffice but there’s “been no discussion at all about temporary campsites or anything like that”.

A spokesperson for the City of Mount Gambier said they have received no official notification from SA Health about any plans for quarantine facilities and could not comment. 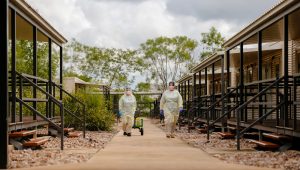 “There’s no leftover GPs or nurses that are currently in rural areas that would be able to manage the health services to look after these people,” he said.

“They’d have to work out where that workforce came from because I don’t believe there’s the capacity for the current system.

“We’re still really in the dark as to what’s going to happen as we get more COVID patients, especially in rural South Australia.”