Ambulances were lined up outside the hospital about 8pm last night, with the paramedics’ union tweeting a photo, saying six vehicles were ramped at one point, leaving some children waiting for more than an hour.

Doctors have described the situation as “shocking” and say children should not be stalled outside the emergency department because they can deteriorate quickly.

The doctors’ union was called in by concerned clinicians to conduct an inspection of the overcrowded ED and report to SafeWork SA and hospital management.

Australian Medical Association state president Dr Michelle Atchison told InDaily it was “ a new development in the worsening of ramping in South Australia” to have children now parked outside the ED.

Health authorities have previously insisted ramping does not occur at the Women’s and Children’s Hospital, although doctors have reported isolated cases of vehicles waiting outside.

What does occur more commonly at the WCH is “internal ramping”, where paramedics wait with patients inside the ED.

“It just absolutely increases our concern about how the hospital system is coping at the moment and it speaks to it not just happening in adult acute hospitals but now in the Women’s and Children’s,” Atchison said.

“The issue medically is that children get sick very quickly and can deteriorate very quickly.

“So for them not to be actually within the hospital itself is a very concerning development in how the Women’s and Children’s Hospital is managing at the moment.

“They’re going to be the COVID centre for children. If they can’t manage the burden of health that they’ve got at the moment, how are they going to be able to manage sick children with COVID?”

Atchison said “we’ve jumped too early with opening up the borders and COVID will be with us soon”.

“The AMA has very real concerns about how the hospital system will cope,” she said.

This photo was taken at 8pm tonight at the Womens and Childrens Hospital with 6 ramped ambulances. Children should not be ramped – tonight some were forced to ramp for over an hour. Our kids are being harmed and our clinicians suffering burnout. #TimeToCare #stopramping #saparli https://t.co/furaBKCOMi pic.twitter.com/qd8vaEuu9x

He said it was “extremely rare” for external ramping to occur at the WCH and this was the worst he’d ever seen.

“What’s concerning is we are now seeing children being ramped because of extreme pressure on our health network,” he said.

“Children should not be ramped – it’s inappropriate.

“Paramedics do their best but they’re not trained to be paediatric nurses or doctors.

“Our worry is that we are extremely unprepared for COVID and one of our biggest concerns is that children under 12 can’t yet get vaccinated.”

SA Salaried Medical Officers Association chief industrial officer Bernadette Mulholland was “appalled” by the overcrowding she saw in the ED last night when she was called in to inspect.

She said at its peak between 8pm and 9pm there were 70 patients in the ED, with 30 still waiting to be seen.

“It just made me feel sick,” she said.

Doctors had asked for ambulances to be diverted to other hospitals but Mulholland said “that was refused by hospital executives because they could see… all the other hospitals were also overloaded”.

She said all hospital EDs were above capacity, at “code white”, for the second night in a row, while the SA Ambulance Service had also again declared an “OPSTAT Red” event, signalling levels of demand having an impact on paramedics being able to deliver “safe” services.

Mulholland said next time she was called in to inspect during overcrowding she would ask Premier Steven Marshall and Health Minister Stephen Wade to attend “so they can see for themselves how bad it is”.

She said doctors were “really worried about the level of preparedness for COVID”.

“If this is the situation that we’re seeing in our hospitals now… and we continue to see those presenting numbers plus COVID positive patient numbers in that particular ED then we are in for a really rough trot and it will inevitably end in crises sooner or later if it’s not addressed,” she said.

“No child should be forced to ramp outside a hospital for more than an hour,” he said.

“If we cannot provide a health system which looks after our children, then something is horribly wrong.

“There is no excuse for this.”

In a statement, a spokesperson for the Women’s and Children’s Health Network said the hospital was “busier than usual last night, with a significant amount of paediatric (ambulance) presentations received in a very short period”.

“Additional staff, including doctors, were brought in to support the late and night shift to improve the flow of patients though the PED (paediatric emergency department),” the spokesperson said.

The hospital said of the 33 children brought in by ambulance, only one patient was seen “ten minutes beyond clinically appropriate timeline”.

“Children and parents in non-life-threatening situations can be advised to use the Child and Adolescent Virtual Care Service to avoid hospital and receive medical advice in their home,” the spokesperson said.

“This service is staffed by highly skilled paediatric emergency nurses and doctors who will assess the child and provide advice or referral to an appropriate service for ongoing care.”

Premier Steven Marshall this afternoon told reporters “any ramping or any delayed service is unacceptable and we need to work on that but that’s precisely what we’re doing with a very significant increase to funding for health in South Australia and bed capacity.”

A State Government spokesperson said “we have seen encouraging improvement with regards to hospital pressure in recent weeks, but we will continue to see surges in demand from time to time”.

“Labor are determined to undermine the state’s public health response at every opportunity, but we are getting on with delivering our COVID-ready plan to keep the community safe and our economy strong in the months ahead,” the spokesperson said.

“The Marshall Liberal Government’s response to this pandemic has been the envy of the world.

“Just as our state has been well served throughout the pandemic by listening to the expert health advice, South Australians can be assured that the state’s health system is COVID-ready.”

“We are recruiting up to 1920 health staff to ensure South Australians have the care they need, when they need it,” the spokesperson said.

“At the Women’s and Children’s Hospital, families are benefiting from the establishment of the Child and Adolescent Virtual Care Service.

“The Service has provided care to 670 patients, with the vast majority of these not requiring to present to the emergency department.” 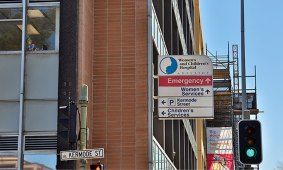 A spokesperson for the SA Ambulance Service (SAAS) said the hospital experienced an increase in presentations yesterday.

“So that hospital teams could provide the very best care to those who immediately needed it, SAAS experienced slightly lengthier transfer of care times for a small number of patients,” the spokesperson said.

“The impact on SAAS was short-lived, with the WCH working quickly to resolve the issue.

“Earlier this month, SAAS commenced use of the WCH Virtual Urgent Care Service for paediatric patients.

“We’ve referred children who would have otherwise needed to go to the emergency department.

“This new measure, which is also available for parents and carers to access directly, is one of many game-changing initiatives currently addressing hospital demand across Adelaide.”

SAAS said yesterday’s average wait time for children arriving at the hospital was just over 25 minutes.