In an extraordinary afternoon of evidence in the ongoing inquiry into Chapman’s decision as Planning Minister to veto the $40 million port proposal, Tony Braxton-Smith claimed to have a “flaky memory”, little experience in the Planning portfolio he once oversaw, no knowledge of the state’s ministerial code of conduct – which he was “surprised” to learn even existed – and considered conflicts of interest an “administrative detail”.

He also expressed “dismay” that his assessment report recommending the project was knocked back by Chapman, saying he believed he had “failed in my task”, but arguing that “Kangaroo Island needed economic development and diversification in its economy”.

Braxton-Smith, who led the former Department of Planning, Transport and Infrastructure from late 2018 till mid-2020, when a restructure saw Planning moved to the Attorney-General’s department, told the committee he did not “have any technical expertise or subject matter expertise in that [planning] field”.

“That was freely acknowledged and abundantly apparent when I applied for the job… I have never had responsibility for a planning function,” he said.

Nonetheless, he authored an assessment report for the doomed port project that was rejected by Chapman after she took over the Planning portfolio in 2020, requesting instead another round of assessments.

Braxton-Smith told the inquiry he “did wonder on the basis for the rejection of the assessment report”.

“We had put many months of effort into it and I thought we had done the job, and I was a bit dismayed that I hadn’t done a better job,” he said.

“It was very complex in terms of an assessment, and I had done my best to think carefully about it and thought that I had addressed adequately the various considerations.”

He said senior Planning bureaucrats had referred to the decision being “finely balanced” but “I got to a point where I thought we needed to make a clear recommendation notwithstanding the fact that it was finely balanced”.

However, “the Planning Minister [Chapman] was disappointed with what was presented, which is kind of like getting a ‘D’ on your school essay that you have been working hard on for months”, he said.

This prompted Labor member Tom Koutsantonis to brand his answer “courageous”, saying: “It seems to me that you and your agency put a lot of hard work and effort into getting the assessment report completed.”

“I have a sense that you actually thought this development would have been good for the island or good for South Australia. Is that a fair characterisation or is it simply the work that you had put into the project?” he asked.

“In undertaking the assessment, I was conscious of the fact that there was a plan for Kangaroo Island that had put forward, that Kangaroo Island needed economic development and diversification in its economy, which was one of the things that weighed in my mind when I was working through the detail.”

He noted that the assessment showed there were “a number of risks there and it had always been finely balanced”.

“The [Planning] team used the expression repeatedly, ‘finely balanced’ – I shy away from that,” he said.

“Perhaps because I am not from government, I prefer to give clear advice as to an option at times or alternative options to let those who are the decision-makers know what my assessment is, but it brings with it the disappointment – which is a learning experience – of having decisions go in a different direction.”

“My immediate disappointment was that I had put in what I thought was a fair effort to make the submission.

“As a newcomer to assessment and to Planning, I thought I had done a reasonable job and I was disappointed to find that there were in fact gaps and that when the decision-maker [Chapman] looked at my work she had found it wanting.

“But I entirely accept, as I said to you, that that happens.”

Asked if he believed his assessment report and recommendation was “wanting”, Braxton-Smith said it was “clear, on reading back, that there were a number of ‘reserve matters’, where we proposed to reserve matters and there were going to be a number of impacts, particularly around the fauna that troubled me and the existing [abalone] business in Yumbah… [but] to a degree my view was formed on the basis that someone 30 years ago decided that there should be a timber industry on Kangaroo Island and if you are going to grow timber on an island then clearly you have to get it off the island, so you need a port to do that.”

“I guess that was kind of more my logic and I was mindful of the economic opportunity,” he said. 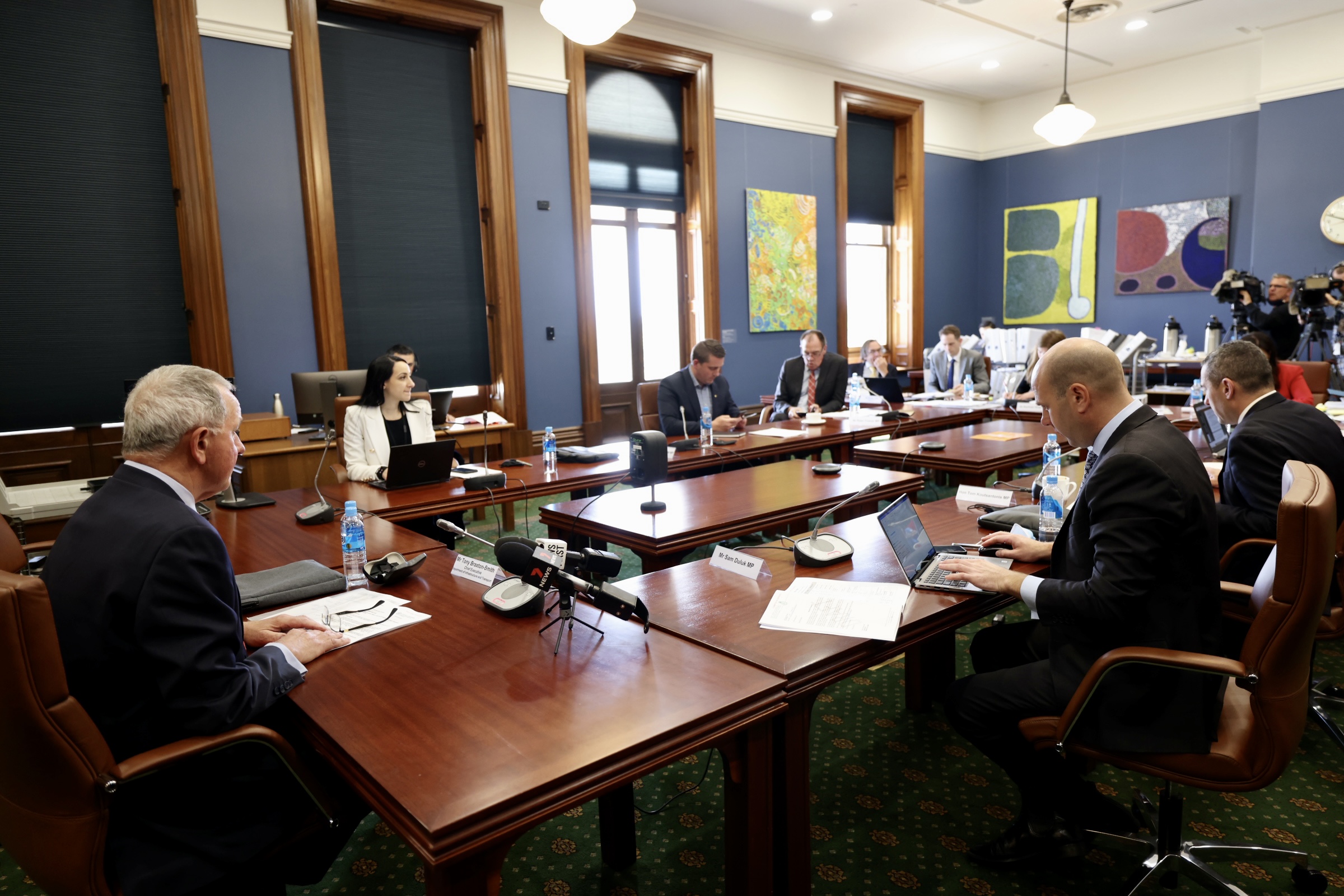 Asked whether he was aware a minute he signed to the minister relating to a delegation of her authority in the port decision to Human Services Minister Michelle Lensink was “related to a conflict of interest”, Braxton-Smith replied: “I seriously cannot recall.”

Former Planning Commission chair Michael Lennon told the committee in earlier evidence yesterday he had spoken about the potential perceived conflict with Braxton-Smith, but the Transport boss said: “I don’t recall the conversation… but please jog my memory.”

“I don’t doubt that Mr Lennon will have a different recall of conversations between him and me than I might have because I’ve got a flaky memory,” he said.

“So, there may have been a conversation at some point in time, but I do not recall it…

“As I said, my memory is incomplete. I may not have been paying attention. I don’t know in what context this is being discussed.”

Braxton-Smith said he signed the minute, despite being unclear what it referred to and not having read all the attachments, because it was “not relevant to the job that I was given [which] was to complete an assessment report and submit it”.

“I do not go over and give consideration to everything that gets signed through personally,” he said.

“I work for a large organisation with delegations, with others that have responsibilities for certain things.

“You may take a different view and you might think I’m foolish… or suggest that I’m somehow deficient in my approach to this but, on this particular matter, I didn’t turn my mind to it.

Braxton-Smith said he had not read the Ministerial Code of Conduct, adding: “In fact, you surprise me in saying there is one.”

“It is obviously not a code of conduct towards public servants,” he said.

“I am relatively new to government – I’m not steeped in the history and tradition of it,” said Braxton-Smith, who came to the SA Government after seven years at the NSW Transport department.

“I’ve been chief executive here for three years, which I guess is now a reasonable period of time, but I don’t have a deep and detailed knowledge of what ministers’ obligations are.

“I would expect that they do, so the questions that you’re asking me are probably better directed to a minister.”

“I don’t know if they are the same as they are on me or different to me,” he said.

The inquiry’s counsel assisting, Dr Rachael Gray QC, suggesting to him “that as a chief executive advising ministers, it’s something you should be familiar with”.

My mum used to say, ‘Don’t teach your grandma how to suck eggs’… It feels to me like you are suggesting to me that I ought to have done that

“I am pleased to have your advice… as to where else I might go to to further my development as a chief executive,” he said.

“So, for me, it is a matter of administrative detail, where I will check carefully to think about interactions that I have or interests that I have that might be perceived as a conflict of interest in a number of important matters that I deal with.

“I treat it as administrative detail because it is to do with the process and not the substance of matter I am dealing with.”

He said of the question as to whether Chapman had a conflict: “I consider that entirely a matter for her.”

“In relation to your line of questioning, in effect you are asking me if I should be providing advice to the state’s chief law officer on the law as it relates to conflict of interest,” he said.

“My mum used to say, ‘Don’t teach your grandma how to suck eggs.’ It feels to me like you are suggesting to me that I ought to have done that.”