Commercial & General CEO Trevor Cooke told InDaily that construction on the residential, retail and office building at 88 O’Connell Street would begin on April 4, with building work to take up to three years, weather permitting.

But he said his Adelaide-based development company was “at the hands of other parties” as it waits until late January to come before the Environment Resources and Development Court faced with a legal challenge lodged by a group of North Adelaide residents.

“We want to start building on the 4th of April – that’s our determination, that’s sort of driving a lot of our processes,” Cooke said.

“We’ve got to give the market certainty, we want to give our purchasers certainty and the community certainty.”

The group of residents who oppose the development – called Vital North Adelaide and represented by lawyer and former deputy lord mayor Mark Hamilton – announced in August that they would challenge the State Commission Assessment Panel’s (SCAP’s) development approval in the courts.

The residents argue the development, which at its highest point would reach 15-storeys, exceeds the eight-storey limit originally set by the Adelaide City Council and is non-compliant with North Adelaide’s heritage conservation zone.

In response, Commercial & General earlier this month filed a second development application with the state’s planning authority seeking approval under the new planning and design code.

Cooke said while he believed the court case had “very little prospect of success”, lodging a second application at a cost borne by Commercial & General would “give everybody the certainty that they need”.

“Anybody who’s had the unfortunate circumstances of being in a court process knows there is always a dimension of risk,” he said.

“We just don’t control the outcome, so… we said to ourselves, ‘what else can we do in order to minimise the planning risk on this project?’

“The obvious answer was to lodge for a second planning application under the new code.”

Cooke said the earliest the court could hear the matter was in late January and it could take “months” before a judgement was handed down.

“We know that that could be April,” he said.

“Although it’s a very low risk, we can’t close out that risk for an extended period of time because we’re at the hands of other parties.

“SCAP, we expect, will make a determination hopefully this side of Christmas and if not certainly very early on in the new year.

“We will gain four months by running the second application.”

Commercial & General says it has written to North Adelaide residents informing them of its decision to lodge a second development application.

The public will have the opportunity to submit feedback on the application as part of the SCAP process.

Cooke said while the second development application shows a one-storey increase in the height of the towers, the building’s size would remain the same.

“The lift shaft protrudes over the roof and what our architects have done is put a little shade over that so if there’s any fire or emergency exit and they need access, somebody working on that will have a little shade on top of them,” he said.

Of the 2500 registrations of interest Commercial & General says it has so far received from interested apartment buyers, over 70 per cent are North Adelaide or city residents.

Cooke said most of the interest came from prospective owner-occupiers, rather than investors.

“This is very much a project driven by local community interest,” he said.

“We haven’t even appointed interstate agents at this point.”

Meanwhile, the Adelaide City Council is progressing with plans to sell the city beach volleyball site on the corner of Pirie and Frome Streets. 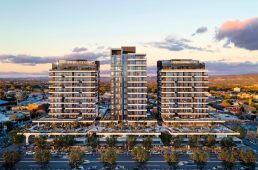 'Strong sales' for redeveloped Le Cornu site ahead of construction

The council is currently assessing proposals from interested developers after its expressions of interest process closed on September 30.

It wants the redevelopment to include “innovative commercial space” such as offices for “advanced economy businesses” and start-ups, “quality housing opportunities appealing to a broader market”, shops and open green space.

The council’s city shaping director Tom McCready told InDaily that the council was pleased with the interest received.

“An announcement will be made once Council has considered the submissions and secured the selected proponent,” he said.

Cooke, who is also on the board of housing and community services organisation Junction Australia, said he wasn’t aware that Commercial & General had submitted a proposal to purchase site, but he thought it would make “a great location for affordable housing”.

“There is a need for particularly young – (aged) under 35 – people who are inner-city workers who don’t access to affordable accommodation, particularly rental,” he said.