Doherty Institute epidemiology director Professor Jodie McVernon told parliament’s COVID-19 Response Committee this morning that her institute was never contracted by the State Government to produce modelling on the expected spike in COVID cases once South Australia reopens its borders.

That is despite authorities including Premier Steven Marshall and Health Minister Stephen Wade previously saying they were waiting for Doherty Institute modelling to underpin the state’s reopening roadmap.

McVernon said the modelling, which was publicly released on Monday, was instead produced by University of Adelaide researchers Professor Joshua Ross from Adelaide’s School of Mathematical Sciences and Dr Thomas Prowse from the School of Biological Sciences.

She said the researchers are part of the Doherty Institute “consortium”, but undertook the South Australian modelling in their roles at the university.

“I have no direct contractual relationships with SA Health and I’m aware that in the media and in discussions that there is this blurring of what is Doherty-led and what is being led from the University of Adelaide,” she said.

“(Ross) is part of the consortium, but that doesn’t mean that all of the work that he does is necessarily officially our consortium’s work.

“It doesn’t mean we’re distancing ourselves from him, but the contractual relationships are distinct.”

Asked by the committee’s chair Tammy Franks MLC whether it was “misleading” to suggest the modelling came from the Doherty Institute, McVernon responded: “Yes”.

“I gather it has been misrepresented,” she said.

“Josh has been quite frustrated by that and expressed that to me, so I’m aware.

“He’s apologised to me in case that’s a misrepresentation of me, but we can’t unfortunately control all that public reporting.”

McVernon said the Doherty Institute led “weekly situational assessment reporting” that is delivered to the Australian Health Protection Principal Committee and subsequently referred to all states and territories, but it had not undertaken “specific contracted work for South Australia”.

“Members of our consortium are free to do so as independent agents,” she said.

“That association obviously makes them trusted because they’re aligned with the work that’s being undertaken nationally, but I am not directly working for SA.”

The Government has this week adjusted its rhetoric to suggest the modelling was undertaken by researchers who were “part of the broader Doherty network”.

McVernon, who is based at the University of Melbourne, said she first read Ross and Prowse’s modelling this morning.

She said a request was made to have Doherty modellers review the Ross and Prowse modelling to provide commentary, but she was “too busy” at the time.

“But, my colleague James McCaw, who is more of a technical expert than me, did review the modelling and provided comment at the time,” she said.

“I think this was last week before it went off so that there was some additional oversight, but that was reviewing it as a colleague, rather than being the leads on that work.”

The institute director said she spoke frequently with chief public health officer Professor Nicola Spurrier and recommended that she “develop a relationship with Josh Ross since the beginning of 2020”.

“It’s been helpful, I think, for many CHOs (chief health officers) to be able to fall on trusted modellers in their jurisdiction who can supplement the work that we do at a national level,” she said. 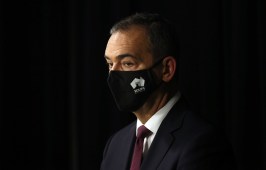 REVEALED: One in four chance of an outbreak when borders open

Ross and Prowse’s modelling showed South Australia would have a more than one-in-four chance of a COVID outbreak leading to between four and 51 deaths when the state opens its borders on November 23.

It found immediately removing ongoing restrictions could see the death toll soar beyond 400.