In a report addressed to Premier Steven Marshall and tabled in Parliament yesterday, the chairman of the State Government-owned Adelaide Venue Management Corporation wrote that his organisation had been “devastatingly impacted” by ongoing restrictions in Australia that had already lifted in other countries with higher vaccination rates.

Bill Spurr reported that the corporation, which operates the Entertainment Centre, Convention Centre and Coopers Stadium, last financial year suffered an 82.5 per cent reduction in pre-COVID events revenue, while professional sporting and local market events income was down 52.4 per cent.

“Our core business of contemporary live entertainment and business events has been decimated by restrictions on mass gathering and international and interstate travel,” the chairman wrote.

“AVM’s (Adelaide Venue Management’s) current situation is direr than at any time since the initial COVID-19 outbreak.”

Spurr wrote that the corporation entered April and May with “renewed confidence” spurred by “healthy levels” of booking enquiries from national and local clients.

But he wrote “any positivity and momentum was… quickly eroded” following the arrival of the highly-transmissible delta strain in the eastern states in June, as well as South Australia’s seven-day July lockdown.

“Prior to the Delta Strain, AVM was having considerable success in convincing its clients to postpone events rather than cancel outright,” Spurr wrote.

“However, as we move into 2021-22, we’ve witnessed that clients are now much more inclined to cancel, as many have become increasingly disillusioned and uncertain about when they’ll be able to plan their events with greater certainty.”

Spurr went on to state Australia’s low vaccination rates meant its “favourable competitive positioning” as an event destination had been “flipped on its head”.

“Until recent months, we were looked upon favourably by potential event organisers as a safe and desirable event destination,” he wrote.

“However, vaccination rates in many OECD countries have since reached much higher levels than here in Australia, resulting in many of these countries opening their borders to international visitors and staging events at pre-COVID capacities, without major restrictions.

“Whilst these countries are coming out of lockdown, Australia is imposing harsher restrictions on its venue operators and its people than at any time previously.

“Event organisers are now showing a strong preference for destinations with high rates of vaccination as opposed to low rates of infection.

“Consequently, Australia is at a competitive disadvantage for the first time since the onset of the pandemic.”

The AVM paid a $1.6 million dividend to the State Government last financial year, despite Spurr noting “near impossible trading conditions”.

The corporation reportedly entered this financial year in a “healthy financial position”, but Spurr warned “the potential impacts of the pandemic threaten to linger longer than perhaps many of us initially projected”.

“Assuming no other unforeseen circumstances or ongoing complications relating to the pandemic arise, we forecast that it will take some years before our business recovers to pre-COVID levels of revenue and profitability,” he wrote.

“AVM sees limited opportunities for tangible recovery until the vaccination program has been successfully rolled-out within Australia, and international travel returns to near pre-COVID levels.

“When that position is reached, the Adelaide Entertainment Centre is expected to recover relatively quickly, whilst the Adelaide Convention Centre will experience a more gradual recovery due to the longer booking lead times of conventions and exhibitions.”

A state government spokesperson told InDaily that South Australia “led the nation” in protecting local jobs and keeping people safe, but “there is no doubt the global pandemic has been tough on many sectors”.

“This is why the Marshall Liberal Government’s number one focus is on ensuring South Australia comes out of the COVID-19 pandemic safely so we can open up our economy, create even more jobs and have a normal as possible Christmas,” they said.

“Vaccination is our pathway out of the pandemic and the best thing anyone who has not yet had a dose can do right now is roll-up their sleeve as soon as possible.”

It comes after InDaily in August reported that AVM chief executive Anthony Kirchner sent successive all-staff emails urging employees to get vaccinated to ensure the corporation could “achieve its full potential”.

At the time, Kirchner wrote that in the context of “winning new business”, it was “becoming increasingly evident that venues are going to have to demonstrate that their staff are fully vaccinated against COVID in the not-too distant future”.

He was also critical in November of SA Health’s COVID management plan for the Adelaide Entertainment Centre, describing it as “unviable” and “unworkable”. 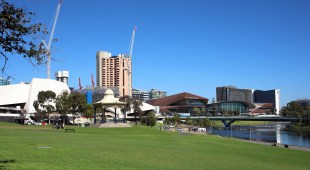 Get vaxxed to save SA events industry, staff told

Around 850 casual staff were stood down by AVM in March last year at the start of the pandemic, as the corporation was ineligible to receive JobKeeper payments.

In his annual report, Spurr wrote that casual staff “have had to do it particularly tough, unfairly so”.

“Yet the overwhelming majority have stuck with us and are as equally determined to ensuring AVM recovers from the pandemic,” he wrote.

“The Board is indebted for the loyalty afforded – they are a special group of people.”

Spurr also noted the Marshall Government’s election promise to build a new $662 million arena on the Riverbank, which would be operated by AVM, describing it as “of significant importance to AVM’s business and, much more importantly, to the long-term economic future of South Australia”.