Exports of bulk Australian wine hit a record value of $576.8 million in the 2020-21 financial year, up more than 11 per cent on the previous while bottled wine exports were down by about 15 per cent.

It is expected that bulk exports are again going to underpin Australian wine exports when the year to September 30 figures are released by Wine Australia this month, which are likely to reflect a further sharp decline in bottled exports to China.

Although bulk wine exports to China are not subject to government tariffs as they are shipped in containers of greater than two litres, the policy shift has not resulted in an increase in shipments.

This surge is expected to continue as wine originally earmarked to be bottled and sent to China becomes available to bulk or commercial producers, putting downward pressure on prices.

Interstate powerhouses include Casella, De Bortoli and Adelaide-headquartered Australian Vintage Limited, which produces most of its wine in New South Wales.

Many large commercial producers established bottling operations or partnerships overseas in the late 1990s and early 2000s to reduce shipping costs and move packaging closer to where the wine is consumed.

Bulk wine is traditionally exported in 24,000-litre containers. The same-sized shipping container could only transport up to 10,000 litres of bottled wine.

The UK and US have always been the largest overseas market for bulk Australian wine, which is often sold through major supermarket chains.

However, increasing prices of Australian wine in recent years caused by strong demand from China has until recently resulted in a reduction in bulk wine export volumes, particularly to the price-sensitive UK market.

While the dramatic recent demand and supply shift for bottled wine exports is bad news for many grape growers and small and medium-sized premium producers, it could be further good news for commercial exporters of bulk wine.

Stepney-based Austwine is a top 10 exporter of Australian wine and sends about 50 million litres of bulk wine each year mainly to North America and western Europe.

CEO Jim Moularadellis said the timing of Brexit, a free trade agreement with the UK and the impact of COVID-19 on wine buying patterns had all been factors in Britain.

“Prices are down because of the policy change in China so all of a sudden Australian wine has become much more competitive and I think there will be continued levels of good growth of Australian wine in the UK because of lower prices,” he said.

“Because the nature of the market has a bias towards shipment in large containers, the overall market has grown because of Brexit and the free trade agreement and therefore bulk wine has grown.

“During the pandemic, anything that was sold through supermarkets got a free kick but anything sold through restaurants, hotels and catering businesses fell flat and typically those are the more expensive wines that are typically packaged closer to the point of production rather than the point of consumption.” 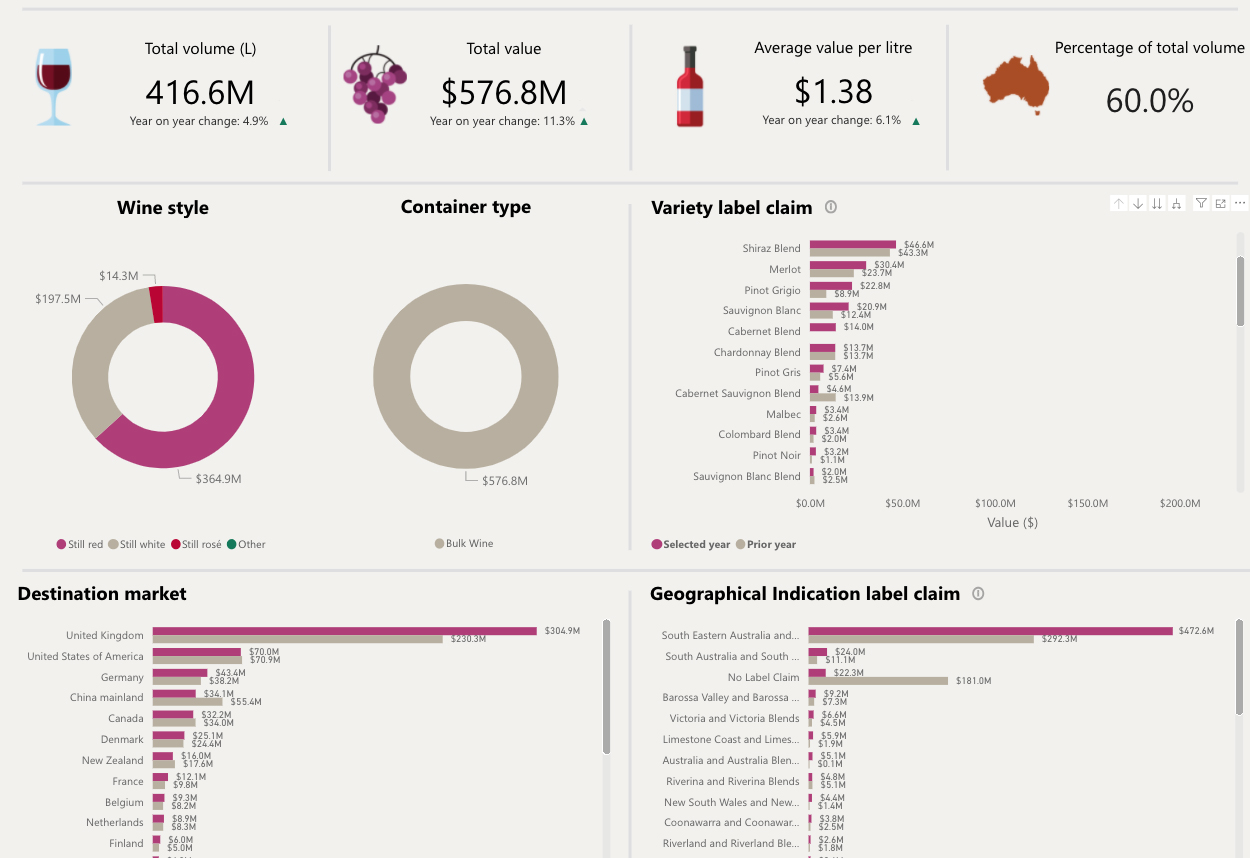 A Wine Australia snapshot of Australia’s bulk wine exports in the 12 months to June 2021.

By volume, bulk wine accounted for 60 per cent of Australia’s exports in 2020-21, significantly up on the long-term average of about 55 per cent.

But industry leaders expect Wine Australia’s 12-month rolling export data to show a reduction in the per litre price in the coming months as the full impact of the Chinese tariffs kick in.

The body is headed by former Riverland Wine chief Chris Byrne and aims to give producers in the three inland regions – which produce about 70 per cent of Australia’s wine – a united voice on how their vast combined industry levies are spent.

Moularadellis described the division between the commercial and premium sides of the Australian wine industry as “a case of the few and the many”.

“The few are paying the bills and the many have the voices so that new organisation is just trying to be more of a voice to the few that end up paying most of the bills, in terms of the research that is done and the levies that are collected.”

He said the strong view of the ACWP membership was that it was time the commercial side of the sector asserted its relevance in terms of its value to the Australian wine industry.

“We would like to progressively and respectfully have a little bit more influence over marketing programs and research and development programs to highlight the fact there are great opportunities across the inland because of the scale that we already have to really make great progress in terms of vineyard technology to reduce the cost of production, improve our competitiveness and also improve our environmental credentials,” he said.

Byrne said the Chinese tariff situation had been complicated by very challenging shipping issues caused by a shortage of containers and ships available to carry Australian wine overseas.

“So we’re seeing very significant delays and very steep increases in the cost of shipping because of the tightening of that container and shipping market,” he said.

“We’re also going to see a significant overhang of red wine in the coming 12 months – overseas markets are well and truly aware of that.

“The demand will remain but whether or not we can satisfy the demand because of the shipping is problematic and I think because of the overhang then inevitably the supply/demand circumstance is going to put significant downward pressure on price per litre of all Australian wine.”

Another complicating factor is the record 2021 vintage.

In a normal year, the high-quality bumper harvest of 2.03 million tonnes in Australia would be celebrated as a boon for the industry, especially as it followed two drought and bushfire affected vintages that depleted Australia’s wine inventories to their lowest levels since 2011.

However, this year’s record crop will replenish those stocks and more, prompting wine companies to already reassess their grape contracts for 2022.

Byrne said this meant many producers that had made red wine initially grown for export to China was beginning to bolster bulk wine stocks.

“The wine is still there in tanks and it’s got to be cleared otherwise we won’t have room to take in next year’s vintage and that basically means making it available on the bulk market and selling it at a rate per litre rather than an amount per case,” he said.

“The ongoing effect of China will continue to be very significant until more of the premium product can achieve the sort of levels of diversification that are necessary to spread their products more evenly in export markets.”