Marshall over the weekend announced that South Australia would reopen its borders to coronavirus-hit states once double-vaccination rates hit 80 per cent, with the caveat that travellers from LGA-specific exposure locations could still be locked-out from the state.

The Government hopes to achieve 80 per cent vaccination coverage in time for Christmas, with the state’s double vaccination rate currently sitting at 41.2 per cent.

However, the rollout remains unevenly distributed, with latest federal government data showing vaccination rates in parts of Adelaide’s northern suburbs are more than 20 per cent behind the state’s inner-metropolitan and southern suburban areas.

The data, accurate as of Sunday, shows the LGAS of Orroroo/Carrieton, Burnside and Victor Harbor have first-dose vaccination rates over 73 per cent, but first-dose coverage in the District Council of Grant is just 16.9 per cent.

Marshall told reporters this morning that the Government needed to take “corrective action” to address the uneven distribution across local government areas before it started lifting borders or easing restrictions.

“What we need do… is recognise we don’t just want to have an average of 80 per cent but have real pockets where there is a lack of balance,” he said.

“We need to get some equity across that and I don’t think it will be the day we hit 80 per cent.

“I think we need to make sure we’re working all the way through to that date to make sure that we’ve identified vulnerable communities and I think that’s what we’re doing at the moment.

“When we see a LGA which has maybe got a lower vaccination rate we’ve got to take corrective action.”

The disparity comes after the State Government last week announced it would open a new pop-up vaccine clinic in Pooraka offering 1500 Pfizer appointments.

The Government hopes the clinic will lift vaccination rates in northern suburbs councils such as Playford, which has only reached a first jabbed rate of 43.2 per cent and Salisbury, which has a population of more than 110,000 but has only reached 49.3 per cent on the same metric.

The Opposition meantime has called on the Government to extend its consultation with multicultural community groups in the northern suburbs and to establish mass vaccination clinics in the western and north-eastern suburbs.

Marshall said once vaccination rates lift across the state, the Government would “carefully” consider modelling from the Doherty Institute to plan the trajectory away from COVID restrictions.

But he cautioned there wouldn’t be a designated “Freedom Day” when all restrictions would be removed.

“We’re still going to have to have isolation for those people who have got the illness and their close contacts – that’s going to be an important part of what we do as we open the borders,” he said.

“We’ll also have to have some base-level public health social measures that remain in place.

“But, we cannot keep Australia locked-up forever – we’re going to have to learn to live with this.

“As we get closer to the 80 per cent double vaccination rate for those 16 and over we know that we’ll be very significantly reducing the transmission of this disease and we also know that when you get this disease after you’ve been vaccinated you develop far more simple symptoms.”

It comes after leading epidemiologist Professor Adrian Esterman warned South Australia “will never be back to pre-COVID” and residents will have to learn to live with restrictions such as social distancing and mask-wearing well into the future.

Meanwhile, Western Australian Premier Mark McGowan said he was “likely” to close his state’s borders to South Australia if it reopens to eastern states at the 80 per cent vaccination rate.

McGowan, whose government has developed a reputation over the course of the coronavirus pandemic for taking a cautious approach to instate COVID-19 outbreaks, said South Australia “may regret” its decision to open up.

“Obviously if South Australia then has community spread of the virus, they may regret that decision,” he said.

“If they do, obviously we’d take health advice but we’d most likely close to that jurisdiction.”

But Marshall hit back this morning, saying if Western Australia kept its border closures in place it would become “very isolated”. 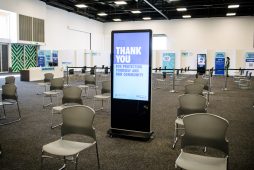 “I’m just going to continue to back the methodology that we’ve put in place since day one.

“Other premiers can sort out what they want to do in their state.”

– with additional reporting by Tom Richardson