A government spokesperson said the vacant properties had recently become available after they were renovated, with the Government planning to move vulnerable families in over the coming four weeks.

A further eight people with complex needs will be moved into specialist public housing in Brooklyn Park, where they will receive mental health support and drug and alcohol counselling as part of a 15-month trial.

Those who are allocated housing will be accommodated in hotels or motels until their properties are ready.

It comes after InDaily reported last month that members of 310 households who were sleeping rough or experiencing violence or abuse at home when the lockdown started were moved into temporary motel accommodation.

At the time, Human Services Minister Michelle Lensink said the Government would “prioritise clients into housing”, with the aim to have “as many people housed as possible”.

The Government has since assessed all 310 households and selected the “most vulnerable cohort” to move into the 100 available public houses.

It said the remainder would be given “appropriate housing support”.

Lensink said the Government’s new homelessness alliances would help those who are housed to maintain their tenancies and provide them with mental health support.

“While South Australians were in motels again during the latest seven-day lockdown, it gave our homelessness support services another opportunity to work with a large number of people to help them stabilise their lives and support them to move into safe and stable accommodation,” Lensink said.

“Thanks to our new homelessness alliances, along with support from the SA Housing Authority, who worked quickly and collaboratively during the state’s latest seven-day lockdown to support our most vulnerable.

“The results speak for themselves and it continues to highlight that if we work together, we’ll get some great outcomes.”

But Opposition Human Services spokesperson Nat Cook said there were “at least 200 households who were now returning to homelessness, unsupported and with an uncertain future amidst winter and a pandemic”.

“It shouldn’t take a lockdown to start securing housing outcomes for people experiencing homelessness,” she said.

“This is a failure of the Government”.

InDaily asked Lensink what “additional housing support” would be offered to the approximate 200 households who would not be moved into public housing.

Lensink responded: “Labor and Nat Cook claim to care about our most vulnerable yet sold a whopping 7,500 public homes worth $1.5 billion over 16 years.

“That’s 7,500 South Australians who could have a roof over their heads right now.

“Unlike under Labor, we’ve supported a record number of our most vulnerable South Australians into safe and stable housing during the pandemic, we’re spending millions in record public housing maintenance and fixing the system – and our homes – they left to rot.”

During the height of the pandemic last year, the Government moved 250 people experiencing homelessness from motel accommodation into longer-term housing.

However, not everyone who was placed into motel accommodation was moved into public housing, with the Government reporting as many as 542 people experiencing homelessness were in motels in July last year.

Some chose not to engage with services, while others found housing on their own accord.

According to latest Federal Government data, there were 32,147 public housing properties in South Australia last year, but 271 of those were deemed “untenantable” and 246 were undergoing major redevelopment.

Latest data from the Adelaide Zero Project shows there were 266 people who were actively homeless in the CBD in June – an increase of 29 per cent from the month before.

Meanwhile, the number of people who were sleeping rough on the streets increased by 50 per cent between May and June. 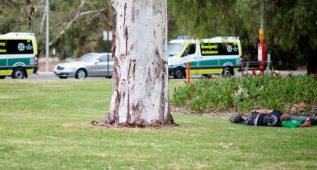 Move to shift rough sleepers from motels to housing after lockdown

But Lensink said the increase was due to homelessness providers auditing their active client lists as part of the state’s recent transition to new homeliness alliances.

A government media release stated the data reflected “greater accuracy and awareness of who was homeless, rather than a spike in homelessness”.