The SA bid, spearheaded by Green Adelaide and Environment Minister David Speirs, was launched in 2019 and is expected to be formally submitted at the end of the year.

The bid will be assessed against 23 criteria, including whether the push has sufficient public support and if the city has “meaningful policies” in place to “protect, increase and enhance nature, culture, heritage, the environment and public space”.

But in a letter submitted to the National Park City Foundation, Adelaide Park Lands Association President Shane Sody said South Australia’s bid should be “marked down on each of these criteria”.

“The purpose of this letter is to urge you to reject this application, on the basis that the Government of South Australia has an anti-Parks agenda,” Sody wrote to the foundation on Monday.

“It is actively working against the principles of the Universal Charter for National Park Cities.”

In his submission, Sody lists eight projects the State Government has “supported or enabled” that have resulted in, or will soon result in, “encroachments on the Adelaide Park Lands”.

Sody asked the Foundation not to offer an “imprimatur or endorsement” to the “ongoing relentless process of diminishing Adelaide’s greatest asset”.

“I urge the National Park City Foundation to insist that recognition as a National Park City can occur only when the South Australian Government takes meaningful steps to stop continual plunder of the Park Lands by its own agencies and put in place enduring legal protection for this irreplaceable green asset,” he wrote.

In a release later on Monday, the Park Lands Association – self-described as the “watch dog” of the heritage listed space – said it had advised the London-based foundation that Adelaide’s bid “cannot be taken seriously” due to ongoing “State-sponsored Park Lands attacks”. 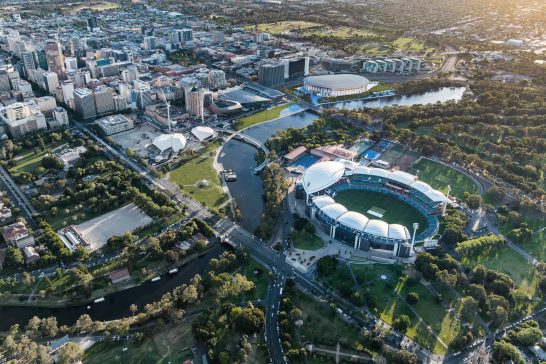 A spokesperson for the State Government said the Park Lands Association’s opposition to the bid was “extremely disappointing”.

“Becoming a National Park City is an historic opportunity to further promote Adelaide on the world stage as well as providing environmental, economic and wellbeing benefits for future generations,” the spokesperson said.

“This is something that’s being done alongside the community including local leaders from the environment, industry, government sectors and the Kaurna Nation.

“Our push to become a National Park City has received broad support and the Adelaide Park Lands Association’s opposition to this is extremely disappointing.”

The spokesperson defended the Government’s track record on the environment, pointing to the creation of Adelaide’s second metropolitan national park in Glenthorne and another on the Fleurieu Peninsula.

“Once all of our changes take effect we will have more than doubled the area protected by national parks from 3.90 million hectares to 7.86 million hectares since coming into government,” the spokesperson said.

Green Adelaide Presiding Board Member Professor Chris Daniels also labelled the Association’s opposition to the Park City recognition “disappointing”, saying everyone must work together to “balance” the health of the environment with the city’s developments.

“It’s disappointing to see the Adelaide Park Lands Association stance against our city’s bid to become a National Park City, as the title will bring further investment for our city to become even more liveable,” Daniels said.

“We must use the spirit of National Park City to influence thinking and initiative innovative development.

“We must embrace modern and alternative ways to support nature such as by building green walls, designing better ways to manage water and creating alternate habitats for animals.”

The park lands received National Heritage Listing in 2008, while talks continue between the Adelaide City Council and the State Government over a potential World Heritage bid for the site.

The National Park City Foundation states that for a bid to be successful, “it needs to have the backing of the people who live in and the people who govern the city”.

Other cities campaigning for the recognition include Galway, Ireland; Newcastle, England and Glasgow, Scotland.

The Foundation says it hopes to recognise 25 national park cities by 2025.