Premier Steven Marshall told reporters at this morning’s COVID-19 press conference that today’s two new positive cases are a brother and sister aged in their 20s, who visited the Tenafeate Creek Wines exposure site in One Tree Hill on Sunday afternoon between 1.45pm to 4.30pm.

He said the two new cases were detected after 17,592 test results were provided yesterday – the highest daily number in South Australia since the start of the pandemic.

The Modbury Cluster has now grown to 14 cases, forcing approximately 4000 people into quarantine out of a total 13,610 people who visited exposure sites.

Spurrier said the seven positive cases linked to the Tenafeate Creek winery were not related to each other, but they were all dining indoors.

“We will be able to obtain CCTV footage (and) we need to find out if there was outside dining areas as well,” she said.

Of the 125 people who visited the Tenafeate Creek Wines exposure site, only 34 people have been tested.

The other exposure site of highest concern, The Greek on Halifax restaurant in Adelaide’s CBD, was visited by 91 people during the period of concern, but only 53 people have so far been tested.

“This is very critical for me and because of these being a high-risk location what we’re doing at the moment is moving all of those people into the medi-hotel facility,” Spurrier said.

“In my perspective, from a public health perspective, those people are at least the same if not at slightly higher risk of getting COVID than some of our international travellers at the moment.

“We will be treating those in the same way.”

Spurrier said anyone who visited the Greek on Halifax restaurant or Tenafeate Creek Wines would be put up in a medi-hotel today.

Only one positive case linked to the Modbury Cluster – a man in his 80s whose infection started the outbreak – is in hospital.

The rest are in quarantine at the Tom’s Court medi-hotel, which is a designated facility for positive cases.

Marshall said it was “way too early to say” whether South Australia would extend the seven-day lockdown, but noted today’s low case number was “very encouraging”.

SA Ann’s College in North Adelaide is no longer considered an exposure site, while exposure areas at Westminster School have been revised.

Spurrier said any new cases detected later today would be announced at a press conference at about 11am tomorrow.

State emergency coordinator and SA Police Commissioner Grant Stevens told ABC Radio Adelaide this morning that the State Government was developing a digital booking system so that people can secure COVID-19 tests at clinics ahead of time.

“The Department for Premier and Cabinet – the Office for Digital Analytics I think it is – is working on a digital booking system (so) that people can go book a time,” Stevens said.

Stevens said he was unsure why the Government had not developed the digital booking system sooner.

It comes after hours-long queues returned to the 86 testing clinics across the state, as new exposure sites force thousands into mandatory home quarantine and testing.

People once again queued at 24-hour testing sites such as Victoria Park overnight, with some tweeting wait times of up to 12 hours. 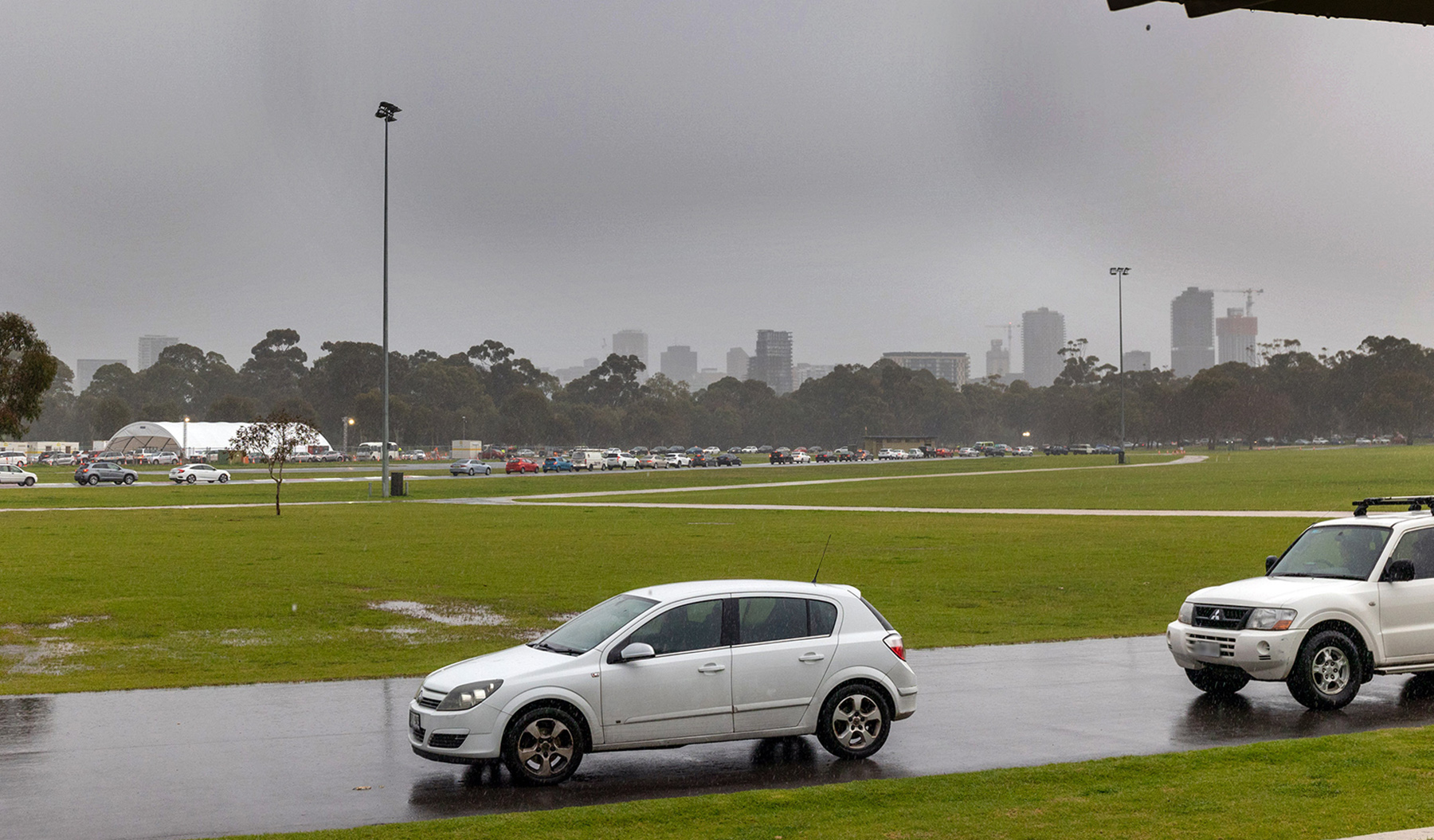 Marshall thanked people for their patience and acknowledged that there had been “extraordinary frustrations” with the testing conditions.

He said authorities expected the testing demand to “level off” as people who were required to get tested after arriving from New South Wales and Victoria end their 14-day quarantine.

“We certainly apologise for any delay,” he said.

“What we have seen though is an increased surge in demand in a very short period of time.

“The increase in demand has completely outstripped that capacity increase that we provided yesterday.

“I’m hoping today that we get it back into balance as we take that New South Wales and Victoria cases out of needed testing.”

Marshall said that the Government needed to do a “much better job at telling people about the likely wait times”.

SA Police Commissioner Grant Stevens said he had deployed a “discrete group of specialist police officers to work alongside SA Health to see if we can identify an immediate remedy to the queuing situation while SA Health will work on a longer-term plan that will see this being managed going forward”.

“I supposed this is like a short-term fix that we’re trying to identify,” he said.

“I don’t know if we’ll come up with a solution, but we thought we could reach in, allow SA Health to come up with the really important work of coming up with a permanent solution.”

The State Government has asked the Australian Defence Force to deploy 36 personnel to assist with swabbing at testing sites today.

The ADF staff will be split into three teams of 12 people.

Queues for a covid test are again snaking around Victoria Park. These cars have been here all night – waiting 13/14 hours. @TheTodayShow @9NewsAdel pic.twitter.com/07TMzGMK1i

Marshall told ABC Radio Adelaide that the ADF would deploy a “realistic number” of workers, “given the medical capability that they’ve got”.

“Not everybody can just do those swabs – you need to have medical training,” he said.

“We’re aware of the capacity that they’ve got here and that was the logical request to be made.”

Marshall said the Government was “pulling every single lever possible to get medical staff on the front line to put it back into balance as quickly as possible”.

He said SA Health and SA Pathology staff had been redeployed to assist at testing sites.

SA Health had opened up a new testing site at Lot Fourteen in the city, but that clinic, which is only for people who require priority testing, was forced to close today due to the wet weather.

“It is really more about trying to get a streamlined process for those very high priority cases,” he said.

Shadow health spokesperson Chris Picton said the Government should extend the opening hours of at least five testing sites in the metropolitan area.

“At a bare minimum, the Marshall Liberal Government must ensure there are five 24/7 testing sites during the course of this lockdown to ensure everyone who needs a test can get tested in a timely manner,” Picton said.

“Not only is this an awful situation for those people waiting up to 12 hours for a test, but the worst outcome would be someone not coming forward because of the waits.”

The owners of Tenafeate Creek Wines says they’re “devastated” after being listed as a COVID-19 exposure site, with staff now in 14-days quarantine.

SA Health listed the One Tree Hill winery as an exposure site on Monday after a positive case attended the cellar door on Sunday afternoon from 1.45pm to 4.30pm.

Tenafeate winemaker Michael Costa, son of winery owner Larry, said the family was upset about the health situation, but had been overwhelmed by the public’s support.

“Partly due to all the support we’re getting at the moment, we’re just getting inundated with phone calls, messages, email, Facebook messages – everyone’s very very supportive.

“Obviously it’s out of everyone’s control and you’ve just got to follow the guidelines and all the protocols and everything from the authorities and go from there.

“Just trying to keep the head up high and just one step at a time really.”

Authorities are conducting a deep-clean of the winery today.

Costa, who was not at the winery on Sunday, said he was contacted by SA Health on Monday about the positive case.

“It was obviously a shock,” he said.

“From there, we just had to follow procedures and protocols, staff, who was there, the whole bit.”

He says all “five or six” staff who were working on Sunday had tested negative so far and were in isolation, along with his parents.

“Our main concern is the safety and wellbeing of everyone involved, that’s what we’re devastated about,” Costa said.

“I’ve contacted my accountant and everything to see what sort of support we can get, more so for our staff.

“We’ll just try and keep the business ticking along, we’ll get the [wine] orders out, and it’s one step at a time really.”

Marshall said he was expecting the public to support businesses once the lockdown is completed.

“The exposure sites that have been named will be really feeling it at the moment,” Marshall said.

“What we’re encouraging people to do is to show that kindness to these businesses once we come out of this so that people can get back to a sense of normality as quickly as possible.”

Over 100 police staff in quarantine

Stevens said about 115 police officers and other SA Police staff are currently in 14-day quarantine because they visited exposure sites.

That number includes up to four officers at the Thebarton Police Barracks after a staff member at that site identified as “possibly being a close contact” of a positive case.

“As a normal precaution, that person was sent home, the people that they worked directly with have been sent home until we go through the COVID testing and confirm that they were negative at the time being at work,” Stevens said.

“There is no disruption to services at our Thebarton Barracks, so everything is looking pretty good at the moment.”

Stevens said having 115 staff out of action “does cause a drain, but we have a daily workforce meeting to determine what our priorities are and where we need to put people on”.

Victoria has recorded 26 new locally acquired cases of coronavirus a week into its statewide lockdown.

It is the state’s highest daily total of the current outbreak and follows the 22 cases reported on Wednesday.

The Victorian Health Department has confirmed today’s new infections are all linked to the current outbreak of the highly contagious Delta variant, which originated in New South Wales and now totals 133 cases.

Meanwhile, NSW recorded 124 new cases overnight – the highest daily total of new infections since the outbreak in that state began on June 16.

Forty-eight cases were in the NSW community while infectious.