But forecasts of heavy rain, strong winds and a possible thunderstorm and lightning forced organisers to cancel Thursday and Friday’s Light Cycles sessions, advising that ticket-holders would be contacted directly about refunds and exchanges. It will now open tomorrow night.

Illuminate’s free City Lights trail – a series of installations and projections across three CBD precincts that includes some inflatable elements – was to have been switched on tonight but this has also been postponed until tomorrow.

The severe weather warning saw Adelaide Zoo cancel Thursday and Friday’s sessions of Light Creatures, an Illuminate Adelaide after-dark experience featuring giant lanterns and lighting effects. “While Light Creatures is a winter-friendly event and capable of withstanding most weather types, the predicted high wind speeds are unsuitable for our lanterns,” the zoo said in a statement on social media.

Illuminate Adelaide co-founders and creative directors Rachael Azzopardi and Lee Cumberlidge told InDaily that it was the unpredictability of the weather, and specifically the threat of lightning and high winds, that forced them to announce the Light Cycles postponement late yesterday afternoon.

“We had been talking to the SES and BOM constantly and the weather patterns were not changing, they were just getting stronger, so we decided for everyone’s safety it was best to postpone,” Azzopardi said this morning. 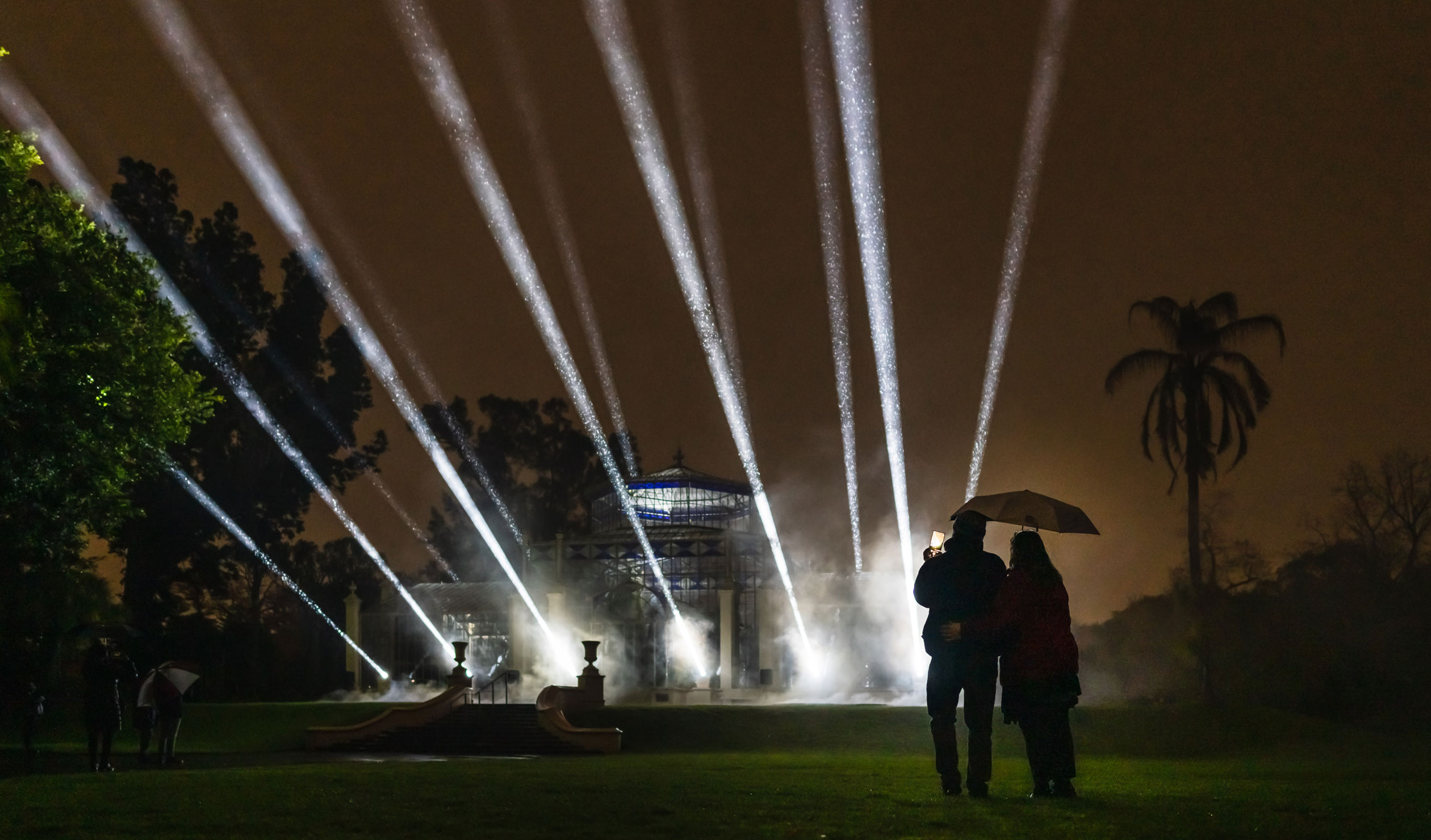 A taste of what to expect when Light Cycles does open. Photo: Moment Factory

However, the creative directors encourage people not to be deterred by rain at future sessions: “We saw Light Cycles in the rain the other day [during testing] and it was just stunning,” Cumberlidge said.

Indoor Illuminate events – including the Van Gogh Alive digital gallery and other exhibitions, Adelaide Festival of Ideas (which opened last night), and the Square Circles VR experience at Queen’s Theatre – are going ahead as planned.

Azzopardi and Cumberlidge told InReview at the start of this week that they were overwhelmed by the response so far to their inaugural 17-day festival, with tickets selling strongly across the program ahead of its opening.

They said today tickets for some indoor events were now being reallocated due to South Australian authorities tightening the density cap for indoor venues.

The ongoing COVID-19 challenges have also impacted the Adelaide Guitar Festival. It announced this morning that a special concert featuring Archie Roach – scheduled for Her Majesty’s Theatre tomorrow night – has been postponed indefinitely due to the unfolding situation in Victoria, while blues & roots musician Ash Grunwald’s Saturday night performance at the Dunstan Playhouse has been postponed until October 15. Grunwald was also to have appeared at the festival’s On the Road event at Cleve this Sunday, with the line-up now changed to include SA musician Banjo Jackson.

Other Guitar Festival concerts affected by interstate travel restrictions include touring show The Stones’ Sticky Fingers, and a performance by the Melbourne Guitar Quartet.