The online petition, which is advertised on the National Trust’s website, was started three weeks ago and has so far collected just under 4000 signatures.

It calls on the State Government to “rescind its eviction notice and fulfil its commitment to the National Trust for an ongoing long-term lease and funding for its vision of a world class and wholly public cultural destination for the future”.

InDaily reported last month that Environment Minister David Speirs had handed the National Trust a termination of lease letter on June 10, giving the not-for-profit organisation 31 days to pack up its public museum and vacate Ayers House ahead of a $6.6 million taxpayer-funded renovation.

Once the restoration is complete, the government-affiliated History Trust of SA will move into the circa-1846 North Terrace building from its existing base at the Torrens Parade Ground.

The History Trust has been handed $1.5 million for a new office fit-out at Ayers House – on top of the $6.6 million to be spent on building upgrades.

The National Trust has been the caretaker of Ayers House since 1972 on a lease arrangement with the State Government, after the building was transformed from a nurses’ quarters into a public museum, restaurant and function centre.

During that time, the National Trust has collected thousands of historical objects, which are on display at its public museum.

“The Ayers House Museum is one of the finest nineteenth century house museums in Australia, staffed largely by volunteers and operating for 50 years without any government funding,” the National Trust’s petition states.

“It is a unique historical environment, much loved by international tourists and local children alike.

“Now, the government wants to replace the museum with government offices and extended private catering facilities.

“To do this public access will be curtailed and the work done by the National Trust and thousands of volunteers, donors and staff over 50 years will be lost.”

Speirs told InDaily that the Government was making “one of the most significant investments in the state’s history with our $6.6 million restoration of Ayers House”.

He said the restoration would “bring this grand old building to life, securing its future”.

“I fail to see how an organisation such as the National Trust could be actively campaigning against this once-in-a-generation opportunity,” he said.

“I thank the National Trust for nursing this wonderful building through the last 50 years, but now is the time for an exciting new chapter, with the History Trust charged with securing its precious heritage, telling the story of Ayers House and creating a new hub for history story telling in South Australia.”

Speirs has previously told InDaily that the Government was not evicting the National Trust, rather its one-month reoccurring lease had come to an end.

He also said that the Trust was first made aware of the Government’s intention to end the lease about six months ago.

In a letter to Morgan last month – seen by InDaily – Speirs wrote that he understood that lawyers acting on behalf of the National Trust had written to the Crown Solicitor’s office about the termination of the Ayers House lease. 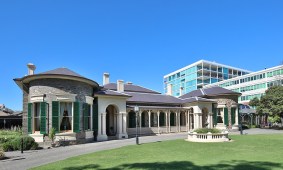 He wrote that he was “prepared to have discussions” with the National Trust about giving it extra time to move out of Ayers House.

Education Minister John Gardner, whose department provided the additional $1.5 million in the State Budget to relocate the History Trust to Ayers House, told InDaily that the funding would be used for a new office fit-out, amenities upgrades and electrical and IT cabling.

He said the $6.6 million provided by Speirs’ department would cover “major building works” such as accessibility improvements, a lift, air-conditioning and fire services upgrades.

“The History Trust funding also covers works to create office space for a small team to be based at the State Library of SA,” he said.

“The History Trust is excited about the future opportunities that these new locations will bring.

“The increased activation of Ayers House will reaffirm the importance of this heritage treasure.”