Ridgway, who quit the frontbench last year, will replace high-profile advertising executive Bill Muirhead – who has been in the job since 2007.

Ridgway last night resigned his Upper House seat, and will take up the three-day-a-week role – initially in SA – later this month, before moving to London on a three-year term.

The move will also create new Liberal intrigue about who will fill the casual vacancy, with Property Council SA executive director Daniel Gannon – a former adviser to Premier Steven Marshall – expected to headline a list of contenders.

But he will face competition, with state executive member Sue Lawrie already confirming her nomination.

Marshall said in a statement that Ridgway was “well positioned to be South Australia’s 26th Agent General”.

“He has undertaken a variety of roles throughout a nearly 20-year parliamentary career, including being appointed the Minister for Trade, Tourism & Investment in 2018 and Member of the Executive Council until 2020,” he said.

“Prior to this, Mr Ridgway was a successful farmer, horticulturalist and exporter, with a strong understanding of South Australia’s markets and opportunities.

“He has a wealth of knowledge on the international stage that will put South Australia in good stead as we take full advantage of the new Free Trade Agreement between Australia and the UK.”

But the appointment will come under heavy scrutiny given Ridgway’s obvious Liberal Party credentials – and the fact Marshall shifted him from the Tourism portfolio early last year, taking the reins of the ministry himself.

Opposition Leader Peter Malinausakas told InDaily the Premier was “clearly using the cover of COVID to announce one of the most outrageous and controversial appointments in the state’s history”.

“The Agent General is a prestigious and prominent role promoting SA commerce and business overseas – and now he’s appointing someone who he sacked from the tourism portfolio,” he said.

“Bill Muirhead is widely known as one of the most successful and well-connected businessmen, and he’s now being replaced by a disgraced tourism minister who Steven Marshall sacked from the role.”

Ridgway left the ministry altogether some months after he lost the Tourism portfolio, a day after it was revealed by NewsCorp that he had signed blank time sheets for his SA-based chauffer while away on business overseas.

His resignation coincided with those of Stephan Knoll and Tim Whetstone, who stood down amid last year’s parliamentary entitlements scandal.

But Ridgway told InDaily he stood by “my track record of 20 years in parliament, being involved in most economic portfolios as a shadow minister and minister”.

He said a newly-signed free trade agreement presented a “huge opportunity” for SA and was the “beginning of a new era”.

He also pointed to “family connections over there as well” – his daughter Tara is married to England cricket star Eoin Morgan.

“There’s always people who want to offer criticism, but I’m qualified for the job – and the Premier and cabinet have made the same decision,” Ridgway said.

“I look forward to doing what I can to grow the SA economy.”

Malinauskas questioned whether the appointment was “on anything remotely close to merit”, saying it was instead “trying to create a vacancy for a Steven Marshall acolyte in the Upper House”.

The vacancy is set to be tight-fought, against an intriguing backdrop of an influx of Right-leaning Liberal Party members, with at least two branches sending new conservative-aligned delegates to state council in recent weeks.

Further complicating the replacement is the likelihood of a reconfigured state council when the Liberal Party meets for its AGM in August, with sources certain the moderate faction will be keen to formalise the casual vacancy before then.

Gannon declined to comment today but is understood to be considering nominating. 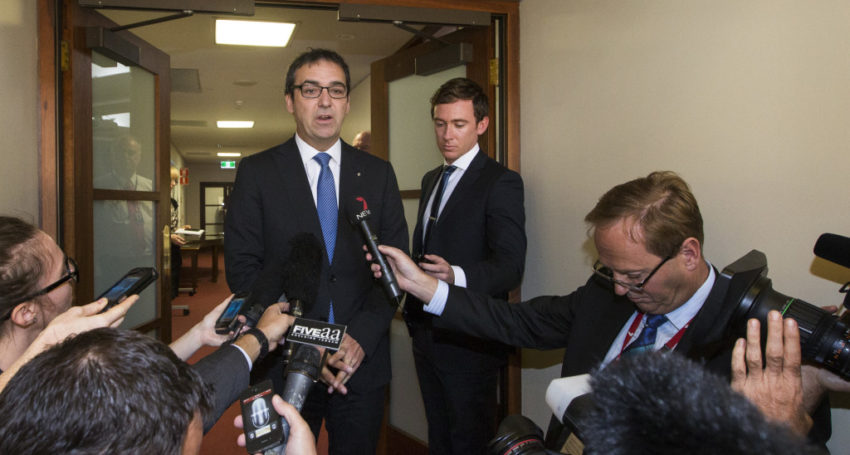 Insiders believes chartered accountant Heidi Girolamo, who is already on the party’s Upper House ticket – albeit in the unwinnable fifth spot – is the Right faction’s likely pick for the role, although Grain Producers SA boss Caroline Rhodes and lawyer Morry Bailes have also been mentioned as potential nominees.

Outgoing Agent-General Bill Muirhead’s term ended earlier this year but he was given a short extension until the end of June.

He is expected to spend more time in Australia, and was this week appointed to the University of South Australia’s governing council.